The attention of the Movement for the Emancipation of the Niger Delta (MEND) has been drawn to an allegation by Chief Raymond Dokpesi, the Director General of the presidential campaign for former Nigerian military leader Ibrahim Babangida claiming that MEND issued a threatening statement directed at him.
For the record, there has never been a statement from MEND directed at Chief Dokpesi or anyone involved in the 2011 presidential race.
The group is apolitical and our focus remains fighting the injustice in the Niger Delta.
Chief Dokpesi may be misinformed into believing that statements from an association of miscreants calling itself the Joint Revolutionary Council (JRC) with false claims of affiliation with MEND is true.
We reiterate that we have no knowledge of any group known as the Joint Revolutionary Council or JRC. The public should ignore statements to the contrary.
Jomo Gbomo
Posted by PublicInformationProjects at 08:12 1 comment:

News Release: Position Of Igbos Resident In Lagos On The 2011General Elections 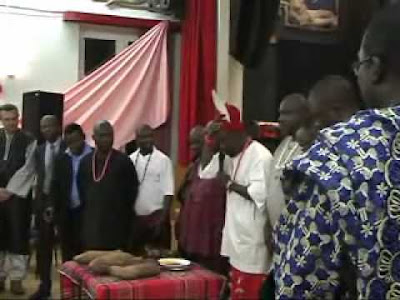 The position of Igbos resident in Lagos concerning the 2011 General elections is as follows:

1. All Igbo eligible voters must register at their residential registration centres to enable them vote without being hindered by the no-movement policy that usually comes up during the voting days.

2. Considering the fact that ACN and PDP political platforms would not avail their platforms to Igbo aspirants, African Renaissance Party (ARP) and others have been secured to provide the needed platforms.

3. Igbos in Lagos are out to vote for their kiths and kin in all positions save the position of governor and will vote en mass for any political party that picks an Igbo candidate for the office of Deputy Governor.

I thank you very much.