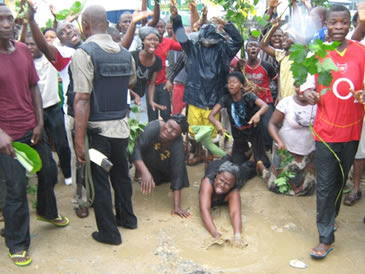 The Nigerian government must set up an independent commission of inquiry to investigate the use of firearms by security forces that left at least one person dead and 12 seriously injured at in the southern city of Port Harcourt, Amnesty International has said in a new report.

Port Harcourt Demolitions: Excessive Use of Force Against Demonstrators details how on October 12 2009, armed security forces opened fire on a crowd of people peacefully protesting against the proposed demolition of their homes in Bundu community, Port Harcourt, Nigeria.

"The excessive use of force seen in the Bundu shooting is just one of many examples of the brutality with which the police and army operate throughout Nigeria," said Lucy Freeman, Amnesty International's Nigeria researcher.

"But few officers are held accountable and in most cases no investigation is carried out."

The 18-page report offers eye witness accounts from the victims of the Bundu shootings as well as from women who were intimidated and beaten by security personnel.

"The soldiers started shooting again but this time, they fired shots into the crowd. I was shot on my left thigh," recalls 34-year-old Tamuno Tonye Ama.

"We tried to run away but there was nowhere to go. Soldiers kept firing and charged towards the crowd and people were now running all over the place."

Amnesty International has gathered clear evidence that the security forces opened fire, shot and injured several people on 12 October, however the governor of Rivers State told Amnesty International that "there was no firing, no shooting and no-one was killed or injured on the day. In fact, nothing happened at all."

"The issue of impunity is one that is all too entrenched in Nigeria," said Lucy Freeman. "The government cannot keep turning a blind eye to the human rights atrocities committed by its security forces."

The excessive use of force by Nigeria's security forces in Bundu waterfront community is contrary to Nigeria's international human rights obligations and commitments.