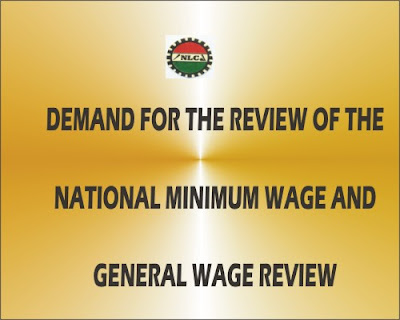 The Trade Union Congress (TUC) and the Nigeria Labour Congress (NLC) note with deep regret, the decision of the National Council Of State to technically repudiate the National Minimum Wage Agreement. It is amazing that in a country where the least paid councillor earns over N120,000 monthly, the Council is of the opinion that N18,000 is too much for a worker with his spouse and four children to earn.

The N18,000 Minimum Wage is the outcome of the Tripartite Committee On The National Minimum Wage established by the Federal Government and inaugurated on July 14,2009 by the Secretary to the Federal Government. It is worthy to note that the state governments were represented in the Negotiating Committee and that the average minimum wage suggested by the thirteen state governments that submitted memoranda was N22,500.

It is therefore shocking that the N18,000 National Minimum Wage Agreement which was signed on behalf of the Federal Government by four ministers including those of Labour and Finance, representatives of the state governments, labour and private sector employers can be cast aside.

The TUC and NLC holds that the part of honour lies in government respecting the spirit and letters of agreements it freely enters and that if the outcome of negotiations are not respected by government, it would be an invitation to anarchy.

Ordinarily, following the agreement which also included a draft bill, the procedure would have been for government to send the bill to the National Assembly to pass into law. Surprisingly, Government after six months is still foot dragging. Given the foregoing, and the setting up a ‘technical’ committee, the inevitable conclusion is that our political leaders in the Council are not advised on the plight of the common man and the urgency required in the implementation of a new minimum wage in the country.

Therefore, the NLC and TUC reiterates their directives to all workers to embark on the three-day warning strike from Wednesday 10th November to Friday 12th November, 2010. This is preparatory to the indefinite strike that will follow should Government refuse to implement the Minimum Wage Agreement.

We also call on all persons of goodwill including leaders of thought, religious and community leaders to prevail on Government to respect the Minimum Wage agreement and prevent an overheating of the system.