The Institute of Human Rights and Humanitarian Law (IHRHL) wishes to express its support for the Academic Staff Union of Universities (ASUU) strike at the Rivers State University of Science and Technology, Port Harcourt.
The IHRHL observes that the standard of education has experienced a free fall in the past decade due to gross neglect of the education sector by the government, poor remuneration of lecturers, inadequate infrastructure, poor teaching methods to mention a few. In the light of the foregoing, the Academic Staff Union of Universities (ASUU) embarked on a strike to press home their demands for increased government commitment in the educational sector.
The IHRHL notes that contrary to what the Executive Governor of Rivers State would have us believe; the ongoing ASUU strike is not just about increase in Lecturer’s salaries, rather it is an agitation for a full package that seeks to improve the standard of education in Nigeria. Thus, recent utterances by the Executive Governor of Rivers State to mobilise one million youths against the lecturers is an insult on the efforts of the Lecturers to improve the diminishing standard of education in Nigeria and is capable of instigating violence in an already overheated environment.
The IHRHL further observes that it is rather appalling that the present strike is being allowed to drag on in a state like Rivers State where the government had consistently and continuously boasted to the electorates that it has revamped the educational sector in less than three years. More atrocious though is the fact that the State University of Science and Technology has fallen behind other Universities because of incessant strikes occasioned by the failure of the government to meet their demands.
The IHRHL further notes that some of the components of the realisation of the right to education as enshrined by the African Charter on Human and people’s rights is the provision of an enabling environment for learning, provision of basic infrastructure like laboratories, libraries and ensuring that the teachers are adequately motivated. Thus, when students are meant to stay at home because of the inability of the government to adequately motivate their lecturers, their right to education is being breached.
The IHRHL wonders why implementing the salary agreement is such a difficult thing for a state like Rivers State that has received Federal Allocations amounting to over Five Hundred Billion Naira from January 2008 to June 2010. Furthermore, the IHRHL notes that some states with lesser revenue have implemented the agreement. To this end, the IHRHL supports the ongoing ASUU Strike and calls on the State Government to match its rhetoric with words and meet the demands of the Lecturers in order to save the ailing education sector. The IHRHL further urges the ASUU not to give in to threats and intimidations by the government, rather they should continue with their struggle until their demands are met.
Nkasi Wodu Esq.
Program Officer ESC Rights Unit
Institute of Human Rights and Humanitarian Law (IHRHL)
Posted by PublicInformationProjects at 08:59 1 comment: 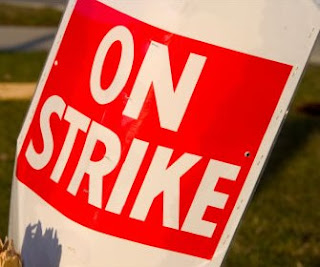 The three-day warning strike by Nigerian workers which commenced today, Wednesday 10th November, 2010 to pressure the Nigerian government to honour an earlier agreement to pay a mimimum wage of one thousand, eight hundred naira appears to have been suspended.

A citizen reporter in Abuja have just filed a report to the effect that the strike have been suspended by the leadership of the Nigeria Labour Congress(NLC) and Trade Union Congress of Nigeria,(TUC) who are jointly coordinating the action, after a second closed door meeting with the Nigerian President. No further details were provided.

chidi opara reports have not been able so far to independently confirm this Information.
Posted by PublicInformationProjects at 08:32 No comments:

Movement for the Emancipation of the Niger Delta (MEND), the main umbrella body of Nigeria’s Niger Delta region militants who rejected the amnesty granted to militants who surrendered arms and renounced violence by the government last year, have resumed hostilities after what seemed an initial ceasefire.

MEND had on October 1st 2010, during the country’s 50th Independence anniversary celebration detonated bombs in the nation’s capital city Abuja, which injured many and also claimed lives. The aftermath was a “mop up” of suspected MEND financiers and operatives by the Security Services, with some currently being prosecuted, while others are at large.

MEND reacted to this situation by taking crucial security measures. It changed the e-mail account with which it sends mails to select news media organizations and announced that in the interim, communications between the organization and the news media would be limited to announcements of impending attacks and claims of responsibilities of attacks only.

The militant group after these measures attacked the Okoro oilfield; a shallow water facility located 12 kilometers offshore Nigeria in an average water depth of 14 meters in the eastern Niger Delta, in the late hours of Sunday 7th of November 2010 and abducted some expatriate workers whom MEND said “are well and in our safe custody”.

The Okoro Oilfield is located in OML 112 block and operated by Afren with 50% interest. Its local partner Amni has 50% interest too.

The ability of the militant group to attack a facility like Okoro Oilfield, chidi opara reports learnt is causing serious concerns in top security circles which hitherto believed that MEND was a spent force. Security contacts have informed us of  “re-strategizing within the security apparatuses”.

chidi opara reports also have unconfirmed information that MEND have plans and the capacity to wage a protracted guerrilla war on Nigeria’s oil facilities. We could not confirm this information because of the inability to reach our contacts inside MEND at the time of preparing this report.

Posted by PublicInformationProjects at 07:24 No comments: