“The Global Information Technology Report 2009–2010 is a special project within the framework of the Global Competitiveness Network and the Industry Partnership Program for Information Technology and Telecommunications Industries. It is the result of a collaboration between the World Economic Forum and INSEAD”.
Click Here To Read Report
Posted by PublicInformationProjects at 07:31 No comments: 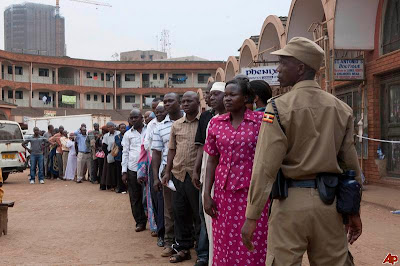 In response to an invitation from the Government of the Republic of Uganda, the Chairperson of the African Union Commission, His Excellency Jean Ping, appointed and sent an Observer Mission to Uganda to observe the Presidential and Parliamentary elections held on February 18th 2011.
The AU Observer Mission is led by Hon. Gitobu Imanyara, Member of Kenyan and Pan-African Parliaments. Other members are drawn from the Pan-African Parliament, Ambassadors / the Permanent Representatives Committee, Election Management Bodies, prominent individuals and members of Civil Society Organizations drawn from various African Countries. The Mission consists of 29 members with a support team of the African Union.
The Mission arrived in Uganda on February 14th 2011, and in accordance with the African Union Election Observation Guidelines, proceeded to meet and consult with various stakeholders of the election process, such as the Election Commission of Uganda (ECU), officials of the competing political parties, civil society, academics, media and members of other national and international election observer groups.
The AU Observer Mission is privileged to have within its composition individuals who observed the 2006 General Elections in Uganda and have noted considerable improvement in the conduct of the current elections.
Comments And Observations:
The AU Observer Mission was deployed to all regions of Uganda and observed the following:
(1)The elections were preceded by robust campaigns by candidates across the nation;
(2)The people of Uganda were enthusiastic about exercising their democratic right and indeed, there was a reasonable voter turnout;
(3)The Electoral Commission deployed human and material resources to Polling Stations in all the regions, and
(4)Voting was conducted in a generally peaceful and orderly manner compared to previous elections;
(5)Counting of votes at Polling Stations was done in full view of the voting populace and other stakeholders;
However, there were several shortcomings:
(1)Many Polling Stations did not receive voting materials on time, therefore, voting did not start at 7AM as stipulated in the Electoral Law;
(2)Many voters with voters’ cards were turned away from Polling Stations because their names could not be found on the Voters’ Register;
(3)A good number of Polling officials did not seem to have adequate training or confidence to perform their responsibilities and as a result procedures were not properly followed;
(4)The elderly, people with disabilities, expectant mothers and mothers with children were not given priority during the voting process as specified in the Electoral Law;
(5)Voters’ comprehension of the voting procedure was inadequate, especially in the rural areas;
(6)The open air setting, the marking of ballot paper in an open bowl as against an enclosure and the exposure of ballot boxes without appropriate lids and seals in some cases opened the materials to the vagaries of the weather and limited the secrecy of the voter;
(7)The deployment of the armed forces, the police and militias for security was intimidating and could have impacted negatively on the process of the election;
(8)The general dissatisfaction expressed by different stakeholders on the composition of the Electoral Commission of Uganda undermined the credibility of the process;
(9)The use of inflammatory language by politicians created unnecessary tension and fear;
(10)The national electronic and print media fell short of living up to its responsibility of providing access and level playing field to all contesting parties, and
(12)Allegations of vote buying and open material promises to electorates have undermined the integrity of the electoral process;
It is our considered opinion that there is need to review the Electoral Laws including the appointment of the Electoral Commission of Uganda with the involvement of all stakeholders.
There is need for effective and well resourced civic and voter education in future elections.
The capacities of Polling officials and political party agents could be greatly enhanced with regular and adequate training.
The Mission noted significant improvement in the conduct of the 2011 Elections compared to 2006. We congratulate the people of Uganda for a conclusive and generally peaceful election.
This election highlighted the areas of improvement for future General Elections.
Signed:
Hon. Gitobu Imanyara
Leader of Mission
Posted by PublicInformationProjects at 09:58 No comments: 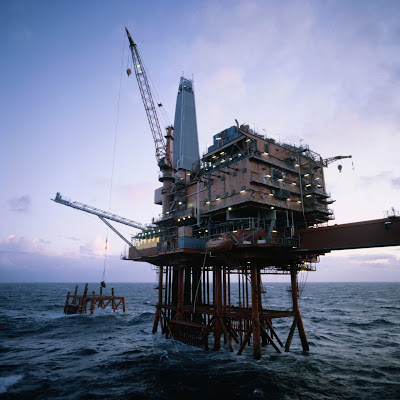 Oil prices rose slightly to near $98 a barrel Friday in Asia amid signs the crisis in Libya may have cut crude supplies less that previously estimated.
Benchmark crude for April delivery was up 36 cents at $97.64 a barrel at midday Singapore time, after falling as low as $96.39 earlier in the session, in electronic trading on the New York Mercantile Exchange. The contract fell 82 cents to settle at $97.28 on Thursday.
In London, Brent crude for April delivery gained 89 cents to $112.25 a barrel on the ICE Futures exchange.
Oil climbed as high as $103 on Thursday before the International Energy Agency said that the violent uprising in Libya has forced oil companies to idle between 500,000 and 750,000 barrels per day of production, or less than 1 percent of global daily oil consumption. That's roughly half of what Italy's Eni, Libya's largest oil producer, estimated earlier Thursday.
The Paris-based IEA also said it can make up for any lost shipments from Libya by tapping into large surpluses held by member countries, which include the U.S., the United Kingdom, France and Germany. Saudi Arabia, the biggest crude producer of the Organization of Petroleum Exporting Countries, said that it would increase production to make up for any shortfalls due to unrest in Libya, if necessary.
Oil has jumped from $84 last week amid investor concern the recent wave of unrest in the Middle East and North Africa could affect other oil-rich countries in the region.
"The fear factor in the market remains high, as the extent of contagion remains unknown," Barclays Capital said in a report. "The price correction, should the situation in the Middle East ease somewhat or in the event of OPEC production increases, is likely to be quite sharp."
Most of the eastern half of Libya has already broken away, and diplomats and ministers have abandoned Gadhafi, who has ruled the country for 41 years. He is still believed to be firmly in control only of the capital, Tripoli, some towns around it, the far desert south and parts of Libya's sparsely populated center.
On Thursday, foreign mercenaries and Libyan militiamen loyal to Gadhafi tried to roll back the uprising, attacking two cities near Tripoli in battles that killed at least 17 people. But rebels made new gains and seized a military air base.
Gadhafi said Thursday that he blamed Osama bin Laden and teenagers hopped up on hallucinogenic pills for the upheaval.
"Some form of military coup against Gadhafi seems inevitable," Capital Economics said. "Despite the bloodcurdling rhetoric, the Gadhafi regime appears to be crumbling and whoever takes over will surely want to restore business as usual as soon as possible."
In other Nymex trading, heating oil rose 1.8 cents to $2.90 a gallon and gasoline gained 1.3 cents to $2.73 a gallon. Natural gas futures were up 0.6 cent at $3.88 per 1,000 cubic feet.
Credit: Associated Press
Posted by PublicInformationProjects at 09:18 No comments:

Editorial: The Odds Against Anti-Government Protest In Nigeria

The world of politics seem to be embracing a new method of removing political leaders. The method, though tyrannical, have been hailed by the news media and by some pro-democracy activists. The method is tyranny of the masses, otherwise known as anti-government protest.

The reason for hailing this new method may be that so far, political leaders that have been ousted were despots who instead of making their countries better than they met them, rather made them poorer through  corrupt practices.

Anti-government protests have so far swept leaders off seats of power in Tunisia and Egypt. It is about to remove the Libyan leader, who have been in power since 1969. There is also reports that Cameroon, one of Nigeria's neighbours, would soon experience anti-government protest.

Since the period of the Tunisian protest, commentators have been calling for same in Nigeria. To these commentators, Nigeria is due for an anti-government protest to oust the corrupt political class.

One of the characters of protests is that lawless elements would always seize the occasion to loot. This problem is usually remedied in the course of protests. Another character of protests is that they are usually started by a group operating in a particular location before they spread to other locations with other groups joining. The third character is that protests are usually targeted at current political power holders. These characters are the odds that would work against any anti-government protest in Nigeria.

Going by the experience of Igbos, a majority ethnic nationality, whose main occupation is trading, during the civil war, the Igbo persons whose goods would be looted would see any anti-government protest as targeted at his business, in fact an indirect continuation of the civil war. If the protest starts from the moslem dominated north, the south, dominated by Christians would suspect an Islamization agenda, Christian crusade agenda would be suspected if the protest starts in the south. If for instance, the protest starts during the administration of Goodluck Jonathan, an Ijaw, the Ijaws, the fourth ethnic nationality, would suspect a plot against the Ijaw nation.

These odds, chidi opara reports believes, are serious and would be used by the corrupt Nigerian political class to scuttle any anti-government protest. In our opinion, it is better not to start, than to start and not finish or finish poorly with the attendant huge loses in human and material resources.
Posted by PublicInformationProjects at 01:49 No comments:

The ruling by an Abuja Federal High Court presided by Justice Adamu Bello on February 23rd, 2011 exempting seven Peoples Democratic Party(PDP) governors, including the governor of the President's home state, Bayelsa, from contesting the April 2011 governorship election took aback members of the President's political Think Tank. Justice Bello ruled that the office of the governor of Bayelsa state and those of six other states would not be vacant by May 29th, 2011.

Reliable information available to chidi opara reports indicates that although a member of the President's party, the President is not convinced of the suitability of the governor of his home state, Chief Timipre Sylva as a state governor. The President reportedly prefers his erstwhile Adviser on Niger Delta Affairs, Chief Timi Alaibe who is contesting the 2011 governorship election in the state on the platform of the Labour Party(LP). It is reported that the President is confident that Alaibe would go back to PDP as soon as he is sworn in as governor.

Contacts close to some of the President's strategists informed chidi opara reports that because of security reports linking governor Sylva to corrupt practices and support to violent tendencies in the Niger Delta region, amongst other vices, the President wanted to pressure the PDP national leadership to drop Sylva but backed down when his strategists advised against that, insisting that the move would create tension in the already volatile Bayelsa state and in the whole Niger Delta region. The President we learnt further was advised to empower Alaibe who is believed to still have soft spot for PDP.

"You can see the hand of the President in the kind of money we spend and the type of security around us", an Alaibe supporter boasted to a chidi opara reports network member in Yenagoa.

We have also been reliably informed that the President's political strategists have planned a meeting outside Abuja this weekend to re-strategize.
Posted by PublicInformationProjects at 09:21 No comments:

Article: Between Performance And Sycophancy; Options Before Governor Amaechi

Posted by PublicInformationProjects at 08:27 No comments: