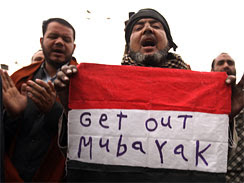 The top leadership body of Egypt's ruling party resigned Saturday, including the president's son, but the regime appeared to be digging in its heels, calculating that it can ride out street demonstrations and keep President Hosni Mubarak in office.

The ruling party leaders who resigned included the country's most powerful political figures — and its most unpopular among many Egyptians. The move may have been aimed at convincing protesters in the streets that the regime is sincere in implementing democratic reforms they demand.

But State TV, announcing the resignations, still identified head of state Mubarak as president of the ruling party in a sign he would remain in authority. And Prime Minister Ahmed Shafiq said Saturday that stability was returning to the country, appearing confident that a deal on future reforms can be reached with the multiple opposition movements to defuse protests without the 82-year-old Mubarak necessarily leaving power immediately.

Protesters have refused to end their mass rallies in downtown Tahrir Square until Mubarak quits. Tens of thousands gathered Saturday in Tahrir, waving flags and chanting a day after some 100,000 massed there in an intensified demonstration labeled "the day of departure," in hopes it would be the day Mubarak leaves.
Their unprecedented 12-day movement has entered a delicate new phase. Organizers fear that without the pressure of protesters on the street, Mubarak's regime will enact only cosmetic reforms and try to preserve its grip on power. So they are reluctant to lift their demonstrations without the concrete gain of Mubarak's ouster and a transition mechanism that guarantees a real move to democracy afterward.

Mubarak has insisted he will remain in his post until the end of his term in his autumn. In the meantime, the government has sought to draw opposition parties and the youth groups involved in the protests into immediate negotiations on constitutional reforms so presidential elections can be held in September to replace Mubarak.

Protest organizers, wary of a trap, have refused until Mubarak goes. A key question will be whether they can maintain enthusiasm and continue to rally large numbers. Some in Tahrir greeted the new concession of ruling party resignations with with scorn.

Wael Khalil, a 45-year-old activist, said it would "reinforce their (protersers') resolve and increase their confidence because it shows that they are winning, and the regime is retreating inch by inch."

Among those on the six-member party Steering Committee that stepped down was the National Democratic Party's secretary-general, Safwat el-Sharif, and the president's son Gamal Mubarak, who has long been seen as his father's intended heir as president. The turmoil has crushed those ambitions, however, with Vice President Omar Suleiman promising in the past week that Gamal will not run for president in September.
A new Steering Committee was named, headed by Hossam Badrawy, who also replaced Gamal as head of a separate policies committee. The new body largely consists of young figures, one of the new appointees, Mohammed Kamal, told The Associated Press. "It's a good change. It reflects the mood of change that is sweeping the country," he said.

The move suggested that the military figures now dominating the regime — including Vice President Omar Suleiman and Prime Minister Shafiq — judged that dumping party veterans was the price for getting enough of the opposition to accept Mubarak's continuing in power.

At a press conference aired on state TV, Shafiq suggested the government hopes to convince enough factions to enter talks that the others will be forced to join in. Asked whether the Muslim Brotherhood, for example, will enter talks, Shafiq said, "Once they find the others are negotiation, for sure they will or they will be left alone ... The level of aspirations is going down day by day."

He noted that the protesters had changed their slogan from "day of departure" to a "week of steadfastness," saying that this was "because they failed on Friday" in forcing out Mubarak. "All this leads to stability," he said.

Government officials, meanwhile, sought to depict that normalcy was returning to a capital that has been paralyzed for nearly two weeks by the crisis. State TV announced that banks and courts, closed for most of the turmoil, will reopen Sunday, the start of Egypt's work week, though daily bank withdrawals will be limited to $15,000 and the stock market will remain shut at least through Monday.

The government and military have promised not to try to clear protesters from Tahrir, and soldiers guarding the square continued to let people enter to join the growing rally.

But there were signs of tension Saturday. At one point, army tanks tried to brought out tanks to try to bulldoze away several burned out vehicles that protesters used in barricades during fighting this week with pro-regime attackers. The proteters say they want the gutted chassis in place in case of a new attack. Protesters clambered onto the vehicles and lay down in front of them to prevent soldiers from removing them, and only after heated arguments did the troops agree.

Also, there were reports for the first time of attempts by troops guarding the square's entrances to prevent those entering from bringing food for protesters, thousands of whom have camped out for days and need a constant flow of supplies.

Mohammad Radwan, 31, said soldiers harassed him as he brought in supplies of bread, cheese and lunch meat and tried to confiscate some of the food until he shouted them down. "They want to suffocate the people in Tahrir and this is the most obvious attack on them without actually attacking," he said.

Protesters vowed to hold out in the square. Elwan Abdul Rahman, a 26-year-old who arrived in Tahrir on Friday from southern Egypt dismissed the prime minister's comments. "He's laughing at the world, he's laughing at all of us," he said, pointing at the crowds and saying, "Do you think they're gonna go away tomorrow? ... People are here with their blood and their soul."

Shafiq's comments pointed to what could be the regime's strategy in the coming phase: isolate protests but let them go on in hopes they burn out from exhaustion while trying to keep the government Mubarak installed last week in place to direct the reform process. Shafiq and Vice President Omar Suleiman — both military men like Mubarak and regime stalwarts put in their posts last week — have taken the lead in trying to arrange reform negotiations.

Egypt's top ally the United States has pressed Mubarak, who has ruled for nearly three decades with an authoritarian hand, to launch a democratic transition immediately and step aside quickly. The administration has held behind-the-scenes talks with Egyptian officials on a variety of ways to do that, including a proposal that Mubarak step down now and hand power to Suleiman.

President Barack Obama stopped short of calling for Mubarak's immediate resignation, but said Friday that the Egyptian leader should think about his legacy and exit office in a way that ensures peace and democracy. "My hope is — is that he will end up making the right decision."

Friday saw the tentative contacts between the government, protest organizers and independent actors trying to convince the leadership on a graceful way out for Mubarak.

A self-declared group of Egypt's elite — called the "group of wise men" — has circulated ideas to try to break that deadlock. Among them is a proposal that Mubarak "deputize" his Vice President Suleiman with his powers and step down in everything but name, perhaps keeping the presidency title for the time being at least.
The "wise men," who are separate from the protesters on the ground, have met twice in recent days with Suleiman and Shafiq, said Amr el-Shobaki, a member of the group. Their proposals also call for the dissolving of the parliament monopolized by the ruling party and the end of emergency laws that give security forces near-unlimited powers.

"The stumbling point remains that of the president stepping down," el-Shobaki said.
The "wise men" are comprised of about a dozen prominent public figures and jurists, including former Cabinet minister and lawyer Ahmed Kamal Aboul-Magd, businessman Naguib Sawiris and political scientist academics like el-Shobaki. "We don't represent the youth on the ground. We keep in touch with them," said el-Shobaki.

Late Friday, a delegation from the protesters themselves meet with Shafiq to discuss ways out of the impasse, said Abdel-Rahman Youssef, a youth activist who participated in the meeting.

He underlined that the contacts were not negotiations. "It was a message to see how to resolve the crisis. The message is that they must recognize the legitimacy of the revolution and that president must leave one way or the other, either real or political departure," he told The Associated Press.

The protesters are looking into the proposal floated by the "wise men," said Youssef, who is part of the youth movement connected to Nobel Peace laureate and prominent reform advocate Mohamed ElBaradei.
"It could be a way out of the crisis," Youssef said. "But the problem is in the president...he is not getting it that he has become a burden on everybody, psychologically, civicly and militarily."

Israa Abdel-Fattah, a member of the April 6 group, another of the youth movements driving the demonstrations, said there is support for the wise men's proposal among protesters.
Youssef underlined that the 12-day-old protests will continue in Tahrir Square until Mubarak goes in an acceptable way.

"There is no force that can get the youth out of the square. Every means was used. Flexibility, violence, live ammunition, and even thugs, and the protesters are still steadfast," he said, referring to an assault by regime supporters on Wednesday that sparked 48 hours of heavy street fighting until protesters succeeded in driving off the attackers.

The protest organizers themselves are a mix of small movements who managed to draw broadbased support among a public disenchanted with Mubarak's rule. The majority are young secular leftists and liberals, who launched the wave of protests though an Internet campaign, but the fundamentalist Muslim Brotherhood also has built a prominent role.

Suleiman and Shafiq say they want negotiations with all the factions, promising their voices will be heard.
Protesters, however, distrust a process conducted by the current government, given the regime's overwhelming domination of the playing field, including a grip on security services and the media, a vast patronage system, a constitution that effectively enshrines its monopoly and a history of rigging elections.
ElBaradei has argued that the current leadership be replaced by a presidential council of several figures — including a military representative — to oversee the daunting process of loosening that grip, which he says will take a year.

Credit: Associated Press
Posted by PublicInformationProjects at 10:06 No comments: