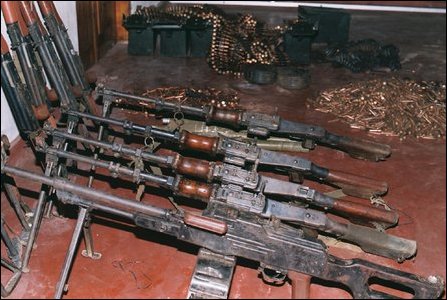 This was the highest sales figure since the think-tank, which conducts independent research on international security, armaments and disarmament, started its annual studies in 2002.

"Despite the continuing global economic recession in 2009, the total arms sales of the SIPRI Top 100 of the world's largest arms-producing companies increased by $14.8 billion from 2008," SIPRI said in a statement.
Of the firms monitored, 78 were based in the United States and western Europe, generating 92 percent of the sales.

Susan Jackson, arms industry expert at the institute, said the rate of growth in sales has accelerated steadily since 2005 when it was 2 pct.

"We didn't think the arms industry would feel an immediate impact from the financial crisis," she said, pointing to long delivery times and long-running contracts with governments.

"The overall top producers aren't going to necessarily see an impact in the next year or two," she said.

Credit: Reuters
Posted by PublicInformationProjects at 02:47 No comments:

Article: Rochas! Rochas!! Rochas!!!, How Many Times Did I Call You?(Part1)

﻿﻿ ﻿﻿By Ikenna Samuelson Iwuoha
Election is all about competition. You compete and combat your political opponents in order to emerge victorious. Politics is War without bloodshed while War is Politics with bloodshed.

But then, because of the peculiarity of politics as being played in Imo State, it is natural for one to propound an “issue based” politicking for all aspirants and candidates.

It is an acknowledged fact that the present government in Imo State led by Mr. Ikedi Ohakim has failed to meet the aspirations of Imo people. It is a notorious fact that rather than meet the aspirations of the people, the PDP led government of Ikedi Ohakim is busy looting the resources of the state shamelessly. Now, the good people of Imo State have taken a definite stand against the Ohakim led government.

This was made possible when patriotic citizens and leaders in the state came together to rescue the people of the state from the valley of under-development, mis-management and maladministration of Mr. Ikedi Ohakim.

They came together under the name of Alliance For Good Governance. This Alliance went round the state (27 LGAs) on four occasions informing and alerting the people of the State on the style and type of leadership that is in Imo State. The journey was not easy because many of our patriotic leaders were humiliated in the process. These leaders include :(1)Chief Dr. Alex Obi (2)Citizen Ikenna Samuelson Iwuoha (3) Dr. Shar OKorie (4) Dr. Ihedoro (5) Chief Standford Onyirimba (6) Hon. Ugochukwu Nzekwe (7) Hon. Onuora Olumba etc.

The major interest of this write-up is the suspicion that “Owelle” Rochas Anayo Okorocha is being sponsored by Mr. Ikedi Ohakim and the PDP with the sole “Agenda” to divide the votes of the opposition as represented by Action Congress of Nigeria(ACN). Till this very moment, Rochas has not critized or condemned the activities of Governor Ikedi Ohakim in Imo State. For the records, Rochas Okorocha is the governorship Candidate of the All Progressives Grand Alliance (APGA) in the forthcoming. His antecedents are well known to the people of Imo State in particular and Nigerians in general.

He is a well known political showman and mercenary in this country. Rochas Okorocha contested for “President” in 2003 on the platform of All Nigeria Peoples Party (ANPP). Nigerians never knew that he was sponsored by the former President, Olusegun Obasanjo to help destabilize the ANPP. He later withdrew from the Presidential race and abandoned all the people who followed him to the party, President Obasanjo later appointed him as Special Adviser on Inter-Party affairs to compensate him for a “job” well done. Ever since, ANPP has remained comatose and its members more confused than ever.

Today he is being sponsored by Ikedi Ohakim and the PDP in APGA with the sole purpose of dividing the over 90% votes of the people of Imo State who are battle ready to vote Ikedi Ohakim out. To make matters worse, Rochas and his party (APGA) have adopted the PDP presidential candidate, Dr. Goodluck Jonathan as their Presidential Candidate. What a way to assault democracy!!!! As a man who never completes a political project, it is expected that Rochas will abandon those who followed him to APGA once he completes his assignment. The question now is, will APGA ever remain the same once Rochas abandons it? I doubt.

Political parties have manifestos with which they use to project their parties and their candidates. APGA as a political party has manifestos. APGA is controlling only one state in Nigeria,(Anambra State). It should be noted that there is no free Education in Anambra State. Why then should Rochas Okorocha be promising Imo people free education up to University

Again, when Ikedi Ohakim suddenly came on board as the governor of Imo State in May 2007, he established a N50 billion naira Imo State Education Endowment Trust Fund and made Chief Rochas Okorocha the chairman of the trust fund. Till this moment, nothing has been heard of that trust fund despite the fact that billions of naira was raised, sourced and brought into the trust fund. The question now is what has Rochas Okorocha, the renowned “Philanthropist” and apostle of “free” education in Nigeria done with the billions of naira entrusted in his custody?

Did he share the funds with Ikedi Ohakim? Did Rochas Okorocha resign as Chairman of the Trust fund because Ohakim outsmarted him in the sharing formula? How many international agencies donated millions of dollars to the trust fund? His claim to offer free education in his private schools, are they real? Why did the Abia state government in January 2011 expose Rochas Okorocha as a man not sincere and genuine in his free education Crusade?

It is therefore logical for one to conclude that Rochas Okorocha is not real and sincere in his gubernatorial project. He is on contract to destabilize the ACN which is the ultimate opposition party in Imo State. Otherwise how come Rochas is in APGA but very busy campaigning and praising the Ohakim led PDP government? How come Rochas is in APGA running for a governorship election but he attended the PDP presidential rally held in Enugu State with Ikedi Ohakim two weeks ago? How come Rochas is in APGA but held a closed door meeting with Ikedi Ohakim and PDP Presidential Candidate in Abuja three weeks ago? Why is the Ohakim-PDP led Government in Imo State removing posters of ACN candidates, while allowing that of APGA candidates to stay?

It is a fact that Ikedi Ohakim and Owelle Rochas Okorocha have been seen together “politically smooching” each other, holding hands, embracing and hobnobbing like twins. Also Owelle Rochas Okorocha have been seen with Mr. Emma Ohakim (Ikedi’s younger brother) severally in the past few weeks smiling, embracing and discussing only God knows what. Opposition leader indeed!! Governorship Candidate indeed!!!

Now let me look at the issue of zoning of political offices in Imo State. Honestly, personally, I do not support zoning. I say this because zoning breeds mediocrity. But my view point can not be imposed on Imo Citizens. Since it has been agreed that the three zones in Imo State should rotationally produce the governor of the state on a two-term basis, it becomes ethically wrong for an Orlu son to come out to contest for governorship at this point in time. Orlu zone has produced the governor between 1999 and 2007.

Okigwe zone is on the saddle and must be allowed to complete their tenure after which Owerri zone will take over in 2015. It should be noted that zoning breeds mediocrity and Mr. Ikedi Ohakim is an epitome of mediocrity. The people of Okigwe zone has apologized to the good people of Imo State, for the mistake they made in bringing out a visionless and missionless Ikedi Ohakim in their first term of four years. They have promised that such mistake would not be made again in their remaining term of four years. Hence they have abandoned Ikedi Ohakim and collectively brought out a distinguished son of Okigwe zone from Isi-Ebu autonomous Community to complete the remaining four years to rebuild and restore what Ohakim, who is from Okohia autonomous community has destroyed in the state.

With this understanding signed, sealed and delivered, it simply means that Owerri zone will take its turn from 2015 - 2023. Therefore for Rochas Okorocha to openly challenge the governorship zoning formula in Imo State is an affront that must not be allowed to stand. I therefore call on all Imo Citizens in general and the people of Owerri zone in particular to condemn this treacherous act of Rochas Okorocha. He is a well known confusionist who likes to reap where he has not sown.

He should be seen like a thief who has come to steal the fruit of our labours after we have collectively sensitized the people of the state on the mis-rule of Ohakim. Let us collectively remove the hand of the monkey in the pot of soup before it becomes a human hand. Let us tell Rochas Okorocha through pro-active politicking that his political showmanship in Imo State has come to an end. Rochas! Rochas!! Rochas!!!...., How many times have I called you? I rest my pen.

Posted by PublicInformationProjects at 02:15 No comments: