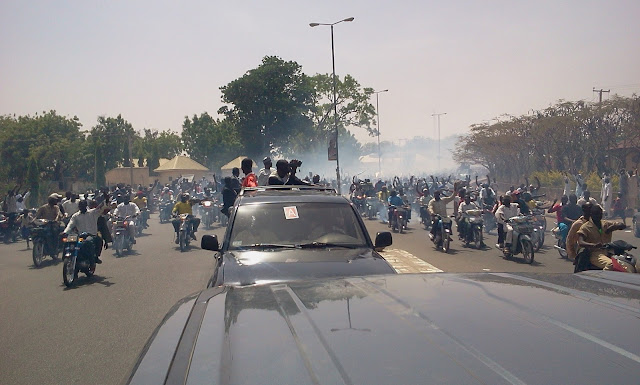 Posted by PublicInformationProjects at 09:58 No comments:

The decision of the Goodluck Jonathan Presidency to grant pardon to the convicted Peoples' Democratic Party(PDP) Chieftain, Rtd. Commodore Bode George have placed the faction of the former President, Rtd. General Olusegun Obasanjo and the Bode George faction at loggerhead.

chidi opara rports gathered authoritatively that a day before George left the Kirikiri prison, his abode since 2009, he played host to a two-man delegation from the President who conveyed to him the readiness of President Jonathan to grant him pardon if he would use his influence in the South West to help secure the zone for the President in the oncoming presidential election.

A Prison official who monitored the meeting informed us that George was very excited at the development and readily promised to do his best, "even beyond 2011".

Problem, according to a PDP South West insider, started when the Obasanjo faction got wind of the development last week. We gathered that Obasanjo was very saddened when he learnt of the development. He was reportedly more saddened by the fact that neither George nor President Jonathan informed him before and after the meeting. The Obasanjo group, chidi opara reports leant further have vowed to fraustrate any attempts to rehabilitate Bode George. The Bode George group have however, vowed to to resist what it called futher attempts to deny it political patronages.

Rtd. Commodore Bode George was a former military governor of Ondo state, a state in South Western Nigeria and a former PDP national Vice-president(South-West). He was known to have considerably large followership in the party in the zone prior to his being sentenced to a two-year-prison term for fraud committed when he was the Chairman of Board of Directors of the Nigerian Ports Authority(NPA).

Presidency contacts have however confirmed to chidi opara reports that the decision would be dependent on the outcome of the case at the Supreme Court in which George and his co-convicts are asking the apex court to review the verdict of the Ikeja High Court which sent them to jail. Meanwhile, network members in Lagos, Ibadan and Akure report that aggrieved PDP stalwarts in the South West are presently queuing behind Bode George.

It would be noted that Olusegun Obasanjo last week described the welcome reception organized for George by his followers in which he was an attendee as a celebration of criminality, claiming that he was tricked into attending.
Posted by PublicInformationProjects at 05:06 No comments: