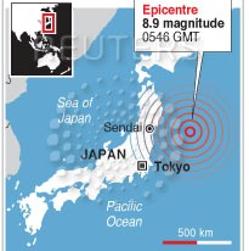 Japan warned of a possible radiation leak on Saturday as authorities battled to contain rising pressure at two nuclear plants damaged by a massive earthquake, but said thousands of residents in the area had already been moved out of harm's way.

Pressure was building in reactors of two plants at Tokyo Electric Power Co 's Fukushima facility, located some 240 km (150 miles) north of Tokyo. At one of them, the Daiichi plant, pressure was set to released soon , which could result in a radiation leak, officials said.

"It's possible that radioactive material in the reactor vessel could leak outside but the amount is expected to be small, and the wind blowing towards the sea will be considered," Chief Cabinet Secretary Yukio Edano told a news conference.

A trade ministry official said that T EPCO was also considering releasing pressure at its other plant, the Daini plant.TEPCO said it had lost ability to control pressure in some of the reactors at the Daini plant as it had with the Daiichi plant. Pressure was stable inside the reactors of the Daini plant but rising in the containment vessels, a spokesman said.

Some 3,000 people who live within a 3 km radius of the plant had been evacuated, Kyodo news agency said.

Pressure at one Daiichi reactor may have risen to 2.1 times the designed capacity, the trade ministry said. Media also said the radiation level was rising in the turbine building.

Preparatory work for the releasing of the pressure was expected to take time , Kyodo reported. Radiation levels outside the main gate of the plant were eight times normal levels .

The cooling problems at the Japanese plant raised fears of a repeat of 1979's Three Mile Island accident, the most serious in the history of the U.S. nuclear power industry. However, experts said the situation was, so far, less serious.

Equipment malfunctions, design problems and human error led to a partial meltdown of the reactor core at the Three Mile Island plant, but only minute amounts of dangerous radioactive gases were released.
"The situation is still several stages away from Three Mile Island when the reactor container ceased to function as it should," said Tomoko Murakami, leader of the nuclear energy group at Japan's Institute of Energy Economics.

Japan informed the International Atomic Energy Agency (IAEA) that the quake and tsunami cut the supply of off-site power to the plant and diesel generators intended to provide back-up electricity to the cooling system.

The Union of Concerned Scientists, a U.S.-based nonprofit organization, said this power failure resulted in one of the most serious conditions that can affect a nuclear plant -- a station blackout -- during which off-site power and on-site emergency alternating current (AC) power is lost.

Nuclear plants generally need AC power to operate the motors, valves and instruments that control the systems that provide cooling water to the radioactive core. If all AC power is lost, the options to cool the core are limited.

If the core overheats, then the fuel would become damaged and a molten mass could melt through the reactor vessel, releasing a large amount of radioactivity into the containment building surrounding the vessel, the UCS said.

It added that it was not clear if the quake had undermined the containment building to contain pressure from any meltdown and allow radioactivity to leak out.

Power supply systems that would provide emergency electricity for the plant were being put in place, the World Nuclear Association said, with a source in the organization saying "the situation is improving".
The reactors shut down due to the earthquake account for 18 percent of Japan's nuclear power generating capacity.

Nuclear power produces about 30 percent of the country's electricity. Many reactors are located in earthquake-prone zones such as Fukushima and Fukui on the coast.
The IAEA estimates that around 20 percent of nuclear reactors around the world are currently operating in areas of significant seismic activity.

It said the sector began putting more emphasis on external hazards after an earthquake hit TEPCO's Kashiwazaki-Kariwa plant in July 2007, until then the largest to ever affect a nuclear facility.
When the earthquake hit the Kashiwazaki-Kariwa nuclear power plant, four reactors shut down automatically. Water containing radioactive material was released into the sea, but without an adverse effect on human health or the environment, it said.

TEPCO had been operating three out of six reactors at the Fukushima Daiichi nuclear plant at the time of the quake, all of which shut down.
A spokesman said that there were no concerns of a leak for the remaining three reactors at the plant, which had been shut for planned maintenance.