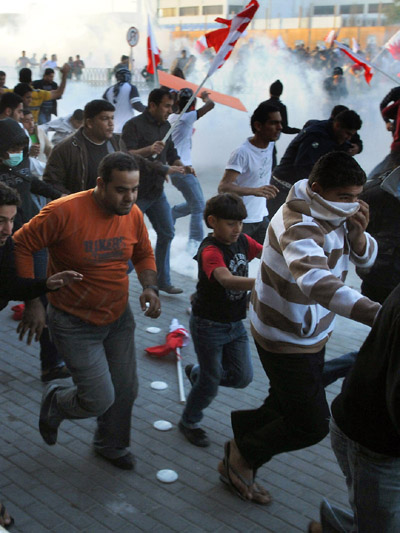 Hundreds of young Shi'ite men marched down a commercial street in the Saudi city of Qatif, near the heart of the kingdom's oil industry, pounding their fists in anger over their country's military intervention in Bahrain.

"With our blood and soul we sacrifice for you, Bahrain," they chanted as they walked, according to videos of a recent protest posted on the internet. Some wore scarves to conceal their faces. Others waved Bahraini flags.

"People are boiling," one Shi'ite activist in Qatif told Reuters by phone, asking not to be named for fear of arrest. "People are talking about strikes, demonstration and prayer to help the Bahrainis."

The protests were in response to Saudi Arabia, the world's top oil exporter and most powerful Gulf Arab state, sending troops to Bahrain last week to help quell weeks of protests by majority Shi'ites in the Sunni-led monarchy. Bahrain's opposition called it a declaration of war.

Riyadh, facing Shi'ite protests of its own, fears a sustained revolt in neighbouring Bahrain could embolden its own Shi'ite minority, which has long grumbled about sectarian discrimination, charges Riyadh denies.

The military intervention, however, appears to have only deepened Shi'ite resentment in the kingdom, where between 10 and 15 percent of the 18 million Saudi nationals are Shi'ites.

Leading Saudi Shi'ite cleric Sheikh Hassan al-Saffar has called for Gulf leaders to find a political solution.
Saudi Shi'ites, inspired by pro-democracy protests across the Arab world that toppled the leaders of Egypt and Tunisia, have held sporadic protests in a handful of eastern towns over the past three weeks.

"Before the start of revolution in Tunis, people felt rather incapable of making a difference," activist Tawfiq al-Seif said. "They (now) feel they can make a difference."

But Saudi Arabia's Bahrain intervention, as part of a Gulf force, has raised the stakes even as a broader protest movement has not taken hold. The scenes at recent protests were in stark contrast to previous demonstrations focused on narrow demands like securing freedom for long-held detainees.

In those early protests, women in black abaya cloaks held out roses and men waved the Saudi national flag, videos showed. "Freedom for prisoners," one sign read. "Justice is our demand," said another.

Rifts:
By day, Qatif is a place of contrasts. Carefully planted white flowers flutter in road medians and luxury villas with decorative stone walls contrast with apartment blocks with exposed cinderblock or faded and peeling paint.

Pictures of King Abdullah abound in the town, the outskirts of which are dotted with date palms. Graffiti, which a government escort says was likely words of romance, has been scribbled over to make it illegible.

"Everything is fine. We are good," said one man, asked about the situation in Qatif on a main street where protests have taken place, speaking as a government escort looked on.

But activists say there is significant resentment, stemming from the feelings of inequality by Shi'ites who want better infrastructure in their towns, improved access to jobs and to be treated as equals in the Sunni-dominated kingdom.

Activists say there have been some attempts at dialogue in recent weeks, and several prominent Shi'ites said they hoped that their areas would be among the beneficiaries of handouts by King Abdullah.

The Saudi King offered $93 billion in handouts on Friday that included funds for housing and boosted his security and religious police forces, after last month announcing an economic package worth $37 billion to ease social tensions.

But there was no word on a cabinet change that some Shi'ite activists hoped would include new and younger ministers more amenable to addressing their political demands.

Rifts were clearly present, however, between Shi'ite youth who think a solution will come from the street and those in a more conservative older generation who would like to continue a slower path to reform through dialogue.

Protesters complain that authorities have sometimes clamped down harshly on them, including firing into the air to disperse protests in at least one instance and arresting demonstrators. The other side says the youth are being unreasonably impatient.

"People, especially young people, do not value security and stability. These are worth billions," said Adeeb Alkhunaizi, a petroleum engineer from Qatif who works for the government.

A Shi'ite judge in the town who has urged an end to street protests, Sheikh Wajeeh al-Awjami, said youth had broken through the gate of his second home and set it ablaze, after earlier sending him text messages bemoaning his opposition to protests.

At his home, an estate with a fountain, indoor swimming pool and mulberry trees, workers cleared away charred rubble from the living quarters where the roof had collapsed.

"When King Abdullah returned from the outside ... he promised us he will give many benefits," he said. "He said we will give you what you want. The young people, they don't want to wait."

Credit: Reuters
Posted by PublicInformationProjects at 09:54 No comments: