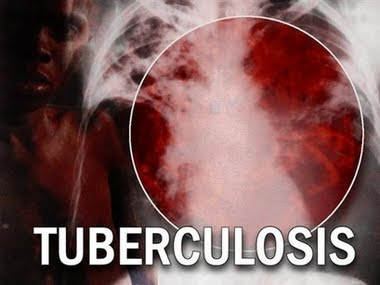 Scientists have identified a key enzyme responsible for destroying lung tissue in tuberculosis (TB) and say the finding could lead swiftly to new treatments for the highly infectious disease.
In a study in the Journal of Clinical Investigation published on Monday, researchers said a drug already shown to be safe in humans and partially developed by Roche known as RO323555, was effective at suppressing the enzyme's activity driven by TB infection in human cells.
The findings suggest this and similar so-called MMP inhibitor drugs might prevent lung damage in TB patients and help limit the spread of the disease, they said.
TB is a worldwide pandemic that kills around 1.7 million people a year and is caused by the bacterium Mycobacterium tuberculosis. The infection destroys patients' lung tissue, causing them to cough up the bacteria, which then spread through the air and can be inhaled by others.
Experts say the worldwide number of new cases -- more than 9 million a year -- is higher than at any other time in history.
TB patients need months of antibiotic treatment, but drug-resistant strains are becoming increasingly common and the World Health Organisation has warned that these infections could affect more than 2 million people by 2015.
"Standard TB treatment has remained unchanged for 35 years and no current treatments prevent the lung destruction that TB causes," said Paul Elkington from the Infectious Diseases and Immunity department at Imperial College London (ICL), who led the study. "These findings suggest that drugs available now might be able to reduce deaths from TB."
Strong Evidence:
In their study, the researchers found that in TB patients have increased levels of an enzyme called MMP-1 in their lungs. When they infected human immune cells with TB in the lab, they found the cells greatly increased production of this enzyme.
"Until now, we haven't had a convincing explanation of how lung destruction is caused by TB," said ICL's Jon Friedland, who also worked on the study.
"We hypothesised that protease enzymes must be involved, since nothing else could break down the strong collagen fibres that make up the scaffold of the lung. The results of this study provide strong evidence to support that idea."
Many MMP inhibitor drugs were developed in the 1990s because they showed initial promise for treating cancer, but development of the medicines stalled after trials suggested their prospects in cancer were not as good as had been originally hoped.
Elkington said his team now hoped to collaborate with drug companies to see if MMP inhibitors can prevent lung destruction in TB patients. In a telephone interview with Reuters, he said he had contacted the Swisss drugmaker Roche about a possible collaboration and was awaiting a reply.
He said that "with a fair wind", clinical trials using RO323555 in TB patients could start in about a year's time.
The team is also conducting TB studies in the lab using another drug, doxycycline -- an antibiotic often used as a treatment for infections and which also inhibits MMP.
Doxycycline was originally developed by Pfizer in the 1960s and is now widely available as a cheap generic, suggesting that if it shows promise against TB it could offer hope to poorer countries in sub-Saharan Africa and the Indian subcontinent, where TB is relatively common.
Credit: Reuters
Posted by PublicInformationProjects at 11:00 No comments:

Posted by PublicInformationProjects at 03:05 No comments: