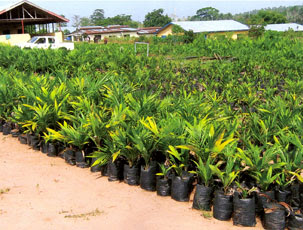 As a patriotic citizen of Imo State and who desires progress and development for the state, I deem it necessary to write you this open letter. The people of Imo State wholeheartedly accepted Your Excellency as our Governor; hence they all trooped out en-masse to witness your historic inauguration on the 29th of May 2011. Expectations are so high that you cannot afford to fail us. On the 6th of June 2011, Your Excellency addressed the good people of Imo State and you showed us your Socio-economic and political direction. I must say that based on the present situation in Imo State, your maiden address to us is seen as a tonic and soothing balm that would bring back the state to its original glory. We applaud your address to us.  But we seem not to totally agree with the dissolution by executive fiat of some of the management committees of Imo State government owned corporations. One of them is the famous Adapalm (Nig)Limited, located at OHAJI/EGBEMA L.G.A.

Although I do not wish to challenge your wisdom and criteria for taking this dissolution decision, I would like to take you back to the brief history of Adapalm, how it started, how it was mis-managed by the two immediate past administrations and finally how the last interim management committee came on a rescue Mission and salvaged the ailing Company.

Adapalm was registered in 1975 as a limited liability company and has been under various General Managers. The high rate of management turnover in Adapalm has not actually yielded much dividends to its corporate height, rather it only provided a platform that tended to legitimize the unhealthy propensity to loot and mis-manage by various interest groups. It is a notorious fact that by October 2008, the Company was saddled with arrears of 10 months salaries amounting to about N103 million. By the end of January 2010, an additional six months arrears of salaries has mopped up thereby increasing the debt figure to about N168 million. Due to criticisms and exposures of mis-management of leadership and devaluation of leadership in Adapalm by social critics and crusaders in the state, a three man  Interim Management Committee was constituted on the 15th of  February 2010 to revive the ailing company from its operational epilepsy and coma.
The three man committee includes the following:
(1)Deacon Kerian Onwuzuruike (Chairman)
(2)Chief Luke Chukwu (member)
(3) Chief Clifford Dike (member). However, Chief Luke Chukwu later resigned and went into partisan politics. He is today an elected  member of the Imo State House of Assembly representing Ohaji/Egbema State Constituency. At this point Your Excellency I wish to open your mind for you to see how Adapalm was before 15th of February 2010 when the present Interim Management Committee was inaugurated. The Mills – Adapalm”s two mills at Umuogu and Ohaji were practically grounded and out of Production for 18 months. At Umuogu Mills, the two Boilers were in bad shape. Its presses were worn out and grossly inefficient. Its clarification, steam turbines, tractors, forklifts and water supply equipment etc were all bad. Also at Ohaji mill, it was the same story. From available records and reports, the Ohaji mill was shut down in August 2009 before the advent of the Interim Management Committee in February 2010. The Planntation – Adapalm has two oil palm plantations namely, the Ohaji plantation and Umogu plantation. The Ohaji plantation has been given its pride of place ever since the year 2005. Thus as at February 15 2010, the Ohaji plantation has no motorable access roads. Its palms were not pruned and about 65% of it was “colonized” by thick forest. There was zero replanting activity to sustain the plantation future and fortunes. At Umuogu Plantation, the Story was the same.

Work, Services And Equipments:
As at February 2010 Adapalm had 29 vehicles consisting of light duty, heavy duty and earth moving equipments/vehicles. Out of this number 22 were bad while 7 are good. The building section had only I shovel and 1 head pan. There were no working tools etc. Similarly only 6 out of 14 Company Computers were in working condition while again only 4 out of 9 Adapalm printers were functional. Finance – At the inception of the Interim Management Committee on the 15th February 2010, Adapalm had only the sum of N2,950.00k to hand over as cash at hand to the Interim Management Committee. All bank balances were also sadly in red.
Administration And Security: The Staff strength of Adapalm as at December 2009 stood at 792 workers. Out of this number 85 were of Senior category, 666 were of junior category while 41 were casual workers. However as at February 2010 over 35% of these workers withdrew their services due to deprived work conditions. The 154 Security workers at Adapalm for instance had only about 36 and this led to increased insecurity and brazen looting of the company properties. Stealing and robbery became a daily affair. Your Excellency I have gone this memory lane so that you will appreciate the efficiency of my coming argument that the Interim Management Committee headed by Deacon Kerian Onwuzuruike is indeed a rescue team that Adapalm requires for now.

Within the short period of the Interim Management Committee at Adapalm between 15th of February 2010 and 6th June 2011 when your Excellency disbanded it, the following can be said to be their performance and achievements. And these achievements are subjects to verifications.

Achievements And Performance Of The Interim Management Committee:
The present Interim Management Committee has within the period under review recorded the following feats: (1)Restored harmonized work relationship amongst staff and Management for improved progress. Maintained regular payment of workers wages, salaries, and other emoluments. (2)Restoration of lost work ethics for a disciplined workforce. Regular provision of drugs/medical materials to the industrial clinic for improved workers’ health care delivery (3)Completed the replanting of 50 hectares in the felled field of the 1975 plantation, using about 6750 oil palm seedlings of tenera specie. (4)Fully developed 6000 sucker pineapple orchard with a target of 20,000 suckers to diversify the income base of Adapalm. (5) Improved the Community Relation status between Adapalm and its host Communities. (6)  Completed the rehabilitation of 20 KM and 22KM of access roads in the Ohaji Plantation in the first and second phases, respectively of the maintenance efforts. (7) Completed the slashing of about 1150 hectares of the bushy area of the Ohaji Plantation using a roller and tractor refurbished by the Interim Management Committee. (8) Refurbished the Ohaji Mill’s Pail Loader (9) Refurbished the Ohaji Mill forklift. (10) Reorganized the harvesting technique in the Ohaji Plantation for improved fruits output.  (11)Completed the refurbishment of a Tipper Truck to aid fruits evacuation in the Plantation     (12)Completed the refurbishment of a High Jack Truck to aid the operations of the Company. (12)    (13)Reinvigorated environmental cleanliness of the Ohaji Nucleus Estate to recover its lost ecstatic beauty. (14) Reorganized the security of the Company to involve the use of contract outfit, Joint patrol operations and Community security arrangement. (15)Commenced the reactivation of the Ohaji Mill. Over 80% of the job has been completed, while the Mill is billed to start full operation by the first week of June 2010.(16)Establishment  of a 10,000 hybrid oil palm nursery seedlings for continuation of replanting programme in the Ohaji Plantation. (17)Established a viable commercial vegetable garden to diversify Company revenue. (18)Procurement of a brand new Nissan Patrol Jeep ,fully equipped with
radio communication gadgets for the plantation and estate security. (19)Effective policing of the Plantation resulting to the arrest of over 66 persons, recovery of 44 motorcycles, 1 bicycle, 1 wheelbarrow, 6 Malaysian knives (as exhibits) and over 20 tons of fruits from thieves. (20)Settled out of Court an undelivered produce suit against Adapalm by a Customer involving about N3m. (21)Renovated the Board Room and re-commenced its use for Management and other meetings in the Company  Resolution by out-of-court a land entitlement suits against Adapalm involving N900M claims.(22)Settled out of court a dud cheque suit by two Contractors against Adapalm involving about N6M.(23)Restored registration as a precondition for doing business with Adapalm. Almost N1.6M has been generated so far by the registration of business names. (24)Restored sanity in the services and sales of Adapalm produce by insisting on the policy of cash-for-product and first-in-first-out arrangement.(25)Reduced the Company’s produce debt by N42m by the end of April 2011. Accrued produce debts of year 2002 were serviced by the Interim Management Committee. (26)Commenced payment to some contractors who were at the verge of instituting legal suits against Adapalm over unpaid bills. (27)Recruited about 120 fresh workers of different cadres to increase productivity and efficiency in the business of Adapalm.(28)Approved the increment of workers’ salary by 20% to induce higher performance. The last salary increment was done in 2001.(29)Approved the implementation of a general promotion for all the workers, the last of which was done in 2005.(30)Set up a formal system of loose fruits were hitherto left in the hands of thieves and the Company was loosing much revenue as a result.(31)Mobilized work for total recovery of the Adapalm Plantation from thick forest as most parts of the Plantation have not been cleared of bush for upward of 15years. (32)Installation of a modern  communication gadget with a standby generator for its base operations. (33) Defrayed all outstanding administrative charges owed to MOPOL 18 Command to facilitate effective deployment of the Police. (34)Commenced the reactivation of the Umuogu Mill. Given sufficient resources, the Mill will resume full production in July 2011.

Your Excellency, a good wine needs no bush. Conversely it is my view that the disbanded Interim Management Committee (IMC) led by Deacon Kerian Onwuzuruike is recalled to consolidate on the reforms and rescue mission which they started  at Adapalm. I also plead with you to visit Adapalm and see things for your self. You can also ask questions from Junior staff. The truth remains that Adapalm was on the verge of collapse, infact it collapsed and the Staff were becoming unspeakably despondent, “unmotivated” and dispirited prior to the advent of the recently disbanded interim Management  Committee. Your Excellency, I plead with you to listen to me. A stitch in time saves nine.

Thanks and God bless.
Yours truly,