Article: Bicycling Is The Best Intra City Transit We All Ignore 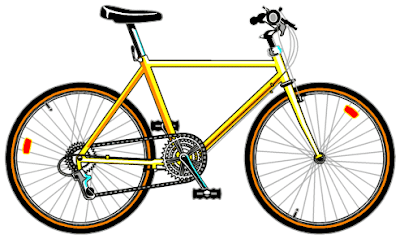 “If I can bicycle, I bicycle” -  David Attenborough
“The city needs a car like a fish needs a bicycle “ - Dean Kamen
Faced with urban traffic congestion and air pollution, some major towns and cities around the world are considering bicycling as a more cost-effective means to expand transit use and reduce automobile dependence.
Bicycles are the fastest growing and predominant mode of access to express public transportation services in many Western communities and some parts of Asia.
Provision of supporting infrastructures like secure bicycle storage at rail and bus stations, development of bicycle-friendly street networks, and the creation of a climate of community opinion supportive of bicycling are all important factors behind the success of bike-and-ride systems in these countries.
Invented in 1818 by the German Baron, Karl von Drais, the same man who invented the earliest typewriter with a keyboard, bicycle is one of the oldest means of human transportation in modern era.
Naturally, a bicycle is an inexpensive, fast, healthy and environmentally friendly mode of transport. It obviously liberates the owner from oil consumption and frees the environment from the resulting pollution. It’s at least three times as energy efficient as walking and at least four times as fast.
With over one billion of it worldwide, twice as many as automobiles, it is the number one vehicle in the globe. It is also the principal means of transportation in many developing countries.
Until recently, bicycles have been a staple of everyday life in most of the Asian countries. They are the most frequently used method of transport for commuting to work, school, shopping, and life in general.
Apart from transportation, bicycle is also a popular form of recreation, and have been adapted for such uses as children's toys, adult fitness, military and police applications, racing, postal and courier services.
As nations become wealthier, their use of bicycles declined due to the increasing affordability of cars and motorcycles but recently, several major cities around the world are encouraging people to take up the two wheels by adopting cycling as an integral part of the planned transportation system.
This new trend complements a city's public transport system and offer an alternative to motorized traffic to help reduce congestion and pollution. Cycling has become very popular in Europe, especially in The Netherlands and parts of Germany and Denmark and it is increasingly becoming very popular in some other States.
Before the oil boom of the 70s bicycling was part of our urban transport system and this vanished with the increased family income and purchasing power traceable to the boom. Many families easily upgraded to motorcycles and automobiles.
It is almost a taboo to ride a bicycle in a place like Lagos, where the latest brands of cars compete for space on the busy highways. The use of bicycles in the countryside contrasts sharply with what happens in the cities. In the countryside especially the Southeastern Nigeria, the bicycle is still a part of life as it has been so for decades. People still go to farms, market and streams on bicycles.
With the consideration that most of the movements in the cities are for considerably short distances of less than 5km and the trouble of unending traffic in Nigerian major cities especially Lagos, cycling offers a viable alternative means of human transportation if carefully planned and effectively run. The return of bicycles to Nigerian roads would help bring a lasting solution to the fuel scarcity and traffic jam in the country.
In 2001, without proper planning, the then Transport Minister, Chief Ojo Maduekwe attempted to introduce cycling in Nigerian major cities but the campaign was botched due to concerns over the safety of the Nigerian roads for bicycle riding and the recklessness of our drivers. Since then, the successive governments have not looked into its viability.
As Madueke tried to promote cycling without the necessary infrastructure, in June 2001, he was even hit by a bus and fell into a ditch while cycling to a Cabinet meeting. Even after the accident, he maintained that Nigerians should embrace cycling as a partial solution to growing gridlock that was crippling Nigeria’s economy and still strongly emphasized that bicycle culture, if encouraged is not only economically good for rural and urban dwellers, but also a means of keeping the body healthy.
Without the provision of dedicated bike lanes on the busy roads in towns and cities, cycling portends great danger and risk of accident.
(Oteniya can be reached on: oteniyark@hotmail.com +2348166870008 (SMS Only))
Posted by PublicInformationProjects at 02:17 No comments: