Article: Bicycling Is A Solution To The Perennial Traffic Problem In Lagos 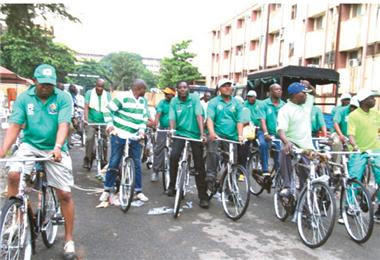 By Rufus Kayode Oteniya
Lagos, with an estimated metropolitan area population of over 15m is in no doubt having more than its fair share of traffic problems. Most residents often rate traffic as their second biggest worry after security.
People living in Lagos spend a good number of their productive and waking hours in the endless ‘go-slow’ as they move from one part of the city to another in carrying out their daily activities and on a very bad day, one can spend an incredible time in a city ‘hold up’ most especially whenever there is a heavy rain.
This is already telling on the family lives and the lifestyles of many residents. It also has an enormous cost on the economy of this city that hosts about 10% of the national population.
Some parents hardly have quality time to spend with their children again except on weekends and they have been forced, in some instances to permanently transfer the role of training their children to their relatives and housemaids which in effect is having negative impacts on the upbringing of the children.
Some Lagosians who live on the far outskirts and work in places like Victoria Island and Lekki  peninsula are forced to leave home as early as 5am and are unlikely to get back home until very late in the evening only to go out that early again the next morning.
This traffic problem also makes it almost impossible for businessmen to keep appointments or carry out business activities in different parts of the cities on the same day.
Commercial drivers also must have to factor this into their charges knowing full well that they may be able to make only a few daily trips with their buses and taxis and this is contributing to the high cost of transportation within the city.
Bicycle as a means of transport in Lagos: Walking and bicycling are two means of urban transportation whose benefits to the health of individual and the environment cannot be over emphasized. Most movements in the cities are reachable by bicycle since they are within a 5km range.
With a proper planning by the state government and provision of the necessary facilities, bicycle can be a very viable part of the solution to this perennial traffic congestion. It is not only inexpensive to acquire and operate, it also offer a fast, healthy and environmentally friendly mode of transportation to complement the existing modes of transport.
As there are plans by the government of the state to make Lagos a tourist hub and complete mega city with its attending amenities, it is necessary to incorporate bicycling into the transport plan as it is now trendy in many major cities worldwide.
The government must put a system in place that actually include cycling in the mass transit strategy and encourage people to take it up not only as a convenient but also a safe option. This system must guarantee the safety of the cyclists by educating and ensuring that road safety rules are abided and separate bicycle lanes are provided on the major roads. Without these, there is a conspicuous danger of being hit by the city’s reckless drivers. Such was a bitter experience Chief Ojo Maduekwe would never forget! In 2001, as the then Transport Minister under President Olusegun Obasanjo and while trying to promote cycling, he was hit by a bus and fell into a ditch.
The government must also lead a campign to popularise the use of bicycles. This must include a national reorientation towards a life of simplicity. Up till now, it is almost a taboo to ride a bicycle in Lagos where the latest brands of cars compete for space on the city roads. The people need to know that riding bicycle is not synonymous to hopelessness and poverty for an adult.
The worth of a man is not always in the size of his car and little wonder that in the US where only 8% of households do not own a car, over 75% of the families in Manhattan which is one of the wealthiest counties in the United States are without one. Also Denmark and the Netherlands are among the wealthiest nations in the world yet, bicycles, not cars, are their primary mode of transportation.
Provision of protected cycle tracks and dedicated bicycle and pedestrian lanes: A cycle track is a simple painted line demarcating a dedicated lane on the street from the main road. It allows bicycles, like motorcycles, to be treated like any other car on the road while a dedicated bicycle and pedestrian lane is a protected bicycle lane completely separated from the motor road.
As a developing city, Lagos requires the government to build new road and continually rehabilitate the old ones. The government of Lagos should make effort to make the provision of dedicated and separate bike and pedestrian lanes on the major roads as a standard as it is now obtainable some modern cities around the world. The local and state governments must also make their streets to be bicycle friendly.
As the state is currently rehabilitating Lagos-Badagry expressway and also building a light rail system, it is necessary to construct dedicated bicycle and pedestrian lanes or tracks on the roads linking all the main stations and equip them with secure bicycle parking.
The government should also construct such lanes or tracks to link all the major BRT bus stops and provide secure bicycle parking as well.
Luckily for Lagos, most of the roads in the city are in bad shape already, it is easier to incorporate the provision for bicycle lanes and tracks into their construction or rehabilitation than tearing down the good roads in order to make provision for cyclists.
I hope the state government will weigh this option and start some pilot projects testing it in some parts of Lagos.
Posted by PublicInformationProjects at 01:29 No comments: