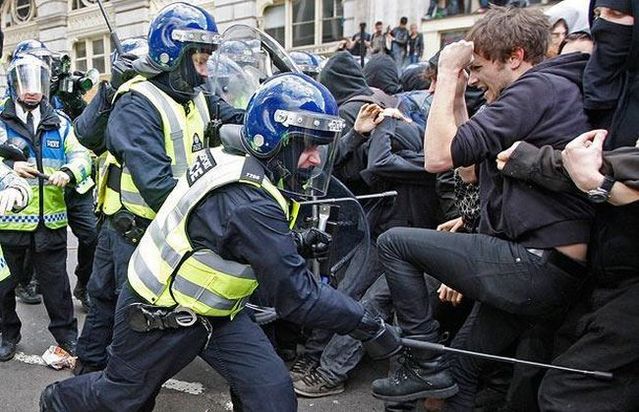 Credit: Reuters
Riots across London this week could not have come at a worse time for a country preparing to welcome millions of visitors to the Olympics next summer and struggling to attract investment as its economy falters.
Images flashed around the world of burning buildings, looters ransacking shops and police fighting with masked gangs risk damaging Britain's reputation as a place to visit and do business, analysts and business leaders said on Tuesday.
Crisis management expert Alex Woolfall said it was crucial that the police and government end the rioting quickly to avoid causing lasting damage to the perception of Britain overseas.
"If the story becomes 'one week of summer madness', then it will come and go and people will move on," said Woolfall, an executive at public relations company Porter Novelli.
"But if this drags on, or worse, that it looks like there is a genuine inability to stop it, then that really does start to change perceptions," he said, adding that the danger lay in worries building about security and whether the country had enough police.
The British Retail Consortium, a trade body which represents 90 percent of stores, said the rioting sent an "appalling message" to people at home and abroad.
"It will put people from other parts of the UK, and from abroad, off going to London in the medium term," said a spokesman.
Any decline in tourists' spending would be hard on British retailers at a time of low consumer confidence and public spending cuts. Britain's economy barely grew in the second quarter following six months of stagnation.
"The capital's firms (are) already bearing the heavy cost of the continuing economic turmoil," said Colin Stanbridge, chief executive of the London Chamber of Commerce and Industry, a business lobby group.
"At the peak of the tourist season and with only a year to go until the London 2012 Games, this really isn't the image we want to present to the world."
Harmful Headlines:
Wyn Grant, politics professor at Warwick University, said negative headlines around the world -- which declared "Britain's Burning" and "War Zone London" -- may cause short-term harm.
"It gives the impression of a city which is very unsafe for people to visit," he said.
Only last month, tourism chiefs announced that the world spotlight was on Britain before the Games, with VisitBritain, the state tourism body, saying it was a perfect time to show off Britain's history, culture and the "warmth of our welcome".
The marketing push was buoyed by the excitement and goodwill surrounding the wedding of Britain's Prince William and Kate Middleton in April.
Tourism supports around one in 12 British jobs -- nearly three million people either directly or indirectly -- and makes up about 9 percent of GDP, VisitBritain says.
The organisation sought to downplay the impact of the violence.
"In the year of the major riots in France, French tourism was resilient and I think that will be the same in Britain," Patricia Yates, a director at VisitBritain, told Reuters. "If the incidents we have seen on our televisions are stopped, I think we will recover very quickly."
But Germany issued a travel advisory for Britain, posting on the foreign ministry's website: "Travelers are advised to be especially careful and to pull out at the first signs of riots, and follow instructions of security forces."
And worries about Britain's reputation may linger well after the broken glass and bricks are cleared from the streets.
"I'm from Australia and was getting calls last night," said Australian Julie Wieczorek, who lives in Clapham, an upmarket neighbourhood that saw hours of disorder. "People have heard the word riots and they'll think twice about coming here."
Posted by PublicInformationProjects at 08:20 No comments: