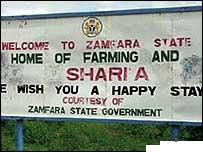 The wrists of Auwalu Abubaka(23) and Lawalli Musa(22) would  be amputated in public, a court in Zamfara State in northern Nigeria have ruled.
The sentence would be carried out according to Islamic laws which some predominantly Moslem states in northern Nigeria adhere to. The court also ruled that the convicts could appeal the sentence.
Alhaji Muhammadu Abubakar who heard the case said that the convicts pleaded guilty to the charge of stealing a bull.
"Based on the admission of guilt by the two of you of trespassing into the house and stealing a bull whose worth is well above the minimum value to warrant amputation, I hereby order that each of you should have his right wrist amputated," Muhammadu Abubakar ruled.
Abubakar also ruled that the sentence would take place on "market day for members of the public to witness".
Zamfara state incorporated Sharia laws into her legal system in 1999.
Posted by PublicInformationProjects at 02:14 No comments: