The Comptroller-general of Nigeria Customs Service(NCS), Alhaji Ahmed Dikko and the Minster of Power, Professor Bath Nnaji have been ordered by Nigeria's upper Parliament, the Senate to within seven days recover a $3 billion worth of equipment belonging to the National Independent Power Project(NIPP), which the Customs sold to a private firm or risk being arrested.
The upper legislative house yesterday threatened to issue warrants of arrest if the order is not complied with, within the stipulated period. The upper parliament also frowned at the suspension of some persons said to have been involved in the secret auction of the said equipment and the setting up of a committee to look into the matter by the Vice-president, Mr. Namadi Sambo. Senate described these actions as inadequate.
The Nigeria Customs Service however claimed that it did not know that the equipment belonged to the Power Holding of Nigeria Company(PHCN) at the time of the auction. Customs told Senate yesterday that the consignment landed at Apapa port consigned to a private firm. NCS said that import/export laws empower it to auction unclaimed consignments after ninety days from the date of landing.
The Customs defence notwithstanding, the Senate reiterated its order that the equipment must be recovered within seven days or the Customs Comptroller-general and Minister of Power would be arrested and prosecuted.

Posted by PublicInformationProjects at 11:27 No comments: 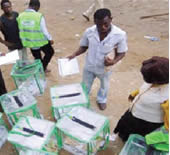 By Nelson Ekujumi
Ever since the conduct of the Local Government council elections in Lagos state on 22nd October 2011, by the Lagos State Independent Electoral Commission (LASIEC), the announcement of results by the Chairman has been greeted by acrimony and cries of fraud in some council areas by some of the parties who contested the elections.
While not holding brief for any of the gladiators, it is important for us to do an x-ray of the election in order to put issues in proper perspective as a means of avoiding noted pitfalls in future.
A clear outcome of the election was the low turnout of voters all over the state unlike what obtained in the last general elections conducted by INEC in April 2011. So many reasons can be adduced for this voter’s apathy but as an independent observer who monitored the elections, my observations are purely apolitical.
One realized that unlike the April general elections, the sensitization on this crucial election involving government at the grassroots was very low. The only means of sensitization through which people became aware of the election was the campaign train of some of the political parties some few days to the election, thus leaving the voters with little or not enough time to assess the candidates. This poor communication with the electorates is a serious blunder since democracy is all about the people and should be corrected against future occurrence.
Secondly, a lot of the parties are yet to come to terms with the fact that we are in a democracy and that the only way to protect and engender its growth is through nurturing the people’s interest by being sensitive to their feelings with regards to election of party candidates. Most of the candidates fielded for the election were products of imposition as there were no primaries to choose among the contestants by members even within the parties, thus negating the real essence of participatory democracy. This made a lot of people to lose interest in the whole process and thus refused to come out to vote on Election Day which is inimical to our democracy. This lack of internal democracy is a recurring decimal in our political process and portends grave danger unless the electoral umpire wakes up to her primary responsibility because this is the foundation block of any democracy.
Another reason which can be adduced for the voters apathy is the fact that our people are yet to come to terms with the fact that elections represents a golden opportunity for them to choose those to represent them politically. A lot of us fail to realize that politics is the allocation of scarce resources and therefore it is important to make sure that only responsible and credible persons of integrity get into elective office lest they fritter on frivolities our commonwealth and we remain underdeveloped.
Another notable pitfall of the local council elections was the presence of very few observers who could have given credibility to the process due to their impartiality. This is where, it is important to call on our international partners and organizations to note that election is election, whether at the local, state or national level since it all involves the participation of people.
A major drawback of the election which has generated this entire hullabaloo was the announcement of election results by the chairman in his office rather than on the field. This is unacceptable and is a relapse into the dark days of Maurice Iwu Chairmanship of INEC when election results were allocated based on the whims and caprices of a few individuals instead of the peoples votes. Election results worldwide are publicly announced at the polling units first before transfer to the collation centers for transparency and credibility sake. Whatever must have given room for this serious lapse should be looked into and corrected to avoid misgivings about the process in future if we are really serious of developing our democracy.
Lastly but not the least is the almost breakdown of law and order in the state by some aggrieved parties who feel cheated by the outcome of the election, this attitude of attempting to take law into one’s hands should be condemned by all lovers of conscience since violence does nobody any good because every life is important. As responsible citizens, it behooves on us to admonish any aggrieved party that it is illegal and unconstitutional to resort to self help in a democracy which is built on rule of law but that they should rather gather their facts and approach the courts if they feel that their rights have been infringed upon. We want them to note that we would not fold our arms and watch anybody no matter how highly placed try to ridicule us in the comity of civilized people by resort to might instead of the rule of law just like the NJC, Katsina Alu and President Jonathan did in the case against justice Ayo Salami only recently. The aggrieved parties should borrow a leaf from Governors Kayode Fayemi and Ogbeni Rauf Aregbesola who fought constitutionally and doggedly for close to four years before retrieving their stolen mandates in Ekiti and Osun states.
(Ekujumi is Chairman, Committee for the Protection of Peoples Mandate (CPPM) and Acting Executive Director, Centre for Rights and Policy Development, (CRPD))
Posted by PublicInformationProjects at 10:40 No comments: