President Goodluck Ebele Jonathan has approved the appointment of Mr. Ibrahim Lamorde  as the Acting Chairman/Chief Executive of the Economic and Financial Crimes Commission, EFCC.
The appointment takes immediate effect, and effectively relieves  Mrs. Farida Waziri of her position as EFCC Chairman.  Mrs. Waziri was appointed EFCC Chairman by Late President Umaru Musa Yar’Adua on May 18, 2008 and confirmed by the Senate on May 27, 2008.
Mr.  Lamorde, an officer of the Nigeria Police, was, until this appointment the Director of Operations of the EFCC. He was also Ag. Chairman of the EFCC before Mrs. Waziri assumed duty at the Commission.
Reuben Abati, Ph.d
Special Adviser to the President (Media and Publicity)
Posted by PublicInformationProjects at 03:26 No comments: 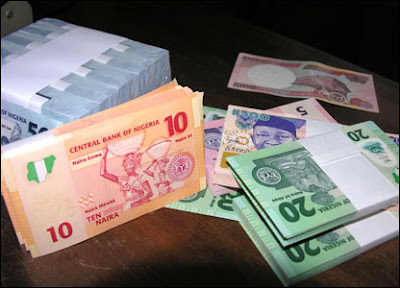 The Nigerian Central Bank's announcement on Monday devaluing the Naira helped the Nigerian Currency to stabilize, chidi opara reports learned. The Naira traded at #159.2 to $1 Dollar at noon on Tuesday.
The Central Bank's announcement also said that the 12 percent monetary policy rate would remain unchanged for now. The rate was last raised in October.
Investors in Nigeria’s three-year bond, who had anticipated a raise that never came, slacked investments in the country’s high yield investment paper preferring to wait for the next monetary policy announcement to be made in January 2012.
The devaluation pegged the Naira between #150-#160 to $1 Dollar, a move that also merged the official rate with the interbank rate. The Naira hitherto exchanged between #145-#155 to $1 Dollar.
The restiveness in Nigeria’s Oil bearing region which results in low output in the country’s oil production reduced economic growth to 7.72 percent earlier this year and to 7.4 percent in the last two quarters, necessitating the devaluation. Nigeria is an Oil dependent mono-economy.
Sanusi Lamido Sanusi, Central Bank's governor however advised against over reliance on statistics.
Posted by PublicInformationProjects at 02:40 No comments: