Posted by PublicInformationProjects at 03:19 No comments:

News Report: Attack On Christians In Nigeria Kills At Least 15 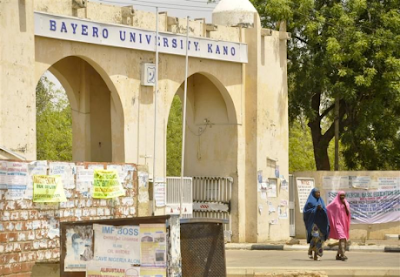 Gunmen killed at least 15 people and wounded many more on Sunday in an attack on a university theatre being used by Christian worshippers in Kano, a northern Nigerian city where hundreds have died in Islamist attacks this year.

Security sources said gunmen arrived on motorbikes and threw small homemade bombs into the theatre before shooting fleeing worshippers. There was sporadic gunfire in other parts of the city later on from attackers driven from the university by the army, the sources said.

"I counted at least 15 dead bodies. I think they were being taken to the Amino Kano teaching hospital," said a witness who did not wish to be identified. He said he saw many more people being treated for injuries.
A security source said at least 15 people were dead and a source at the hospital said by telephone he had seen 10-15 dead bodies brought in with gunshot wounds and dozens more wounded were being treated.
Bayero University spokesman, Mustapha Zahradeen, said two university professors had been killed in the attacks.

There was no immediate claim of responsibility.

Radical Islamist sect Boko Haram, which wants to carve out an Islamic state in northern Nigeria, has killed hundreds in bomb and gun attacks this year. It mainly targets police and authority figures but has also attacked churches.

The army said it had secured the area.

"The attack took place in one of the lecture theatres used as a place of worship by Christians. For sure there are casualties but I can't say how many," said Ikedichi Iweha, an army spokesman.

"The elements came, used explosives and guns to attack them. We have repelled them and cordoned off the area," Iweha said.

Red Cross officials said they were trying to get access and had no details on casualties.

Bomb Explosions:
"For over 30 minutes a series of bomb explosions and gun shots took over the old campus, around the academic blocks," said Mohammed Suleiman, a history lecturer at the Bayero University.

"It started at about 0930 (0830 GMT) this morning ... our school security men had to run for their dear lives. You can see smoke all over," Suleiman said.

Clashes between Boko Haram gunmen and security forces have flared up several times in Kano since the sect killed 186 people in January, its deadliest attack so far.

On Easter Sunday, 36 people were killed when a suspected member of Boko Haram attempted to force a car packed with explosives into a church compound during a service in the northern town of Kaduna.

After being stopped by security he turned back and the bomb exploded near a large group of motorbike taxi riders.

Boko Haram set off a series of bombs across Nigeria on Christmas Day last year, including one at a church outside the capital Abuja that killed at least 37 people.

Africa's most populous nation of more than 160 million is split roughly equally between a largely Christian south and a mostly Muslim north.

Suicide car bombers targeted the offices of Nigerian newspaper This Day in the capital Abuja and in Kaduna last week, killing at least four people in coordinated strikes.

This Day is based in southern Nigeria and is broadly supportive of President Goodluck Jonathan's government - the main target of Boko Haram's insurgency.

Jonathan has been criticised for failing to get a grip on the sect's wave of violence, which has gained momentum since his presidential election victory a year ago.

The president has relied mostly on a heavy-handed military approach to dealing with the violence and an attempt at mediated dialogue with the sect broke off last month after details of negotiations were leaked to the media.

On a visit to the This Day bomb site in Abuja on Saturday Jonathan refused to be drawn on whether talks with Boko Haram were ongoing but he did not count them out.

"Just like a war situation, you may dialogue; you may not dialogue, depending on the circumstances. But we will exploit every means possible to bring this to an end," Jonathan told reporters.

Posted by PublicInformationProjects at 07:46 No comments:


Posted by PublicInformationProjects at 03:21 No comments:

Charles Ghankay Taylor, the former President of Liberia, was convicted today on all counts of an 11-count indictment which alleged that he was responsible for crimes committed by rebel forces during Sierra Leone’s decade-long civil war. The Special Court’s Trial Chamber II found unanimously that Mr. Taylor aided and abetted RUF and AFRC rebels in the commission of war crimes and crimes against humanity in Sierra Leone.

The Prosecution had not alleged that Mr. Taylor had committed these crimes in person, but that he participated from Liberia in the commission of crimes by AFRC and RUF rebels and, under Articles 6.1 and 6.3 of the Special Court Statute, was individually responsible for them. The Chamber found that he had aided and abetted the rebels by providing them with arms and ammunition, military personnel, operational support and moral support, making him individually responsible for their crimes.

Charles Taylor is the first head of state to be indicted, tried and convicted by an international tribunal.

The Chamber has scheduled a sentencing hearing for Wednesday, 16 May 2012, and the sentencing judgement will be delivered on Wednesday, 30 May 2012. Under the Special Court Rules, sentences must be given in a specified term of years. The Special Court may not impose a life sentence or the death penalty.

Mr. Taylor was ordered remanded in custody until the 16 May hearing.
At the Special Court, both Prosecution and Defence may appeal. A notice of appeal must be filed within 14 days of the full judgement and sentence.

The Special Court for Sierra Leone is the first “hybrid” tribunal, created by an agreement between the United Nations and the Government of Sierra Leone, and is the first modern court to have its seat in the country where the crimes took place. It is the first court to convict former rebel and militia leaders for the use of child soldiers, for forced marriage as a crime against humanity, and for attacks directed at United Nations peacekeepers.

With today’s judgment, the Special Court has reached a major milestone, and is on course towards being the first modern international criminal tribunal to complete its mandate. 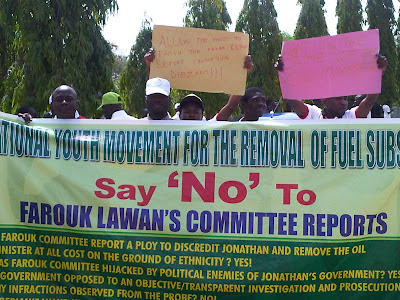 The United Action for Democracy (UAD) held its planned Anti-corruption rallies in Abuja and Lagos on Monday 23-04-12, calling for the prosecution of those found culpable in the fuel subsidy scam including the sack of the Petroleum Minister, Finance Minister and the Information Minister. The Abuja Venue was occupied by soldiers, while also soldiers took over the Gani Fawehinmi Park with their amoured tanks and rocket launchers at Ojota in Lagos.

Ironically, pro-corruption ‘protesters’ and their sponsors in government organized rallies in Abuja and Port Harcourt the following day, yesterday 24-04-12! The pro-corruption‘protesters’ were given Police protection and they had a field day justifying corruption. Shame!

In the meantime, while this government continues in its practice of misuse of the armed and security forces, by deploying them to harrass popular protests while protecting misguided rented crowds of youths protesting in support of corruption, fraudsters, and increased burden of poverty on ordinary citizens; the real threat to security is allowed to exploit the vacum left in selfish deployment of security forces to continue their reign of violence with the innocent and poor the ultimate victims!

The UAD Insists that all those found culpable in the fuel subsidy probe, Power Sector probe, Pension Funds probe, Halliburton, Seimens etc must be brought to book without further delay.
The ordinary masses, the poor, toiling people cannot continue to bear the brunt of corruption. Let the Trillion naira thieves pay for their crimes to serve as deterrent to others, who definitely, the people’s justice will catch up with.

We need more than President Jonathan’s promise to prosecute those indicted because he is part of the system. After all he has failed in his promises on insecurity, power generation, infrastructures and so on. Of note are the promises and assurances on security of lives and property which have failed so woefully! Insecurity pervades the county
Nigerians must know that it is our role to reclaim our country from the band of thieves that lords it over us! We must struggle to free ourselves from the tenacious grip of the corrupt, extremely wealthy and inept ruling class. Our goal must be for system change, an overhaul of this decadent order.

Nigerians must consolidate on the gains of the January Uprising for it not to be in vain by making sure that all‘cans of worms’ opened up by the House of Representative Probe Pane on Fuel Subsidy are not swept under the carpet. The revelations are part of the fruits of the people’s Uprising in January 2012 amongst others. When we dare to struggle, we dare to win.

The ‘gush of fresh air’ promised Nigerians by the PDP during the campaigns for the 2011 general elections is in full blast and seriously accelerating the impoverishment of the masses of the country. This gush which stinks to high heavens have embedded in it, a conscious plan to deepen the sufferings of the masses while a privileged few relish in stupendous ill-gotten wealth.
In the light of this, the UAD is saying we must return to the streets to ensure that corruption is tackled, shamed and punished! The UAD is calling for NATIONWIDE MASS ACTIONS to rescue our country from the path of perdition from 1stof May 2012.

· Immediate and full implementation of the fuel subsidy, power sector, pension probe reports
· Prosecution and punishment of those implicated and indicted in the probes
· Sack or resignation of the Ministers of Petroleum, Finance and Information.
· Immediate steps to determine actual daily consumption rate for petrol, actual daily production capacity for petrol b y domestic refineries; and therefore actual daily import requirement for petrol without these, there will always be fraud

No To ‘Business As Usual’! Yes To Social Transformation!!

Posted by PublicInformationProjects at 10:41 No comments: 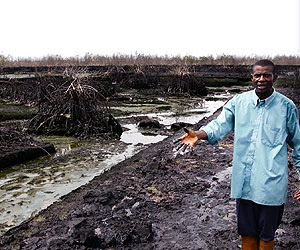 Corporations often exploit the weak regulatory systems in many poor countries, which makes the people living there some of the most vulnerable to corporate human rights abuses.

Oil has polluted the land and water of the Niger Delta, but the oil companies responsible have yet to clean it up properly. Meanwhile, local people have lost their livelihoods. Their health and their future are at risk.

As Shell prepares for its Annual General Meeting in May, it’s time to remind the Chief Executive, Peter Voser, of the company’s obligations to the people of the Niger Delta.

Sign our petition to Peter Voser, demanding that Shell Own Up to all the damage caused by its exploitation of the region. Shell must Pay Up for the cost of a Clean Up operation and compensation for those affected.