News Report: "The Nigerian Masses" Is chidi opara reports' Person Of The Year 2011 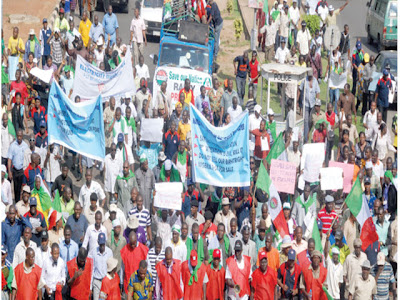 "The Nigerian Masses" have emerged chidi opara reports' Person Of The Year 2011.

Despite all that, "The Nigerian Masses" remained resolute.

Posted by PublicInformationProjects at 03:19 No comments:

The United Action for Democracy [UAD] condemns in the strongest terms the recent decision by the Federal Government to increase the price of petrol from N65 to N141 beginning on the 1st of January 2012.
The UAD considers this policy not only insensitive, ill thought out and absolutely unnecessary, but also provocative and inhumane. Given the fact that 70% of Nigerians live below what is considered the poverty line, and 90% live on less than $2 a day, an increase of this magnitude or whatever magnitude for that matter will spell social and economic doom for the vast majority of Nigerians who are already overburdened by unemployment, poor infrastructure, high cost of living, unaffordable basic social services and dwindling livelihoods.
The United Action for Democracy and indeed the generality of Nigerians are not convinced by government’s plea that the phantom extra funds to be derived from increasing the price of petrol will be ploughed into building ‘critical infrastructure’ and creating ‘safety nets’ for poor Nigerians. Going by previous similar promises  by the same economic think tank (like the $1billion to be saved annually from Paris Club debt deal and channeled into critical infrastructure), it is clear that this government has neither the will nor the sincerity of purpose to pursue real transformative and poverty alleviating economic reforms. Worse still, government’s failure to tackle the ‘cabal’ which it claims at every instance is responsible for colossal fraud in oil importation, and its failure to revamp the refineries (which by the way if operating at installed capacity can provide both the real and ‘ghost’ local consumption figures), is proof of this.
It is worrying that in a country that is rated as a key exporter of crude oil on the one hand, while its citizens are noted as some of the poorest in the world on the other; government will even contemplate such a debilitating economic policy. In real terms, an increase in the price of petrol will engender an attendant increase in the cost of all products and services, bearing in mind the transport implications of goods and services and the fact that homes and businesses generate their own power/electricity due to the failure of public power supply.
It is even more worrisome that while this regime is hell bent on imposing further hardships on us, it has just shamelessly presented the 2012 budget proposals to the National Assembly, where it is taking public funds [our money] to cover all the expenses of those in power. For example, we will pay 1.3billion naira to fuel the generators in the presidency, and 1 billion naira to feed the first family, while the rest of us are left to the mercy of the cabal to cover the cost of transportation and feeding among other things. This is simply not acceptable!
Based on the above, the United Action for Democracy calls on all Nigerians to rise up with one voice and as one to reject and resist this price increase. The United Action For Democracy shall, beginning on the 3rd of January 2012, initiate and coordinate with others a series of Mass Citizens Actions targeted at stopping this policy and tackling the rot in the petroleum sector.
The UAD calls on all citizens and citizens organizations to mobilize and take action in defense of their material survival and the survival of the country, as it is now very clear that our destiny is in our hands.
As we did in the era of military despotism, UAD will stand with the people all the way as we collectively reclaim our sovereignty from this alliance of treasury looters and the cabal.
Jaye Gaskia
National Convener .
Ken Henshaw
National General Secretary.
Posted by PublicInformationProjects at 03:00 No comments: