Credit: Reuters
Southern Nigerians could take up arms to fight northern Boko Haram Islamists, and are holding back only out of respect for the president, a former militant leader from the oil-rich Niger Delta said on Monday.
Mujahid Dokubo-Asari, a Muslim who led a rebellion in the delta until a peace deal with the government in 2004, said bomb attacks by Boko Haram could provoke retaliation by mostly Christian southerners, including those living in the delta.
President Goodluck Jonathan has already declared a state of emergency in parts of the north which Boko Haram targeted in Christmas Day bomb attacks, including one against a church near Abuja that killed 37 people.
The attacks, and their spread from the north into other parts of the country, have raised the prospect of sectarian and regional violence escalating in a country about evenly divided between mainly southern Christians and mainly northern Muslims.
Asked if northerners could be targeted by some from the majority Christian south, he replied: "It is seconds away ... Nigeria is on the precipice of a civil war."
"For Niger Delta people to take up arms is just a minute away. It's just Goodluck that is holding us back," said Asari, who is from Jonathan's southern, mainly Christian Ijaw tribe, but who converted to Islam.
"We have all reached the extreme. There is nothing anybody can do about it except we fight."
Asari's former group, the Niger Delta People's Volunteer Force, managed to push oil prices to record highs in 2004 with its constant attacks and threats against oil production in the delta's swampy creeks.
Since then, peace deals with the region's warlords have pacified the delta, and Boko Haram in the north has become the number one threat to Nigeria's security.
Full-bearded, shaven-headed, and wearing an ash-coloured Islamic robe, Asari paused to read some Facebook posts from his iPad about the Christmas Day bombs.
Asari said he was sceptical that the government could negotiate with moderate members of Boko Haram via "back channels" as National Security Adviser General Owoye Andrew Azazi suggested in an interview with Reuters.
Sitting in his large flat in the southeastern city of Port Harcourt, Asari said the group's faceless nature, an issue General Azazi acknowledged, made talks impossible.
"If you cannot identify the people who are carrying out these attacks, how can you dialogue with them, interact with them, and bring them round the table?" he said.
In any case, such extreme violence meant the time for talks had passed, he said.
"You cannot ask government to negotiate now. On what basis? The government should...rein these people in, or the people will resort to self-help," said Asari, who stressed where his loyalties lay despite being a Muslim.
"Anybody that wants to start any revolution in Goodluck's time, we the Ijaw will pull down that revolution," he said.
Posted by PublicInformationProjects at 11:25 No comments: 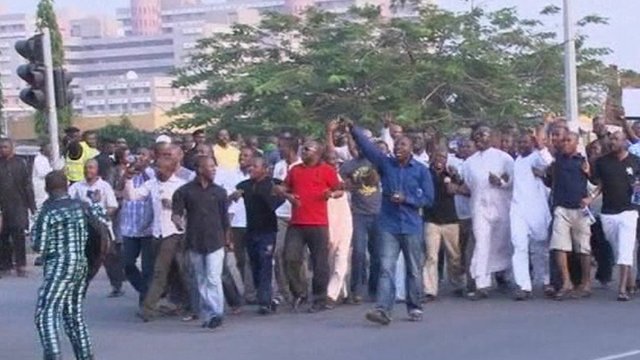 The Rivers State Civil Society Community and the United Action for Democracy [UAD] condemns in the strongest terms the recent decision by the Federal Government to increase the price of petrol from N65 to N141 beginning on the 1st of January 2012.
We consider this policy not only insensitive, ill thought out and absolutely unnecessary, but also provocative and inhumane. Given the fact that 70% of Nigerians live below what is considered the poverty line, and 90% live on less than $2 a day, an increase of this magnitude or whatever magnitude for that matter will spell social and economic doom for the vast majority of Nigerians who are already overburdened by unemployment, poor infrastructure, high cost of living, unaffordable basic social services and dwindling livelihoods.
As it stands, cost of transport, goods and other services have already tripled in Rivers State and elsewhere. Transport fare from Port Harcourt to Aba that used to be N300, is now N2500. Some families who travelled out of the State for the festivities are already stranded as their budget can no longer ferry them back home.
We and indeed the generality of Nigerians are not convinced by government’s plea that the phantom extra funds to be derived from increasing the price of petrol will be ploughed into building ‘critical infrastructure’ and creating ‘safety nets’ for poor Nigerians. Going by previous similar promises  by the same economic think tank (like the $1billion to be saved annually from Paris Club debt deal and channeled into critical infrastructure), it is clear that this government has neither the will nor the sincerity of purpose to pursue real transformative and poverty alleviating economic reforms. Worse still, government’s failure to tackle the ‘cabal’ which it claims at every instance is responsible for colossal fraud in oil importation, and its failure to revamp the refineries (which by the way if operating at installed capacity can provide both the real and ‘ghost’ local consumption figures), is proof of this.
It is worrying that in a country that is rated as a key exporter of crude oil on the one hand, while its citizens are noted as some of the poorest in the world on the other; government will even contemplate such a debilitating economic policy. In real terms, an increase in the price of petrol will engender an attendant increase in the cost of all products and services, bearing in mind the transport implications of goods and services and the fact that homes and businesses generate their own power/electricity due to the failure of public power supply.
It is even more worrisome that while this regime is hell bent on imposing further hardships on us, it has just shamelessly presented the 2012 budget proposals to the National Assembly, where it is taking public funds [our money] to cover all the expenses of those in power. For example, we will pay 1.3billion naira to fuel the generators in the presidency, and 1 billion naira to feed the first family, while the rest of us are left to the mercy of the cabal to cover the cost of transportation and feeding among other things. This is simply not acceptable!
Based on the above, we call on citizens in Rivers State to rise up with one voice to reject and resist this price increase. Beginning from Monday the 9th of January, 2012, we shall mobilize citizens to begin an indefinite series of mass actions aimed to registering discontent over the suffering this policy has already began to bring about.
We note with indignation the recent statement credited to the Police Commissioner in charge of Rivers State asking citizens not to organize or participate in protests. We wish to remind him that freedom of assembly and the right to express discontent over the policies of government, are fundamental rights of citizens. Let it also be noted that we shall mobilize Nigerian based and International media, as well as relevant domestic and international human right bodies to observe as we nonviolently express our discontent.
We calls on all citizens and citizens organizations to mobilize and take action in defense of their material survival and the survival of the country, as it is now very clear that our destiny is in our hands.
Ken Henshaw, National General Secretary, United Action for Democracy
Patrick Naagbanton, Coordinator, Centre for Environment, Human Rights and Development
Celestine AkpoBari, Coordinator, Ogoni Solidarity Forum
Posted by PublicInformationProjects at 11:05 No comments:

Well-done to compatriots in Kogi and elsewhere across Nigeria, as the anger engendered by the hiking of fuel prices catches on, and the organised resistance to this and other anti-people policies of the Nigerian state and government spreads across the country.

Before the hiking of fuel prices was effected on January 1st 2012, preparatory actions had been organised and had taken place in places like Warri, Benin, Lagos, Ibadan, Osogbo, Ilesa.
And since the hiking on January 1st we have had organised actions in Lagos [two days running now]; Ilorin [also two days running now, and where we have suffered the first fatality - a student shot and killed]; Ibadan [today], Kano [also two days running now]; Abuja [yesterday]; Lokoja [today]; Keffi [today]; Makurdi [Today]; Port Harcourt [today]; Bomadi in Delta state [yesterday].

Occupy Nigeria is building up and deepening into the Nigerian Harmathan!

Further actions are expected in these and other places tomorrow and throughout the week building up to a truly national and nationwide momentum next week.

In Solidarity,
Jaye Gaskia
UAD
Posted by PublicInformationProjects at 10:33 No comments: