The Committee for the Defence of Human Rights (CDHR) wishes to re-affirm that Muyideen Mustapha of the Opobiyi family Ilorin was murdered by the Nigeria police against the inconsistent lies by the police. The Inspector General of Police (IGP) was quoted this morning on the network news that he was murdered by Butchers (those who slaughter animals) twisting the earlier version of the Kwara State Police Command that Muyideen was killed by protesters. The question a reasonable mind would now ask is; what would butchers be doing among protesters at the front of the post office while t abattoir their abode of operation is in far away Olooje, Ipata Market?
This is a mockery of the police (FORCE) and a toga of ignoble exigencies from the government organ saddled with the responsibility of protecting lives and property. The CDHR is waiting for the next line of twist and inconsistency from the police over her primitive display of naked force against defenceless citizens as witness in the Ilorin killing.
The CDHR having investigated the ugly incident found that the deceased was shot by men of the Special Anti-Robbery Squad (SARS) of the Kwara State police Command. The series of twists and inconsistency in this case exposes the deceit and cacophony of lies of the Nigeria police.
Rather than shameless cover up, we expect the police to fully investigate and bring the killers of Muyideen to face the law.
The CDHR calls on all Nigerians to troop out as from Monday January 9, 2012 for the- mother- of- all- protests against the inhuman and astronomical increase in petroleum price. This struggle is a class struggle; the poor against the ruling cabals. Reject all forms of slavery by these slave masters.
Comrade Taiwo Otitilaye
National Vice President, CDHR
Posted by PublicInformationProjects at 07:08 No comments: 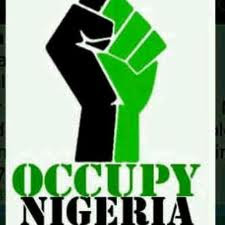 Nigerians under the auspices of the Nigerian Democratic Liberty Forum (NDLF) would be rallying in solidarity with the suffering masses of Nigeria over the government's cruel increase in prices of petroleum products.

This ill advised, inhuman and sadistic 117% increase in price of fuel exposes the determination of the government to annihilate the poor Nigerian masses who are groaning under very deplorable conditions of living. A government that is incapable of rescuing its people from the abyss of economic ruins should not exacerbate the hapless situation of the suffering masses.

To this end, Nigerians in the US would express solidarity with the Nigerian people:

1. That the Nigerian government revert to the old prices.

2. That the government institute a panel of inquiry that includes representatives of Labour, Civil society, professional bodies etc to investigate the practices of petroleum products importation, distribution and payments over the past 13 years.

3. That the report of this inquiry should form a basis for the prosecution of those individuals, companies and their collaborators who have defrauded the country through sharp practices associated with importation of petroleum products.

7. That corruption in the oil sector and other areas should be confronted and perpetrators brought to book. The poor masses should not be made to pay for the incompetence and corruption of government officials.

8. That the government should not underestimate the people's ability and resolve to protest the continuous rape of the country by friends and cronies of government.

Join us as we express solidarity with our people at home.