Credit: AFP
Nigerian soldiers have arrested six Islamists described as high-ranking members of the Boko Haram sect during a raid in the northeastern city of Maiduguri, an officer said Wednesday.
Acting on a tip-off, soldiers from the Joint Task Force (JTF) on Tuesday raided a hideout used by the extremist group -- which has claimed a string of deadly attacks in recent days -- and defused five bombs across the city.
"We have succeeded in arresting six high-profile members of Boko Haram in a raid on their hideout following useful information provided us by some residents," JTF commander Victor Ebhaleme told AFP.
He said the six were being interrogated and gave no further details.
In another part of the city, notorious for bomb and shooting attacks blamed on Boko Haram, soldiers defused five bombs.
"We defused five IEDs (improvised explosive devices)... we believe to have been planted by members of the Boko Haram sect which would have wreaked monumental havoc if they had detonated," Ebhaleme said.
Troops on Tuesday shot dead four suspected members of the sect and injured five others in the same city.
Maiduguri is the home ground of Boko Haram, a shadowy Islamist group blamed for increasingly deadly and sophisticated attacks in recent months.
It is believed to have a number of factions with differing aims, including some with political links, while speculation has also mounted over possible links between the group and Al Qaeda's North African branch.
It has claimed responsibility for the Christmas day bombing of a church near the capital Abuja in which at least 40 people were killed.
A key Boko Haram suspect arrested at the weekend in connection with the attack on Catholic worshippers filing out of a Christmas service, escaped from police custody, police admitted on Tuesday, dealing an embarrasing blow to Nigeria's efforts to crack down on the sect.
President Goodluck Jonathan has said some Boko Haram members are in the country's security agencies and even in government, including the legislature, the judiciary and in the executive.
The sect has been blamed for intensifying attacks in Nigeria, including an August suicide bombing of UN headquarters in Abuja that killed at least 25, but the Christmas bombs at churches sparked fears of reprisals from Christians.
Nigeria, Africa's most populous nation, is roughly divided between a mainly Muslim north and predominately Christian south.
Christian leaders have warned that they will have to defend themselves if authorities do not address the spiralling violence, leading to warnings from prominent intellectuals that Nigeria could be heading towards civil war.
Posted by PublicInformationProjects at 09:38 No comments:

The World Bank has announced the appointment of Makhtar Diop, a Senegalese, as its new Vice-president for Africa. Diop succeeds Nigeria’s Obiageli Ezekwesili, who has been on that desk since 2007.

Diop, who joined the World Bank in 2001 and has been the World Bank’s Country Director in Brazil since 2009 will assume office on May 6th.

Robert B. Zoellick, World Bank President summarized Ezekwesili's tenure as "five years of important and successful service to the Bank and to Africa.”

Mr. Zoelick said further that "Under Oby’s leadership, our Africa team employed innovation, knowledge, partnership and financial services to strengthen results across Africa and to improve the prospects for Africa’s economic performance. Her close attention to the needs of our clients, engagement with African leadership and with regional institutions, as well as with the UN and other partners, has helped us to leverage our effectiveness across Africa.  Oby has done excellent work mobilizing private sector engagement and better connecting Africa’s development to that of other regions, particularly through South-South partnerships,"

"We wish Oby all the best in her future endeavors working with civil society, in which she will help to strengthen public sector capacity, and work especially with young people and women.  I am especially appreciative of her committed and devoted service, including the years spent away from her family," Mr. Zoellick concluded.
Posted by PublicInformationProjects at 01:32 No comments:

News Report: Jerry Yang, ‘Chief Yahoo,’ Steps Down From Board

Credit: The New York Times
Jerry Yang has left Yahoo, the stumbling Internet company he co-founded 17 years ago, the company announced Tuesday.
In a statement, Roy Bostock, Yahoo’s chairman, said Mr. Yang would immediately give up his board seat at Yahoo and step down from the boards of the Alibaba Group and Yahoo Japan.
Mr. Yang did not give a reason for his departure, but it occurred as the company undergoes a strategic review under a new chief executive, Scott Thompson, on whether the company should sell off its Asian interests and focus on its media assets. Yahoo owns a 40 percent stake in Alibaba and a 35 percent stake in Yahoo Japan.
Mr. Yang’s departure comes less than two weeks after the board named Mr. Thompson, an eBay executive running its PayPal unit, as chief executive.
Mr. Yang, who co-founded the company in 1995, also had the official title of “chief Yahoo” and was the face of the company’s rise and its decline. He stood in the way of a 2008 takeover attempt by Microsoft that valued the company at $47.5 billion. Shareholder dismay with that decision — and Yahoo’s subsequent inability to find its way — has left the company with a market value of less than half that today.
“Yahoo is losing the last piece of what was viewed by many as a stumbling organization,” says Allen Weiner, a Gartner analyst.
Yahoo analysts and company insiders say that Mr. Yang’s departure has cleared the way for the sale of its assets abroad. The company has been in negotiations with Alibaba and Softbank — a potential acquirer of Yahoo’s share in Yahoo Japan — on a proposed sale of its stakes valued at approximately $17 billion. “Arguably Jerry Yang is the person best known and associated with Yahoo,” says Scott Kessler, an analyst at Standard and Poor’s. “It is fair to say that, whether in terms of reality or perception, he has detracted from the company’s ability to realize shareholder value.”
Mr. Yang played a heavy hand in discussions about Yahoo’s future, according to people close to the matter, who spoke on the condition of anonymity because the talks were private. At times, Mr. Yang’s opinions seemed to diverge from the board’s consensus, these people said, creating a tense — and occasionally confusing — backdrop for negotiations.
Mr. Yang, along with other board members, also faced mounting pressure from activist investors, like Daniel Loeb of Third Point, who has called for the dismissal of both Mr. Yang and Mr. Bostock. Two other people close to board, who requested anonymity in order to maintain business relationships, said that the board was discussing the addition of new directors and several current board members are expected to depart. Yahoo refused to comment.
Shares of Yahoo gained more than 3 percent in after-hours trading after the announcement Tuesday.
Posted by PublicInformationProjects at 00:56 No comments: 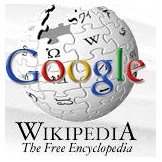 Credit: AFP
Wikipedia went dark, Google blotted out its logo and other popular websites planned protests on Wednesday to voice concern over legislation in the US Congress intended to crack down on online piracy.
Wikipedia shut down the English version of its online encyclopedia for 24 hours to protest the Stop Online Piracy Act (SOPA) introduced in the House of Representatives and the Senate version, the Protect IP Act (PIPA).
Google placed a black redaction box over the logo on its much-visited US home page to draw attention to the bills, while social news site reddit and the popular Cheezburger humor network planned to shut down later in the day.
The draft legislation has won the backing of Hollywood, the music industry, the Business Software Alliance, the National Association of Manufacturers and the US Chamber of Commerce.
But it has come under fire from digital rights and free speech organizations for allegedly paving the way for US authorities to shut down websites accused of online piracy, including foreign sites, without due process.
"For over a decade, we have spent millions of hours building the largest encyclopedia in human history," Wikipedia said in a message posted at midnight (0500 GMT) on its darkened website.
"Right now, the US Congress is considering legislation that could fatally damage the free and open internet. For 24 hours, to raise awareness, we are blacking out Wikipedia."
The founders of Google, Twitter, Wikipedia, Yahoo! and other Internet giants said in an open letter last month the legislation would give the US government censorship powers "similar to those used by China, Malaysia and Iran."
"We oppose these bills because there are smart, targeted ways to shut down foreign rogue websites without asking American companies to censor the Internet," a Google spokesman said Tuesday.
"So tomorrow we will be joining many other tech companies to highlight this issue on our US home page," the spokesman for the Internet search giant said.
Reddit said it will shut down for 12 hours -- from 8:00 am to 8:00 pm (1300 GMT to 0100 GMT) -- to protest the legislation.
"We wouldn't do this if we didn't believe this legislation and the forces behind it were a serious threat to reddit and the Internet as we know it," reddit said.
"The freedom, innovation, and economic opportunity that the Internet enables is in jeopardy."
Ben Huh, the founder of Cheezburger network, said on his Twitter feed that his 58 sites, which include icanhascheezburger.com, FAIL Blog and The Daily What, will observe a blackout on Wednesday.
Wikipedia founder Jimmy Wales announced the plans to shut down the site in a message on his Twitter feed.
"Student warning! Do your homework early. Wikipedia protesting bad law on Wednesday!" Wales said.
"This is going to be wow. I hope Wikipedia will melt phone systems in Washington on Wednesday. Tell everyone you know!" he said.
Volunteer-staffed Wikipedia turned 11 years old on January 15 and boasts more than 20 million articles in 282 languages.
The White House expressed concern about the anti-online piracy bills in a statement over the weekend.
"While we believe that online piracy by foreign websites is a serious problem that requires a serious legislative response, we will not support legislation that reduces freedom of expression, increases cybersecurity risk, or undermines the dynamic, innovative global Internet," it said.
"Any effort to combat online piracy must guard against the risk of online censorship of lawful activity and must not inhibit innovation by our dynamic businesses large and small," the White House said.
News Corp. chief executive Rupert Murdoch, who backs the US legislation, accused the "blogosphere" of "terrorizing many senators and congressmen who previously committed" to supporting it.
"Nonsense argument about danger to Internet. How about Google, others blocking porn, hate speech, etc? Internet hurt?" he wrote on the popular micro-blogging website.
Posted by PublicInformationProjects at 00:43 No comments: