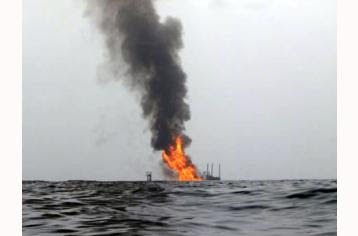 Credit: Associated Press
The burning inferno of what used to be a Chevron Corp. natural gas rig still stains the night’s sky orange more than two weeks after the rig caught fire, and no one can say when it will end as swarms of dead fish surface.
The environmental damage is hitting a region whose poor still rely on the delta’s muddy waters for survival. A nearby clinic remains overrun with patients who are showing up with skin irritations and gastrointestinal problems.
“The community here has no other source of water apart from the river water, which on its own isn’t even safe enough to drink, but the pollution has made the water even worse,” said Dr. Oladipo Folorunso, the only doctor in the town of Ikebiri.
Folorunso attributes the illnesses to the burning rig, as rising temperatures in water can cause bacteria to thrive. A satellite image showed that the fire at a point was at least 1,340 degrees Fahrenheit (nearly 730 degrees Celsius), “hot enough to soften steel,” an independent watchdog group called SkyTruth said.
The fire began Jan. 16 from a shallow-water gas well for Chevron’s Nigerian subsidiary near its North Apoi oil platform. The accident killed two foreign workers and caused tens of millions of dollars in damage.
Chevron says it continues to investigate what started the fire but is not offering any estimate on how long it will burn.
Nigeria’s government believes a “gas kick” — a major buildup of gas pressure from drilling — was responsible, said Levi Ajuonoma, a spokesman for the state-run Nigerian National Petroleum Corp.
In Koluama 1, a community less than six miles (10 kilometers) from the fire, the traditional ruler says Chevron and the federal government are not doing enough to address the problem.
“We need the federal government to come in,” Jeremiah T. C. Leghemo said. “These relief materials are provided by Chevron because the state government prevailed on Chevron to provide them, but the people are suffering.”
Chevron said last week that it was moving “food and supplies to the communities in the area to recognize the help and support that they have given us.”
A report by local watchdog Environmental Rights Action said the area — home to tens of thousands of people — received 50 bags of rice, 50 bags of cassava flour, one cow, vegetable oil, palm and groundnut oil, cartons of tomatoes and canned drinks.
The federal government is still putting together help for the community, said Yushau Shuaib, spokesman for Nigeria’s National Emergency Management Agency. He could not immediately say what the materials would include.
It also remains unclear when the fire will be put out. Chevron, based in San Ramon, California, has said that it would take 30 days to drill to total depth of 9,000 feet (2,740 meters) to create a relief well that would help put out the fire.
The company on Thursday said it had finished its drilling plans. When pressed to say how long it would take to extinguish the fire, the company declined to comment.
“We cannot predict how long the process will take, but what we can tell you is we will do so as quickly as possible while continuing to maintain safe operations,” the company said in a statement.
Critics say the situation around the burning rig is symptomatic of how the government that enjoys billions from oil sales fails to protect its people.
Foreign firms have pumped oil for more than 50 years out of the delta, a region of swamps, mangroves and creeks roughly the same size as South Carolina. Many in the delta remain desperately poor, living in polluted waters without access to proper medical care, education or work.
Nigerian regulators often fall back on international standards set by engineering and trade groups as a yardstick for safety measures, but the country’s institutionalized graft and mismanagement means oil companies largely answer only to themselves in safety matters.
Posted by PublicInformationProjects at 00:48 No comments: