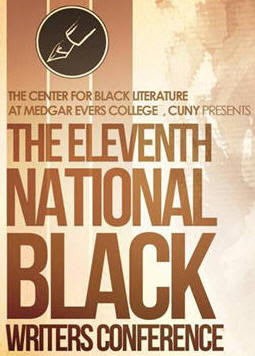 On Friday, March 30, 2012, the Eleventh National Black Writers Conference will present "By Any Means Necessary, Malcolm X: Real, Not Reinvented," a roundtable discussion on Manning Marable’s biography of Malcolm X, from 5:30 p.m. to 6:45 p.m. in the Founders Auditorium at Medgar Evers College, 1650 Bedford Ave., Brooklyn, NY 11225.

Moderated by Dr. Khalil Gibran Muhammad, director of the Schomburg Center for Research in Black Culture and a great-grandson of the Honorable Elijah Muhammad, the event features participants Herb Boyd, Ron Daniels, Regina Jennings, Haki Madhubuti, Diane D. Turner, and Michael Simanga. This discussion provides readers with a more comprehensive view of the Marable text by continuing and expanding the debate arising from the biography.  More than 35 scholars, poets, essayists, and educators have contributed to this anthology.

This thought-provoking roundtable discussion is an exciting component of the four-day Conference. The Conference, to be held March 29 through April 1, 2012,  has been hailed by many authors, scholars, and publishers as “necessary” and arguably one of the most important events for African-American writers.

Centered around the theme “The Impact of Migration, Popular Culture, and the Natural Environment in the Literature of Black Writers,” the 2012 Conference will honor literary and cultural icons Kenyan-born writer Ngũgĩ wa Thiong’o; poet, novelist, essayist, and publisher Ishmael Reed; poet Nikki Giovanni; and Dr. Howard Dodson, former director of the Schomburg Center for Research in Black Culture.

Dr. Myrlie Evers-Williams will serve as Honorary Chair for the 2012 Conference. More than 70 writers, scholars, and literary professionals will participate in the four-day event. Conference highlights include a poetry cafe, a film series, a reading series, an awards and tribute program, talkshops, panel discussions, book signings, and much more. The Conference is open to all and some of the events are free and open to the public.

Sponsored by the Center for Black Literature at Medgar Evers College, CUNY, the National Black Writers Conference (NBWC) provides emerging and established writers, literary scholars, critics, agents, publishers and booksellers, as well as the general public, with a forum to share the writing published by Black writers, discuss the trends and themes in Black literature, and identify the major issues and challenges faced by Black writers and those in the business of reading, publishing, and selling Black literature.

Each subsequent Conference is built on the previous one, attracting a national and international audience. The Conference is currently held biennially; on alternate years, literary symposia are held.

Founded in 2003, and spearheaded by Dr. Brenda M. Greene, the Center for Black Literature at Medgar Evers College, CUNY, was established to expand, broaden, and enrich the general public’s knowledge and aesthetic appreciation of the value of Black literature; to continue the tradition and legacy of the National Black Writers Conference; to serve as a voice, Mecca, and resource for Black writers; and to study the literature of people from the African Diaspora. It is the only Center devoted to this in the country.
Posted by PublicInformationProjects at 06:37 No comments: