The Chair of judges, author and Fellow of the Royal Society of Literature Bernardine Evaristo MBE, has described the shortlist as "truly diverse fiction from a truly diverse continent."

The Caine Prize, Africa's leading literary award, is now in its thirteenth year. Involved from the beginning, Ben Okri, the internationally acclaimed Nigerian writer was announced as the Vice President of the Prize last week (26 April 2012). Ellah Allfrey OBE, deputy Editor of Granta magazine is the new Deputy Chair.

The 2012 shortlist comprises:
Selected from 122 entries from 14 African countries Bernardine Evaristo said, "I'm proud to announce that this shortlist shows the range of African fiction beyond the more stereotypical narratives. These stories have an originality and facility with language that made them stand out. We've chosen a bravely provocative homosexual story set in Malawi; a Nigerian soldier fighting in the Burma Campaign of WW2; a hardboiled noir tale involving a disembodied leg; a drunk young Kenyan who outwits his irate employers; and the tension between Senegalese siblings over migration and family responsibility."
The winner of the £10,000 prize is to be announced at a celebratory dinner at the Bodleian Library, Oxford, on Monday 2 July.

Posted by PublicInformationProjects at 10:12 No comments:

Posted by PublicInformationProjects at 09:27 No comments:

News Release: Workers' Day; It Is Time To End Corruption And Insecurity 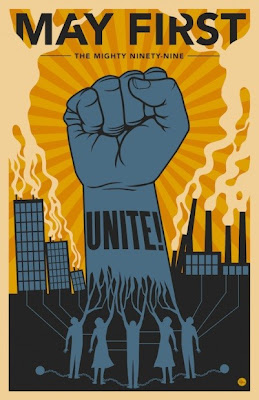 Nigeria hangs on the fringes of total political, social and economic collapse. This reality is premised on the numerous challenges facing the country on all fronts. Politically, the internal wrangling of the Nigerian political elite has left the country tilting directionless, clearly heading for a major upheaval at best, and a state of anarchy at worst. Socially, the failure of the political class to address long standing issues of national identity and religious co existence has engendered a low intensity religious war (howbeit from one section at the moment) which daily exterminates innocent Nigerians just finding a way to survive in a country where government has failed to provide the basic necessities including security. Economically, a mixture of puerile policy directions and crass corruption; spiced with a knack for pursuing tested and failed neo liberal economic models inspired by discredited international financial institutions and their collaborators; has destroyed the basis for economic vibrancy and driven the vast majority way below the poverty line.

Fast marching towards 52 years of independence, Nigeria has not made any significant progress in evolving a vibrant political leadership, either institutionally or individually. On all indicators, the ‘giant of Africa’ fares miserably at a time less endowed Countries are clearly recording significant progress. The spate of corruption and economic sabotage almost daily being revealed is an attestation to this fact. The wealth of the state is wasted on the insatiable kleptomania of a corrupt, brigand and inept ruling elite.

Fast marching towards 52 years of independence, Nigeria has not made any significant progress towards building a nation where all persons can count on the security of their lives despite which part of the country they emanate from or which of the religions they subscribe to. Years of neglect and contempt by the political class towards the sincere calls by Nigerians for the convocation of a conference where the basis of the continued existence of the country will be discussed in a civilized engagement of citizens and stockholders, has engendered the current situation where armed groups have taken the initiative, and redefined that same sovereignty which the ruling class fears so much to discuss.

Fast marching towards 52 years of independence, Nigerians are amongst the poorest people in the world. 70percent of the population live on less than N160 a day, while 90percent exist on less than N320 daily. The wealth of the nations has continued to fail to translate into a fairer existence for the bulk of citizens.

For the majority of impoverished Nigerians, who are at the receiving end of the failure of the state, Enough is Enough!

It is on the basis of the above that the United Action for Democracy calls on all Nigerians, workers, unemployed and the unemployable to use the occasion of the Workers Day to demand the fulfilment of their social contract with the Nigerian State. The UAD will continue to mobilize its vast supporters and the majority of Nigerians through a series of indefinite mass actions to demand justice and equity from the Nigerian state. For the avoidance of doubt, the UAD still demands in the immediate;

·        THE IMMEDIATE RELEASE AND FULL PUBLICATION OF THE REPORTS OF THE POWER SECTOR, FUEL SUBSIDY, PETROLEUM SECTOR AND PENSION PROBES;

·        IMMEDIATE AND FULL IMPLEMENTATION OF THE FUEL SUBSIDY, POWER SECTOR AND PENSIONS PROBE REPORTS; PROSECUTION AND PUNISHMENT OF THOSE IMPLICATED AND INDICTED. EXEMPLARY PUNISHMENT TO GUILTY COMPANIES;

·        IMMEDIATE STEPS TAKEN TO DETERMINE ACTUAL DAILY CONSUMPTION RATE FOR PETROL; ACTUAL DAILY PRODUCTION CAPACITY FOR PETROL BY DOMESTIC REFINERIES; AND THEREFORE ACTUAL DAILY IMPORT REQUIREMENT FOR PETROL. WITHOUT DETERMINING THESE, THERE WILL ALWAYS BE FRAUD;

·        AND DEVELOPMENT AND IMPLEMENTATION OF A 24 MONTH STRATEGIC INTERVENTION PLAN TO ACHIEVE SELF SUFFICIENCY IN DOMESTIC REFINING CAPACITY FOR PETROLEUM PRODUCTS.

UAD calls on all organisations of citizens - religious, civic, trade unions, ethic nationalities; to collaborate and jointly organise two days of mass rallies for peace and development and against poverty and insecurity!

Furthermore UAD calls on ordinary Nigerians to come together and work towards organising a popular mass political party on the platform of which to collectively organise to retake our country from these league of looters!

The United Action for Democracy is resolved to initiate another series of mass actions aimed at compelling the government to do the right thing. We are bold to state that our country cannot keep groping in the dark while a few with access to the coffers of the state steal it blind.

Posted by PublicInformationProjects at 04:42 No comments: