Photonews: Allegedly Caught With Explosives At Radio House In Abuja 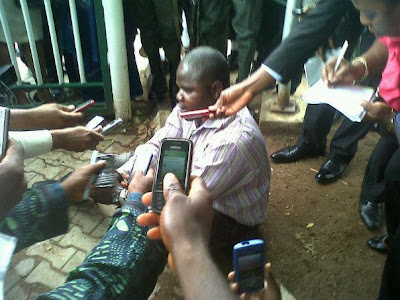 Posted by PublicInformationProjects at 11:18 No comments:

I have watched and listened with keen interest to the uproar generated in the polity by reactions to Rtd. Gen. Buhari’s recent warning against any form of electoral malpractice being planned for the 2015 general elections in order to avoid impending calamity. While some of the reactions have been made clearly with good intentions, others have been made with sinister motive, but the one I found most repulsive and nauseating was that of the Presidency who instead of addressing the issues raised in the message by this Patriotic and Nationalist elder statesman, resorted to mudslinging which once again re-emphasized the character of those occupying the highest political office in the land.

What Gen. Buhari has done by this timely warning deserves the highest commendation from any patriotic and sincere individuals and groups who are desirous that Nigeria should get it right and reclaim her rightful position in the comity of civilized people because of the fact that the World’s black community, despite our failings and embarrassment is still waiting on us for direction.  With this timely warning, Gen. Buhari has performed the role of an elder in justification of the African adage which says that “Agba kii wa loja, ki ori omo tuntun woo” literally meaning that an elder cannot be in the town and allow it to burn”. Thanks in a million, the peoples General.

That the Nigerian political class has always broken new records in the conduct of scandalous elections is not in doubt. From 1999 till 2011, we have been conducting shameless elections. We have witnessed ingenuity in electoral malpractices in the land which has further damaged our already poor image in the eyes of the world. We have consistently witnessed an entrenched pattern of returning 99.9% or 100% percent votes for candidates in elections in this country which is a negation of all the indices of voters turnout anywhere in the world.

One would have expected any serious society with a sincere government to take the warning as a patriotic call to duty to do what is right for the sake of justice and humanity, but what did the Presidency do, they resorted to name calling and whipping up unnecessary sentiment just to divert attention from the main issue. Was it not in this same country that the Rtd Justice Uwais committee on electoral reforms submitted its report to Mr. President which advocated among others the setting up of an electoral offences commission to deal with electoral offences as a way of curbing electoral malpractices which is our political class stock in trade? Right even before our own eyes, the chief electoral umpire, Prof. Attahiru Jega, immediately after the 2011 General elections and till date has consistently been lamenting the helplessness of the electoral body in arraigning indicted electoral offenders before the law due to the non existence of enabling laws. Till date, the executive has turned blind eyes to this patriotic clamour by all and sundry knowing she stands to benefit from electoral manipulations.

One expects the Goodluck Jonathan administration to respond concretely and factually to issues and myriads of problems confronting the Nigerian state with the same speed and urgency with which it responds to genuine and patriotic criticisms by well intentioned individuals and groups. The country has epitomized all the symptoms of a failed state but the Presidency is pretending by mischievously telling us that all is well when we all know we are sitting on a keg of gun powder.

Another worrisome dimension to this ugly incident is the ehtnicization of the patriotic warning of Rtd. Gen.Buhari by some individuals and groups which is capable of worsening the already fragile unity of the Nigerian state. Statement such as, Northern elders should come up publicly to condemn Boko Haram when they have never for once justified it is not in order. How many times have elders from the South West come up publicly to condemn armed robbery which is ravaging the land or Eastern elders come up together to publicly condemn kidnapping which is the business of the day there? If anybody has made any statement or committed any act, the most reasonable thing for us to do as civilized people is to examine it dispassionately in the interest of the society rather than giving it ethnic coloration which has the tendency to further generate an already existing bad blood among nationalities in the country.

What the Presidency has done by this name calling in reaction to the timely warning by Gen. Buhari on the 2015 elections is to confirm that the suspicion of the General and Nigerians on the plot to manipulate the forthcoming elections is correct and that the enemies of the Nigerian people won’t tolerate any predictive criticism of their diabolical plot to violate the constitution and plunge the country into chaos just to cling on to power at the peoples expense. The truth of the matter right now is that Gen. Buhari has sounded the alarm bell and as an African adage says “Igi gogoro ma gun mi loju, ati oke la ti nwo“ which means that “You ward off an impending danger by looking at it from afar”.

Eternal vigilance is the watchword for democracy and we will stick with this principle come rain, come sunshine. The Nigerian people are resolved that Never again will we allow anybody to steal our votes no matter how highly placed or else they should be prepared to face the masses wrath.

A word is enough for the wise.

(Ekujumi Is The Executive Chairman, Committee For The Protection Of Peoples Mandate (CPPM))

Posted by PublicInformationProjects at 03:15 No comments: