We wish to publicly offer our profound appreciation for your unprecedented recognition of the late Chief MKO Abiola, the ideals he lived by and the noble cause he died for. As you honoured him, we honour you.

We have watched in dismay and bafflement, the futile efforts of previous governments to bury the uncommon heroism of MKO Abiola. While looking ahead to your plans to shepherd this nation, you looked behind to acknowledge those you paved the path you now tread. Many sing by rote, the words "the labour of our heroes past shall never be in vain" while you embody that principle. Your labour over our country will never be in vain, by the grace of the Almighty Allah.

As our leader, you chose the time and manner that you would honour this great Nigerian. It was without our input but with our full approval. His sacrifices and contributions across every sphere of public life are too numerous to list. There has never been a philanthropist on the scale of MKO Abiola in the history of Nigeria. His oft-repeated life's ambition was to touch the life of every Nigerian one way or another. He may have succeeded in the area of education alone. In March 1990, he donated N1m (equivalent of N40 million in 2010) to each State University, N50,000 (N2 million in 2010) to each Federal University for student welfare, N20,000 (N800,000 in 2010) to the libraries of each Federal University and N25,000 (N1 million in 2010) to each Polytechnic and College of Education. He is credited with the construction of 63 secondary schools and 41 libraries. He established Abiola Bookshops to provide affordable, locally produced textbooks in the 1980s when imported textbooks became out of the reach of ordinary Nigerians when the Naira was devalued. He awarded over 1,000 scholarships to deserving students in tertiary institutions at home and abroad. In addition those awarded by the Federal Government, MKO Abiola awarded bursaries to every single student from Ogun State. For every N500 they received from the Federal government, they received N250 from MKO Abiola. To delve into his contributions in sports, culture and welfare would turn this letter into a thesis.

In politics as in philanthropy, he is unequalled. He broke tribal and religious barriers to a clear victory. He chose the path of valour and fought for the collective will of Nigerians from the four corners of this nation and everywhere in between. He willingly returned from exile, knowing the consequences of that action, prepared to pay with his life. The circumstances of his death shook the polity to its foundations and established the democracy we enjoy today, by far the longest period of rule by the people in our history. He lost his wife, the late Alhaja Kudirat Abiola, his businesses were decimated yet he voluntarily stayed in detention, rejecting conditional release. He died refusing to betray the mandate given to him by those who betray his memory today.

No honour is too great for one of the men and women who laid down their lives for the democracy we enjoy today, that enables some to take to the streets, uttering irresponsible, abhorrent nonsense. We take a leaf from your book and illustrate the line "help our youth the truth to know". The government of Egypt named a school after him in appreciation of his contribution after a devastating earthquake. Egyptians did not take to the street yet to their eternal shame, some people in Lagos did. But as the great man would say, as one is crying one should still see. The machinations and motives of those sponsoring the protests are obvious. If thirteen years of deafening silence from the Federal Government built on the blood of this man could not diminish his legacy, the actions of a few hooligans and rascals with no sense of history will certainly not. All glory and honour reside in the hands of the Almighty Allah, a righteous judge. MKO Abiola will not be denied. We now turn to those groups who feel that their positions have been threatened by an unprecedented act of grace by Your Excellency and urge them to desist. The general elections are three years away. There is no need for blind panic or for using MKO Abiola's name and the larger issue of June 12th to score cheap political points against the ruling party. We urge them to focus on the task of national and regional development.

We assure you of our support of any decision you take in this matter. We had no expectation of your gracious gesture and neither did MKO Abiola. He was driven by his love for Nigeria, not by the anticipation of honours. The few words you spoke provided justice and peace. No “masthead” can ever do that. We are satisfied and we are appreciative. You have acted as one who fears God and seeks to lead in justice and truth according to His will. In the final analysis and in view of the fickleness and short memory of some “students”, that is all that matters. We conclude with the assurance that your honouree would not be disturbed by this furore were he alive to witness it. When we would tell him we don’t like his nickname of Father Christmas and ask him why he gives so much, he would say that he is not doing it for the people but for Allah and that if he helps a thousand people and only one remembers that’s enough for him. It is enough for us too as is the certain fact that in due course, each of us will go where MKO Abiola has gone and leave children behind. 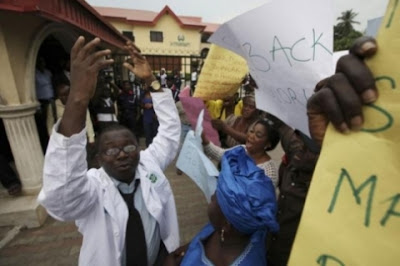 Posted by PublicInformationProjects at 11:13 No comments:

Posted by PublicInformationProjects at 11:02 No comments: