Simon Mwadkwon, member House of Representatives was however injured and is in a critical condition.

The incident have since been confirmed by The Plateau State  Commission of Information, Mr. Abraham Yiljap.
Posted by PublicInformationProjects at 12:40 No comments: 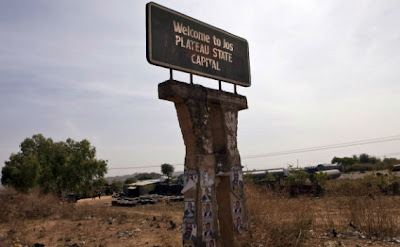 About thirty-seven persons are feared dead following raids and reprisal attacks between The Joint Task Force on Security (JTF) and militants yesterday in the suburbs of Jos, the capital city of Plateau State in Nigeria.

“A good number of people have been rendered homeless”, a JTF contact in Jos told chidi opara reports this morning on phone.

There has not been any official statement on the identity of the militant group(s), but there are speculations that they were of the Fulani ethnic stock.

The Plateau state capital city has been witnessing violence along ethnic and religious lines for some time now.

The state located in the North-Central region of Nigeria produces farm products like potatoes, corn and tomatoes sold across the nation.

Posted by PublicInformationProjects at 07:56 No comments: