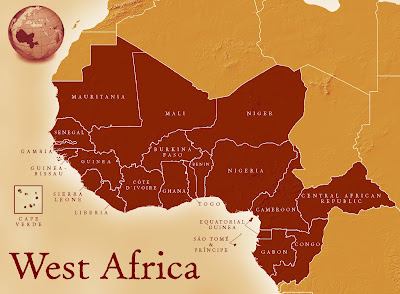 Mali, Niger and Ivory Coast have slashed or removed taxes on a range of imported basic foods as they try to contain rising food prices, which led to protests in a number of countries when they last spiked five years ago.

Grain prices hit record highs on international markets in July as drought scorched crops in the U.S. midwest and Russia, prompting the UN's Food and Agriculture Organization to warn that it was concerned about prices although it did not yet see a repeat of the 2007/08 crisis.

Russia's heatwave has fuelled speculation about export restrictions in the Black Sea producer, while U.S. corn and wheat prices at times rose by 50 percent in the last six weeks and remain close to highs.

High food prices sparked riots in countries such as Egypt, Cameroon and Haiti five years ago, although the UN has pointed out supplies of staple rice are more comfortable this time.

Global food price pressures come as many in West Africa celebrate the Muslim holy month of Ramadan, which traditionally drives up prices, and as a food crisis affecting some 18 million people across the Sahel peaks with the onset of annual rains.

"I know we are in a period of rising prices, especially when it comes to basic foods like sugar. But I call on businesses to respect promises that they made with the ministry of trade," Niger's President Mahamadou Issoufou said in a speech late on Thursday, referring to meetings between the government and traders last month.

Taxes Slashed:
Niger has removed all taxes on imported cereals but figures produced by the country's SIMA agricultural information index showed the price of cereals was 45 percent higher in July than during the same month last year.

Saley Saidou, the land-locked nation's trade minister, blamed failed rains in Niger and the high cost of transport from ports in nations to the south, as well as world prices for the increases.

Alarm is growing that an expected fall in U.S. grain exports could cause shortages and further jumps in prices worldwide.

Niger, a uranium-producing nation that straddles the south of the Sahara, saw street protests against the cost of living during the 2007-8 food price spike.

Neighbouring Mali, which is gripped by a political crisis in the south and whose northern desert zone is occupied by a range of Islamist forces, has slashed taxes on imported rice and sugar as it too seeks to keep prices under control.

Customs and value added tax on imported rice were reduced in May to a combined 2.5 percent, down from 31.28 percent. Meanwhile, the tax bill for sugar importers has been brought down from 105 percent to 2.5 percent.

The move is a welcome relief for a country seeking stability after a March coup precipitated the fall of the north to a mix of rebel forces.

"This year I was surprised to buy a kilogramme of sugar even cheaper than the price fixed by the authorities," said Moussa Doumbia, a stonemason. "Long may it continue."

Even top cocoa grower Ivory Coast, which with its ports is spared the same costs of transporting goods hundreds of kilometres north towards the Sahara but is still recovering from months of post-election violence last year, has been forced to act.

The government this week temporarily suspended all taxes on rice imports, estimated at some 900,000 tonnes a year, denying the government some 7 billion CFA in revenues.

"This decision was taken as the government wants to maintain the price of rice at a level that corresponds to the purchasing power of the Ivorian population," government spokesman Bruno Kone said after a cabinet meeting on Wednesday.

Posted by PublicInformationProjects at 12:26 No comments:

The investigation process into oil spills in the Niger Delta has been challenged today by Amnesty International and the Centre for Environment, Human Rights and Development (CEHRD), as inconsistencies in Shell’s claims about sabotage were revealed.

Experts have examined evidence from the latest oil spill from Shell’s poorly maintained pipelines in the Bodo creek area and confirmed that it strongly indicates that the leak is due to corrosion of the pipeline. However, Shell appears to be ignoring the evidence of corrosion.

“The investigation process into oil spills in the Niger Delta is a fiasco. There is more investment in public relations messaging than in facing up to the fact that much of the oil infrastructure is old, poorly maintained and prone to leaks – some of them devastating in terms of their human rights impact,” said Audrey Gaughran, Director of Global Issues at Amnesty International.

“No matter what evidence is presented to Shell about oil spills, they constantly hide behind the ‘sabotage’ excuse and dodge their responsibility for massive pollution that is due to their failure to properly maintain their infrastructure and make it safe, and to properly clean up oil spills.”

Amnesty International and CEHRD asked US company, Accufacts, which has many years experience in examining oil infrastructure, to examine photographs of the pipe at the leak point.  They stated: “This is apparently due to external corrosion.  Notice the layered loss of metal on the outside of the pipe around the "stick" from pipe wall loss (thinning) due to external corrosion.  It is a very familiar pattern that we have seen many times on other pipelines."

“Shell have said locally that the spill looks like sabotage, and they completely ignore the evidence of corrosion. This has generated a lot of confusion and some anger in the community,” said Stevyn Obodoekwe, Director of Programmes at CEHRD.  “We have seen the pipe and brought an expert to look at it, and it seems pretty clear it is corroded.”

When Amnesty International contacted Shell’s headquarters to ask for evidence to support the claim of sabotage in Bodo, Shell said the company has not claimed that the cause of the spill was sabotage and the joint investigation has not been completed. However Shell could not explain the statements made locally to the community.

Shell has claimed that the joint investigation team, which includes community members, the regulators, Shell staff and representatives of the police and Joint Task Force, was not able to complete the oil spill investigation because local youths threw stones at them. Witnesses on site say that they did not see any such incident and that the security services were present during investigation.

Shell will now remove the affected length of pipe to a Shell facility where, according to the company, tests will be done. The community and local environment and human rights activists are afraid that this process – totally under the control of Shell – lacks transparency and the outcome will not be credible.

Shell’s pipelines are old and many have not been properly maintained or replaced, with local people and NGOs reporting that the pipes in the Bodo area have not been replaced since 1958. When Amnesty International asked Shell to confirm the age and status of the pipes the company did not respond.

One year ago, the United Nations Environment Programme (UNEP) issued a major report on the effects of oil pollution in the Ogoniland region of the Niger Delta. Little has changed, as this latest oil spill at Bodo demonstrates. Among its findings, UNEP confirmed that Nigerian regulatory agencies “are at the mercy of oil companies when it comes to conducting site inspections”. UNEP also found that Shell had failed to adhere to its own standards in relation to maintaining its infrastructure.

“Years of bad practice with regard to oil spill investigations have left communities highly distrustful of the process and outcomes,” said Stevyn Obodoekwe. "Shell has never addressed evidence of bad practice in the oil spill investigation process, of which the situation at Bodo is one more example. Spills can be attributed to sabotage when they are in fact due to corrosion and Shell knows this has occurred in the past.”

late 1950s. Corrosion of the pipes and equipment failure were responsible for the majority of spills. In recent years sabotage, vandalism and theft of oil have also contributed to pollution. However, corrosion and equipment failure remain very serious problems which have never been addressed.

Oil companies are responsible for ensuring that, as far as possible, their equipment is not vulnerable to tampering. However, Shell has not responded to request to for information on any measures it has taken to prevent sabotage and vandalism.

On 3 August Amnesty International and CEHRD published a report on an oilinvestigation at Bodo in June/July 2012. The report focuses on the lack of transparency in the process and the failure of shell to disclose any information on the condition or age of its pipes.

Since 2011 Shell has posted oil spill investigation data on its website. This move was welcomed by Amnesty International and CEHRD.  However, as research by both organizations has made clear, the process on the ground remains highly problematic, and there is a lack of independence and transparency in the investigations themselves.