Posted by PublicInformationProjects at 10:47 No comments:

Nigeria is likely to be included in JP Morgan's Government Bond Index - Emerging Markets (GBI-EM) from October, potentially bringing up to $1 billion into one of Africa's most developed debt markets, the bank said on Wednesday.

The inclusion of the continent's top crude oil producer, which will become the second African constituent of the index after South Africa, will be phased over three months, from October 1 to December 3., JP Morgan said.

With around $170 billion of assets under management benchmarked against the index and given that Nigeria is expected to have a weight of 0.59 percent in the index by December 3, there could be over $1 billion flowing into its local bond market in the coming months, said Giulia Pellegrini, JP Morgan economist and strategist for Sub-Saharan Africa.

"This is a game-changer for the Nigerian bond market," she said. "With yields currently north of 16 percent, offering a hefty premium to the current GBI-EM Index yield of 5.8 percent, that estimate may well be revised to the upside as investors are attracted by the possibility to capture higher returns than in the other local markets in the index."

Inclusion in the index would also support the efforts of the Nigerian government to deepen the bond market, Pellegrini added. The total domestic debt stock is currently around $38 billion, including federal government bonds (accounting for $23 billion), as well as state government and corporate bonds.

"It raises the visibility of the Nigerian bond market on the international scene, placing what has been so far deemed a "frontier" market a step closer to more mainstream investment destinations," she said.

Three Nigerian bonds, maturing in 2014, 2019 and 2022, will be eligible for the GBI-EM as they are the most liquid, though the list may be subject to change depending on market conditions. Inclusion of more bonds in the index is possible in the future, Pellegrini said.

The move follows the announcement in April that South Africa would be included in Citi's World Government Bond Index in October. Citi estimates that up to $7.5 billion could flow into the country's bond market as a result.

Since April, foreign inflows have totalled $6.2 billion, though it is unclear how much of this is related to the WGBI, and yields on government bonds have fallen sharply.

While Nigeria's inclusion in the GBI-EM is not of the same magnitude as much larger funds are benchmarked against the WGBI it opens the country up to new foreign investors, said Leon Myburgh, sub-Saharan Africa strategist at Citi.

"It now becomes part of a major benchmark and this will force a number of investors who didn't previously look at Nigeria to look at it," he said. "Certainly, it will bring in new flows into the country which it wouldn't have seen otherwise."

Conditions Nigeria had to meet in order to qualify for the index include being classified as a low/upper-middle income country by the World Bank for at least two consecutive years, the availability of two-way daily pricing on its bonds, a sufficiently liquid local bond market and certain requirements relating to settlement.

The central bank's lifting of restrictions on foreign participation in the bond market last July also helped to facilitate the inclusion of government bonds in the index, Pellegrini said.

"It has removed a barrier to easy entry and exit of foreign investors in the local bond market," she said. "This has spurred renewed interest by foreigners, helping raise market liquidity in and enhance the profile of the local bond market on an international level."
Posted by PublicInformationProjects at 02:47 No comments:

Poem: Late To The Olympian Height 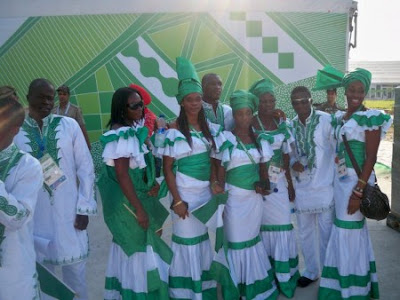 We set forth late
To the Olympian height
With excess luggage
Laddened,
We climbed with limbs
Made limp by no practice,
Our ears were filled
With praises of the mealy mouthed,
Inexperience gnawed
At our climbing rope.

Huff,
Huff
And huff we climbed
The Olympian height
Hoping for lift to the top
From the great gods.

Snap,
We crashed.
Posted by PublicInformationProjects at 02:15 No comments: