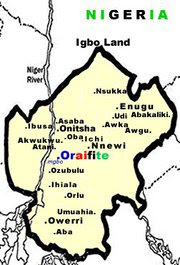 According to the statistics released, Ebony State has 77 percent unemployment rate, 69 percent illiteracy rate and poor job creation initiative, which has led to the pauperizing of over 60 percent of the people of the state.

The statement added that, “about 31 percent of the indigenes of Ebonyi state are merely educated, accounting for the high rate of crime and violent communal clashes which has left thousands of people dead. Ebonyi state has in the recent time recorded the worst form of political killings, land dispute-related crisis, thuggery and kidnapping”.

Imo State according to the statement has 71 percent unemployment rate, which it said was a result of the recent sack of 10,000 youths by the state government, adding that only  29 percent of the population of people in the state.

Anambra State came third with 63 percent unemployment rate while only 33 percent of the state’s population is employed, “63% of the population are mainly traders, artisans, Okada riders, mechanics, among other self employed individuals. Governor Peter Obi has not lifted embargo on employment six years after it was placed by the Chris Ngige administration”.

The CD hinted that the refusal of most of the state governors in the zone to conduct Local Government elections, thereby diverting the Federal Allocations accruing to the Council Areas, which ought to be plunged into establishing cottage industries and other empowerment programmes in the rural communities to create employment in the states.

In Abia state according to the research, despite the controversial sacking of non indigenes in the state civil service, only 31 percent of the population of the state is employed, while 63 percent of the people are unemployed and grappling with abject poverty and other challenges.

“The recent research by the CD to ascertain the unemployment rate in the Southeast zone, became imperative as a result of the mounting insecurity in the zone, which we have discovered was a result of large scale unemployment, which has brought untold hardship on the people, especially youths, who have resulted to kidnapping and other forms of criminality to meet daily economic challenges”, the statement informed.
Posted by PublicInformationProjects at 11:30 No comments: