Report By: Dede Uzor A. Uzor

The Campaign for Democracy (CD), South-East Region has commended South-East boss of the National Agency for Prohibition of Traffic in Persons and Other Related Matters (NAPTIP) for bringing justice to maltreated house-help, little Miss Chinenye Emeka (13) after she was bruised with electric hot iron on her buttocks.
It would be recalled that Mrs Ifechukwu Akabekwa a resident of 7 Abazuonu Street in Iyi-Owa Odekpe inflicted the bodily injuries on Miss Emeka after the girl used N1,000 given to her by a philanthropist to pay her school fees without the permission of Akabekwa about two months ago.
The matter, which the Campaign for Democracy (CD), South-East Region took up against Akabekwa, was still in Atani Chief Magistrate Court after she spent three days in Onitsha Prisons for maltreating Miss Emeka.
This was contained in a statement issued to newsmen on Tuesday.
The statement was signed by Dede Uzor A. Uzor, Chairman of CD South-East Region.
``CD lauds the efforts of Mrs Nkiru Micheal, Co-ordinator of NAPTIP, South-East for coming to the aid of the helpless house-help,   Miss Chinenye Emeka, who was given an inhuman treatment any mother who not attempt do to her child.
``We would also commend her doggedness in seeing the perpetrator (Mrs Akabekwa) is brought to book as well as rescuing of three under-aged pregnant girls in Owerri-Onitsha Road in August.
``And recently, NAPTIP arrested a woman who had been maltreating her house-maid at 3-3 Onitsha and another in Oguta in Imo State.
``Also, sensitization and education against child labour in Ebonyi State, where they were serving terms of hard-labour of breaking concrete stones among other,’’ it said.
The statement, however, urged the Federal Government through the NAPTIP national headquarters to provide her with more logistics in terms of vehicles and personnel.
``While she should be promoted for being honest, forthright and diligent in the discharge of her duties within the zone,’’ it said.
Posted by PublicInformationProjects at 11:51 No comments: 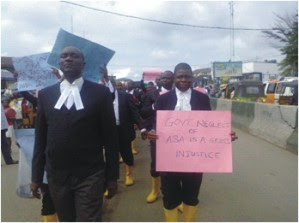 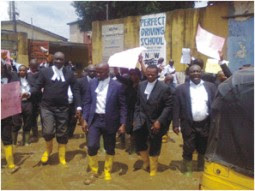 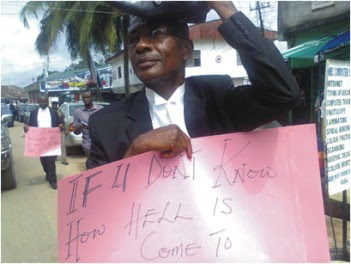 Posted by PublicInformationProjects at 11:28 No comments:

News Release: Justice Sophia A. B. Akuffo Elected President Of The African Court


On Tuesday, 18 September 2012, Justice Sophia A. B. Akuffo (Ghana) was elected President of the African Court on Human and Peoples’ Rights for a two-year term.

Judge of the Supreme Court of Ghana and a member of several organizations, including the Advisory Committee of the Commonwealth Judicial Education Institute. Justice Sophia A. B. Akuffo replaces Justice Gérard Niyungeko (Burundi) who served as the first President of the Court (2006-2008). Justice Niyungeko was reelected for a second time as President of the African Court for the period 2010-2012.

Released By: Information And Communication Arm
Posted by PublicInformationProjects at 01:45 No comments:

A Coalition of Human Rights and Pro-Democracy organizations under the umbrella of South-East Development Agenda has commended the Nigerian Bar Association Aba Chapter for their End Impunity Rally held on Tuesday 18th of September 2012  against the unpopular and non performing government of Chief T.A.Orji led Government.

In a statement signed by the representative of the coalition; Comrade Godson Ibekwe Umelo and Comrade Nelson Nnanna Nwafor, the group stressed that though the rally was welcomed development, it has been long overdue. According to the coalition, the NBA Aba Chapter is considered as a progressive entity which ought to have been leading in the ongoing crusade by the civil society organizations in the State to end this government of impunity which manifests in form of decay of roads in Aba, Double and illegal taxation, infrastructure levies, harassment and intimidation of innocent and law abiding citizens with opposing views on  state government's anti-people policies.

The coalition condemned the non implementation of the state 2012 budgets as fiscal indiscipline and irresponsibility by the Chief T.A.Orji led government.

The coalition therefore called for immediate impeachment of the governor by the state house of Assembly for gross misconduct, abuse of office and a breach of the 1999 constitution as amended which he swear to uphold and protect.

The coalition has already concluded plans to take the state government to court over illegal fees and intimation of innocent citizens who feel agitated by the anti people policies of the government, and called on all human rights and progressive forces in the state to join forces with the coalition to end this decade of impunity in the state.
Posted by PublicInformationProjects at 01:34 No comments: