Nigeria has suspended flights to Saudi Arabia for the annual haj pilgrimage, following a diplomatic spat over the detention of hundreds of female pilgrims for arriving unaccompanied by men.

Saudi authorities have deported more than 600 female Nigerian pilgrims and detained hundreds for trying to visit the holy city of Mecca without male relatives.

Aminu Tambuwal, Nigeria's parliament speaker and the second most powerful Muslim in the government, was due to visit Saudi Arabia on Friday to try to resolve the spat.

"The airlift operations have been temporary stopped ... It does not make sense to airlift people to be detained on landing. We will resume when all outstanding issues are resolved," Uba Mana, spokesman of National Hajj Commission, said by telephone.

Women in Saudi Arabia are regarded as minors and require the permission of their guardian - father, brother, or husband - to leave the country, receive some kinds of medical treatment or work. They are not allowed to drive and are usually expected to be accompanied by a male chaperone.

"The Nigerian pilgrims came with their visas stating that they have to have a male guardian accompanying them, either a brother, a husband, or another relative," Saudi Haj Ministry spokesman Hatim Kadi said.

In Nigeria, where there are 80 Million Muslims, many practice a less restrictive form of Islam in which women are more or less free to move around as they like.

"I use this platform to plead with our compatriots, to leaders in Nigeria to be mindful of statements that we make on this issue so that we don't aggravate the situation," Tambuwal said late on Thursday.

All Muslims who are able are required to perform the haj at least once, as one of the five pillars of Islam.

Posted by PublicInformationProjects at 11:29 No comments: 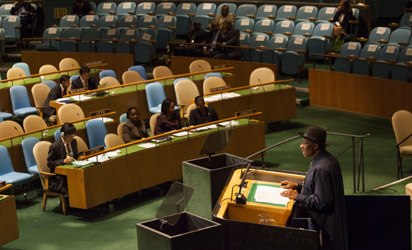 Posted by PublicInformationProjects at 11:15 No comments:

Posted by PublicInformationProjects at 02:42 No comments: