Posted by PublicInformationProjects at 10:48 No comments: 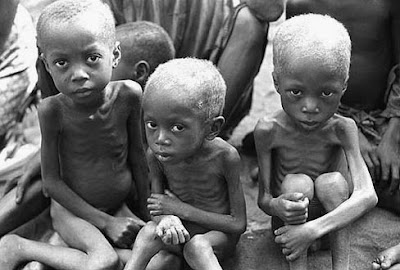 By: Chidi Anthony Opara
To their cousins cocooned
In blissful childhood
Iron birds brought bliss.
To children of Biafra
Forced into war,
Iron birds brought bombs.
Their limbs shrunk,
Their empty bellies bulge,
Their cheeks bloated with infirmities.
They were clothed
With coats of kwashiorkor.
They crawled
To care givers for rations,
Bombs continued
To mangle their kwashiokored bodies.
Architects of falsehoods
Are now reconstructing history,
Their cause
Is buried in the dept of debates.
From their graves
Children of Biafra hear
That they did not die.
Posted by PublicInformationProjects at 10:41 No comments:

Report By: African Union Directorate Of Information And Communication

The African Union (AU) will continue to do everything in its power to resolve the situation between Sudan and South Sudan, as well as that in Mali. African Union Commission Chairperson Dr Nkosazana Dlamini Zuma said this while addressing the 339th meeting of the AU’s Peace and Security Council (AUPSC) at Ministerial level, in Addis Ababa. On the situation in Darfur, the Chairperson said “There remain … critical outstanding matters relating to the determination of the final status of Abyei; the resolution of the status of the disputed and claimed border areas; and the resolution of the conflict in the Southern Kordofan and Blue Nile States of Sudan. The establishment of sustainable and cooperative relations between Sudan and South Sudan requires the final delineation of their common border, a decision on the future status of Abyei Area, as well as the peaceful resolution of internal conflicts within each state” the Chairperson said. In an effort to resolve the situation, the AU PSC adopted a roadmap for the resolution of the outstanding issues in the post-secession relations between the two countries. The roadmap was endorsed by the UN Security Council and other AU Partners, in a display of unity of views among the members of the international community. Within the context of these efforts, the AU engagement has taken many forms.

“We have convened talks to mediate between stakeholders. We have deployed Peacekeepers in order to ensure security and build confidence. We have mobilized African elder statesmen to lend a hand to the parties as they seek to end conflict and move these great African sisterly countries towards post-conflict reconstruction and sustainable development”, the Chairperson said.

These continental efforts are bearing fruit as witnessed by the signing, on 27 September 2012, of a series of agreements on post-secession relations, by Presidents Omar Hassan al-Bashir and Salva Kiir Mayardit, under the facilitation of the AU High-Level Implementation Panel.

“The AU will stand by them shoulder-by-shoulder” in the process of addressing the remaining issues”, added Dr Dlamini Zuma.

On the other hand, Mali is faced with overlapping crises i.e a serious crisis in its northern part, which is now occupied by armed terrorist and criminal groups; and the institutional crisis that arose as a result of the coup d’état of 22 March 2012. These crises constitute a serious threat to some of the core principles of the AU, particularly the principles of respecting the national unity and territorial integrity of Member States, and rejection of terrorism and transnational crimes.

In respect of the Malian crises, the AUC chairperson said the Union welcomed the formation of the Government of National Unity, last August. Dr Dlamini Zuma alsoreported that the Support and Follow-up Group held a high level meeting in Bamako, on 19 October 2012, to interact with the Malian authorities on the way forward, as well as to review the Draft Strategic Concept for the Resolution of the Crises in Mali, prepared by the AU Commission in consultation with the Malian authorities, ECOWAS, the UN, the EU and other international stakeholders. The Strategic Concept, which was developed as a follow-up to decisions by the AUPSC, articulates, in a holistic manner, the political, security, military and other measures that need to be taken to address the challenges at hand. A key outcome of that meeting was that the meeting in Bamako
welcomed the Draft Concept.

As a way forward, the Commission Chairperson said the AU is working with the Malian authorities, ECOWAS, the UN, the EU and other partners to finalize the joint planning for the early deployment of an African-led international force to help Mali recover the occupied territories in the North. At the same time, it will leave the door of dialogue open to those Malians willing to negotiate on the basis of a clear commitment to the respect of Mali’s unity, territorial integrity and rejection of links with terrorist and criminal groups.
Posted by PublicInformationProjects at 03:15 No comments: