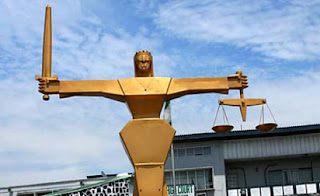 The Honourable Justice S.M Shuaibu of the Federal High Court one in Owerri Judicial division has adjourned the suits filed by pro-Biafra activists, Bilie Human Rights Initiative to the 26th of November, 2012.

The Cases could not be opened as scheduled for reasons that was not made clear at the time of preparing this report.

chidi opara reports however learned that by about 9.00am, the plaintiff's lawyers, Bilie Human Rights Initiatives officials and Biafra activists had massed at the Court premises.

Posted by PublicInformationProjects at 05:28 No comments:

Multiple suits(Nr.FHC/OW/CS/102/2012) have been filed by a new pro-Biafra organization against the Federal Government of Nigeria “for the Self-determination and Independence of Biafra” and “an order seeking restraint on the part of the Federal Government of Nigeria and her agents from the continued intimidation, harassment and threat to life of the publishers and distributors of Eastern Pilot Newspaper and violation of the publication’s freedom of expression as guaranteed under the constitution of the Federal Republic of Nigeria”.

Hearing on the suits open today at the Federal High Court of Nigeria in the Owerri Judicial Division. Owerri is the capital city of Imo State, one of the states in South-Eastern Nigeria.

The organization, Bilie Human Rights Initiative with headquarters in Owerri, claims in its membership form obtained by chidi opara reports to be "a human rights organization advocating for the rights of the indegenous people of Biafra by the rule of law".

It claims further to be "registered by the United Nations and the Federal Government of Nigeria to advocate for the rights of the indigenous peoples which includes their right of self-determination and the control of their natural resources under the United Nations charter and the African charter on human and peoples rights".

Secretary-general of Bilie Human Rights Initiative, Mr. Eddy Anyanwu told chidi opara reports on phone earlier today that "there would be a world news conference later today".
Posted by PublicInformationProjects at 02:02 No comments: 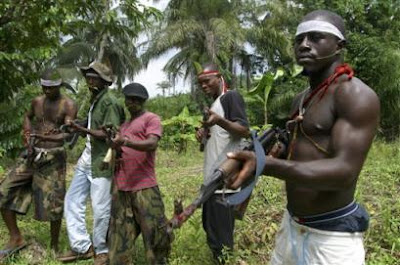 There has been a long silence MEND and its affiliated groups for a while now. Is the Niger Delta struggle still on course?

The Joint Revolutionary Council (JRC) is not a MEND affiliated group. Rather MEND is a loose affiliate of the JRC. You will notice in all our communications that we continue to pay reverence to the likes of Alhaji Mujahid Dokubo-Asari, Government Ekpemukpolo (aka Tompolo) and Ebikabowei Victor Ben (aka Boyloaf). That should tell you that in spite of what you see or think, these people play strong roles in managing the affairs for the liberation and emancipation of the Niger Delta and we recognize the roles they play within the hierarchy of the JRC.

Are the people of the Niger Delta in full agreement with the leadership and Presidency of Dr Goodluck Ebele Jonathan, President of the Federal Republic of Nigeria?

Dr Goodluck Jonathan is President of the Nigerian state. The Ijaw and Niger Delta territory is an occupied territory with the Nigerian state. An Ijaw son being President does not necessarily translate into redemption and liberation from poverty, squalor and environmental degradation for the people of the Niger Delta because the forces of evil and wickedness that have worked to suppress the people of the Niger Delta are still at work today working round the clock to undermine the Jonathan Presidency. They will fail.

We pity anyone who emerges from the North as President in the years to come. He may have to contend with a politically tainted Niger Delta agitation.

The Federal Government has recently Okayed the addition of more than three thousand ex-militants into the Presidential Amnesty Programme. Does the JRC endorse such a move?

The Presidential Amnesty Programme is an interventionist therapy and while we concede on its success, we will not fail to point out that the Federal Government is failing in the areas of infrastructural development in the Niger Delta. East-West road is yet to be completed and is currently in a very bad flooded shape. A segment of the Niger Delta has literally been cut off from other parts.

The Head of the Presidential Amnesty Programme is a former spokesman of the Ijaw Youth Council (IYC) and frontline Ijaw youth leader. He has no choice but to perform and do his job well. He has access to critical agitating centers and is known to be accessible. We wish him well but even he himself knows that amnesty without infrastructural development will lead us nowhere no matter how well he does his job.

More importantly, the Nigerian state must give to Caesar, that which belongs to Caesar. The Niger Delta and its constituent units deserve a better deal if we must remain within this contraption called Nigeria. This explains why we support the call for a Sovereign National Conference.

There is no explanation why the East-West road has not been completed up to this time. The Niger Delta and its people account for more than 96% of the foreign exchange of the Nigerian state! How can you take the monies of the people of the Niger Delta and use it to build infrastructure in other lands when the land and people of the region rest on decrepit infrastructure?

Feasibility studies on the Niger Delta Coastal Road has been successfully completed by an indigenous Niger Delta consulting company but no body is talking about constructing the road now even as the consultant has not even been completely paid.

Instead, the Federal Ministry of Works is talking about a bogus Golden Triangle road network that is of no strategic relevance to the people of the Niger Delta. We expect billions of naira to be spent on testing the viability of this bogus road network before it is eventually abandoned.

While billions of dollars is being spent on the Lagos-Kano rail link, no one is hearing anything about the Lagos-Calabar rail link! Yet oil is being pumped daily from the Niger Delta and our people remain calm because a son of the Niger Delta is President. That may not continue for long. Our tolerance limits are being tested. It will not be long before a break point will be established.

Our lands are being continually polluted and degraded while we sit in our flooded lands and water-overran houses.

The Ogoni land pollution issue is yet to be fully resolved. While the Nigerian state reaped billions of dollars from Ogoni land and used it to develop infrastructure in other lands such as Abuja, the people of Ogoni land were left to suffer the demeaning consequences of a devastating ecological situation. How long should we allow that continue?

What is the position of the JRC on the Nigerian Budget and how it affects the improvement of the lives of the people of the Niger Delta?

The Niger Delta territory currently accounts for the survival of the Nigerian state yet only a scanty allocation is provided to ensure that the people of the region live a good life and access convenient infrastructure.

States that produce literally nothing now suddenly seek to enjoy a larger largesse from oil revenues. They have become so daring that a Governor of state such as Kano State within the Nigerian state will demand to have a portion of offshore oil revenues!...even when insurgents in his state are killing southern people. Can you imagine this? Do we now see why a Sovereign National Conference must be convened as soon as possible?

With all its wealth, there is no world-class airport or seaport in the Niger Delta.

In the past few decades, the people of the Niger Delta sat still while our resources were shared amongst the Indimis, the Mai Deribes, the Dantatas, Babangidas, Atikus, Dangotes, Rilwanu Lukmans etc! This is unacceptable!!

The time will soon come and it will not be long.