Article: Darkness In The Heartland

Thousands of years ago, Isaiah the son of Amoz saw vision concerning Judah and Jerusalem in the days of Uzziah, Jotham, Ahaz, and Hezekiah, kings of Judah. In one of his pronouncements he declared, “Behold, darkness shall cover the earth, and dense darkness all people”. Isaiah in this quote may have declared it over Judah and Jerusalem but this seems to have transcended that generation. It looked like he had the ‘Heartland’ in mind when he was making that pronouncement back in the days.

The ‘Heartland’, a creation of the military in 1976 along with others, was previously part of the East Central State. The area which is predominantly Christians covers an area of around 5,100sqkm. It is very rich in natural resources including crude oil, natural gas, lead, zinc, with economically exploitable flora like the iroko, mahogany, obeche, bamboo, rubber tree and oil palm. However, with a high population density and over farming the soil has been degraded and much of the native vegetation has disappeared.

It is not in doubt that this area produces the largest number of candidates for any examination in this part of the world. If not in the spirit of federal character or quota system it can afford to fill the whole spaces in the number of candidates to enter for both secondary and tertiary admission in schools. It can therefore boast of producing sound and educated minds in different fields of endeavour, or the best around. It can also boast of producing the most highly travelled sets of people in this part of the world; they are found in every corner of the earth.

Based on the above mentioned, it is expected that the ‘Heartland’ would be far and above others in terms of exposure and development. But the contrary is true based on the available indices. If human and natural resources are anything to go by, it should be spearheading moves towards the betterment of the well being of the people in this clime. Instead, it is trailing behind sluggishly and backward in everything good or meaningful development. What then is the benefit of education and exposure if the ‘Heartland’ is trailing others behind while it should be leading the way in positivism?

You must agree with me that the ‘Heartland’ is a ‘dynamic place’, for ‘dynamic people’, and made up of ‘dynamic people’. All who had come to administer the affairs of the place left it for dead. But for ‘Dede Onunaka’, all (military and civilian) administrators made sure they left it worse than they met it. All that could be felt were either sold or liquidated. The Amaraku power station, The Statesman, Progress Bank, Ada Palm, Concorde Hotel and many more were either sold or brought to their knees. And the thick darkness persisted all these years with not even a torchlight or candlelight anywhere near the
corner.

In the not too distant past, the one popularly known as ‘Onwa’ looked at the sorry state of things and the myriad of problems that did not seem to have solutions and arrived at a conclusion. He concluded that there is a very big ditch in the ‘Heartland’. And this ditch cannot be filled no matter how much you try with the ‘meager’ resources available to throw into it. So for eight years the aforementioned ditch could not be closed up and he did throw up his hands in surrender. It was then the turn of others to continue the bid to close this ditch of darkness.

Many are quick to submit that the darkness persisted because the ‘Heartland” became a haven of fraudsters and con-men. It meant that the ones who administered the affairs of the place were con-men, their stooges, associates or friends, whether in khaki or ‘akwa ishi agu’. Some others blamed it on the corrupt civil service who are the ones always left behind whenever those at the helm of affairs are booted out. I may be tempted to believe the above mentioned as the likely agents of this gross darkness but still have to hold my peace.

There is another ‘unique’ side of the ‘Heartland’. Credit must be given to them that they are very ‘unique’ specie. The highest number of autonomous communities in the whole of Africa is domiciled in the ‘Heartland’. As the autonomous communities multiply so do traditional rulers and tussle for traditional stools. What are the qualifications? You just need to be an ‘enterprising’ young man, have the capacity to go to China or Dubai to import fake and substandard goods, or containers of adulterated drugs, acquire one or two cars (fairly used quite often) build a small house in the village, be bold enough to cause confusion and division in your town meeting, confront your traditional ruler ceaselessly (without cause or on infinitesimal issues), then bolt and apply to have your own autonomous community and one is guaranteed. It’s that simple only there!

Aside the fact that they have a penchant for investing outside their home (okamma na ama syndrome), they resist change with all they’ve got. They are a people not easy to please. Sometimes I wonder whether they enjoy backwardness and lack of development. They are heavy noise makers with their ‘big’ names but not impact. If you hear the ‘big’ names, and dare follow them down to their village you will be shocked. In most cases, you have to transverse valleys, gullies, dusty roads and inaccessible paths to get to their ‘country homes’. Most prefer buying SUVs to putting the roads leading to their place in good shape. They pride in intimidating their people with their coins just to show off. What a people!

When a people are so used to darkness, it becomes difficult to appreciate light. It is said that darkness disappears at the emergence of light but it is almost looking like it is not true in the ‘Heartland’. May be because the darkness is very thick. But they truly need emancipation from this sorry state. And it would require a personality who is not homogeneous specie to bring light and liberty. Many souls have been bestirred to push for emancipation and change but they have many negative forces to contend with. And it would not come cheap because of the fact that change would denude several forces (internal and external forces) of their influence and vested interest.

As much as the roused souls yearn for light, the proponents of darkness would not want anything to change the status quo. The agents of darkness are obeying the law of attraction and have found a common cover under the ‘Big Umbrella’. Under their cover they concoct and conjure all manner of things to make sure they do not lose their big enclave. They snipe at any move and anybody that looks like the harbinger of illumination. But like in every contest, there must be winners and losers. And the winners must be the ones who want it so bad, more committed, and resolute in their bid.

About eighteen months ago, the voices and souls craving for change and the light got divine attention. It was declared, “Arise o Heartland and shine for your light has come and divine glory is risen upon you”.
Many who heard this divine declaration did not take it with any pinch of salt because of the densely massed darkness and the ossification of the machinations of the proponents of darkness. As the saying, “impossible is nothing” so was the declaration to some optimists. They hung to it and started navigating in the direction of the said harbinger of illumination. The enormity of the hurdles on the way to light never deterred these souls who earnestly desired departure from the past. So they rolled up their sleeves to confront the nefarious monster.

This team of determined people’s army nicknamed their operation, The Rescue Mission. Rescue Mission indeed! They really needed to reclaim the ‘Heartland’ from the forces of evil, darkness and backwardness. But they must dislodge the forces that aggregated under the ‘Big’ collapsible shade, the incumbent emperor that can hardly lose grip of anything in his domain, the ghost workers that milk the system dry, pot bellied contractors who do nothing but get paid, godfathers, pseudo ‘elder statesmen’, political traditional rulers, prayer contractors, and a host of other proponents of darkness. Like in a very tough football encounter, the team was declared victorious not in the regulation time, but after extra time and penalties by the heavily guarded umpire or referee.

The team has gone to work in their bid to salvage all the sectors. But like the proverbial tortoise that was left in the pit latrine for a long while until help came, they are now complaining about the stench; they want emergency exit. Some are complaining again that so much is going on at the same time and fear they might be abandoned. Others fault how the change is taking place; expecting business as usual in the name of due process. They forget too quickly that it is sheer insanity to keep doing the same thing the same way while expecting different result. The illumination is gradually but surely spreading in the Heartland that used to be obscure but the dark forces are not happy with the latest development. It is expected any way because denuding them is ‘costly’ as their bankers are not smiling at this time. But the truth is that darkness must be expunged so that the ‘Heartland’ can distance completely from retrogression and retarded development. The time to move forward and lead the way is now o Heartland!

News Release: Ki-moon To Obama; “Many Challenges Lie Ahead" 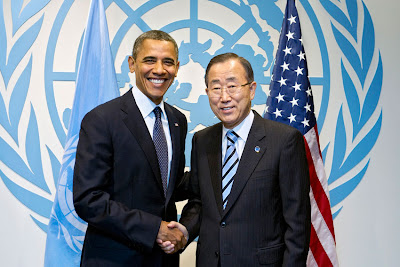 The Secretary-General warmly congratulates President Barack Obama on his re-election as President of the United States.

The Secretary-General looks forward to continuing to work with President Obama and his administration in the spirit of the enduring partnership between the United States and the United Nations.

Many challenges lie ahead, from ending the bloodshed in Syria, to getting the Middle East peace process back on track, to promoting sustainable development and tackling the challenges posed by climate change. All will require strong multilateral cooperation.

The Secretary-General and the United Nations will continue to count on the active engagement of the United States on these and other crucial issues as it strives to meet the hopes and  expectations of people around the world.

Martin Nesirky
Spokesperson For The Secretary-General
Posted by PublicInformationProjects at 03:14 No comments:


Posted by PublicInformationProjects at 01:50 No comments:

Posted by PublicInformationProjects at 01:24 No comments: