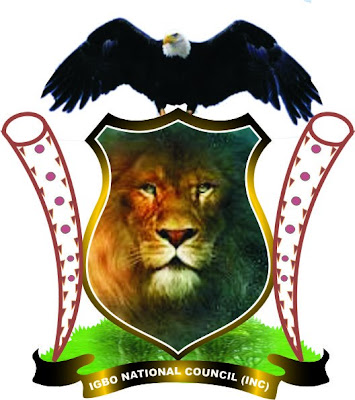 The Igbo National Council (INC), after extensive deliberation during its National Working Committee (NWC) meeting that was held in Owerri Imo State to discuss on the state of Ndi-Igbo and the Nigeria Nation, the Council frowned on the pitiable state of affairs in the country, and states as follows:

1. The Council decries the slow pace of development and the state of insecurity in the country coupled with the on going Constitutional confusion currently encircling the polity.

2. The Council condemned in its entirety, the poor state of economy in the country and finds it disturbing that the members of Igbo race live below poverty line and are at the ebb of most indices of economic development including high level of unemployment, low income level, high level of poverty and hunger, high dependency ration, poor medical facilities, poor and expensive educational and literacy provisions, low level of food production. The INC calls on Governments at all levels to be up and doing with efforts to uplift the standard of living of the people.

3.The Council called on the Government of Rivers State to stop wastage of public funds on unnecessary and  white elephant Projects like the Monorail project which has gulped over seventy-six billion naira (N76 bn) and which construction has so far lasted a period of over 5 years and yet, has not reached a distance of 2 kilometers. Thus the project does not and will not serve the present needs of the people of the Rivers State. The finances being wasted on such projects could be spent properly on many other meaningful infrastructures that will contribute to the well being of the people of the state. The INC therefore calls on government Rivers States to begin the review of those projects that dose not directly impact on the life of the people or improving the living condition of the citizens.

4. The Council decried the high level of brain-drain and human capital flight that has been going on in Igboland since the end of the Biafra-Nigeria Civil war. The Council noted that Igbo professionals and people have relocated to other parts of the country and parts of the world  in order to  make ends meet. Consequently, in spite of the large number of medical personnel, legal luminaries, administrative officers, academic personnel, engineers and other professionals so far produced by Ndigbo, the Igboland remains bereft of experts to take care of her affairs. The INC insists that the Governments of Igbo States must begin to deliberately formulate policies that will improve the condition of living of Ndi-Igbo in order to retain the caliber of experts and professionals that will contribute to the good of the land.

5.The Council maintained that Ndigbo needs re-orientation to enable them overcome the current socio-economic and political challenges facing the Igbo Race. The INC observes that there is a need to re-orientate Ndigbo against such negative syndromes as the belief and affirmation that: Ndigbo are wicked; Ndigbo are cheats; Ndigbo are politically weak; Ndigbo are disunited or cannot work as one people or in one mind; and many other similar and negative remarks.

Positive values for which the Nd-pIgbo was known should be promoted, taught and encouraged at all level of our levels of our development. Such values include: Igwe bu ike (Synergy is power); Agbata obi onye bu nwa nne ya (Ones neighbours, are the siblings he has around); Anyukoo mmamiri onu, ya gboo ufufu (Synergy produces greater result); Igbo bu Eze (Igbo is the King); Bunu bunu, ibu anyi danda (together, there is no load too heavy for the little white ants to carry); Etc

6.The Council condemned in its totality, all anti-Igbo policies: observed in the different segments of Ministries, Departments and Agencies (MDA’s) of the Federal Government of Nigeria, Some of these discriminatory polices exist in: Nigerian Shipping Council (NSC); National Maritime Administration and Safety Agency; Federal Aviation Authority of Nigeria (FAAN); National Petroleum Investment Management Services (NAPIMS); to mention but few.

7.On The Igbo Landing Project: The INC supports the Igbo Landing Project initiated by Prof. Catherine Acholonu to resettle black Americans who have traced their origin to Igboland through DNA tests etc. The INC calls on all people and Governments of the Igboland to support the project to enable it succeed. The INC praises the reception so far accorded the project by Akwa-Ibom and Cross Rivers State Governments and advises Governments of other Igbo States to emulate Akwa-Ibom and Cross River State governments.

8.The Council Calls on Governor Rochas Okorocha to employ more humane and realistic approach in making policies affecting citizens of the state and to avoid politicizing issues of development etc. The Council condemned in its totality, the purported dissolution of Town Union Government and the planned elections into the controversial Committee Governing Council (CGC) by the Imo State Government. The Council observes that the decision has crumbled activities at the committee levels.

9.Nollywood Movies: The Council observes that while the Hausa and Yoruba film makers create movies that promote their language and culture, Many Igbo film makers have continued to create movies performed in English language most of which condemn, caricature, mock and demonize Igbo culture. The INC advises Nollywood members of Igbo extraction to begin to create movies which will promote Igbo language and culture so as to contribute more positively to the development of Igboland.

In view of the above, the Council called on DSTV and other Nigeria based satellite television operators to create an Igbo Channel or face total boycott by Igbo viewers.

Posted by PublicInformationProjects at 01:03 No comments: