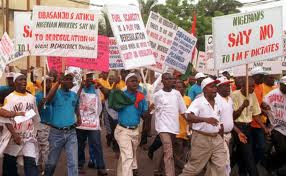 I have no doubt in my mind that the single most significant, most relevant, most historically decisive, and most impactful process and event of the year 2012 is the January Uprising, and the Occupy Nigeria Movement spawned in its wake and which terrified the regime in particular and the thieving, light fingered treasury looting class in general throughout the year.

But before we go any further let me explain some concepts in the paragraph above. The January Uprising refers to our spectacular and historic mass mobilisation of popular anger and dissent which was triggered by the unconscionable hiking of fuel prices in January. Triggered by the fuel price hike, but prepared by decades of pillaging and treasury looting that left the country desolate, its citizens impoverished and alienated, and its future left hanging in the balance. So yes the unprecedented hike in fuel prices, and the level of unbridled arrogance that went into the implementation of that policy [of punishing the victim to assuage the victimizer] brought the anger in us all and made it possible for the arduous process of awareness raising and mobilisation of the previous six months to flower and bear fruit in the massive popular uprising, which saw the collective mass direct action of millions of Nigerians across more than 55 cities and towns, and sustained over more than 10 days of continuous and ceaseless agitation. This was the January Uprising!

The Occupy Nigeria Movement spawned by it on the other include the several new and emergent organisations and coalitions, beyond the boundaries of the Labour –Civil Society Coalition [LASCO – NLC, TUC, UAD & JAF] which had provided central leadership and coordination preparatory to and during the Uprising. This movement is in essence a movement of movements, who unconsciously gravitated towards close collaboration during the uprising; but which has remained a loose confederation of more or less independent movements, each organising their own follow up actions all through 2012. This Occupy Nigeria Movement is a generic movement, and cannot be equated with the various groups that have since adopted that name.

Karl Marx once wrote that ‘a spectra haunts Europe, the spectra of communism’. In similar version, ‘there was in 2012, a spectra which haunted the Nigerian treasury looting ruling class, and its current regime; the spectre of the January Uprising and the Occupy Nigeria Movement spawned by it’. The few of the January Uprising, and a possible repeat of it became the beginning of wisdom for the ruling class and its regime. This explains why they were forced and compelled to stumble from one mega revelation of corruption to another; and to accompany these with contradictory steps and actions, taking in Lenin’s words each time, ‘one step forward and two steps backwards’.

Beyond 2012……
2012 was the year in which we stood our ground, planted our feet firmly on the ground and insisted that ‘Enough is Enough’.  This stance characterised and drove the January Uprising, but it has also characterized the blossoming of dissent, the flowering of informed criticism of bad governance, and the groundswell of numerous acts of mass defiance which has defined our country’s landscape since the Uprising.

For it is impossible for us to liberate this country and achieve our social emancipation relying on the platforms, structures, and parties of this treacherous light fingered treasury looting ruling elites. Whether they are in government at any level or in opposition, they are the same and identical. And let us not be fooled by labels such as progressives or conservatives; with the Nigeria ruling class these labels share identical common denominators – ProgressThieves and ConServaThieves!

I am aware that there are quite a number of more or less genuine efforts that are ongoing at building such alternative party platforms. And this is good, in the words of Mao, ‘let a thousand flowers bloom’. However, if we are ever going to have any chance of upstaging the ruling class and its parties, at some point, there will need to be concluded and evolved an alliance, electoral, political alliance of all these initiatives in order to conclude a United Front Movement Party, powerful enough to challenge and upstage the ruling class parties.
A United Front Movement Party that is that incorporates all these various initiatives either dissolved into it or affiliated with it.

The underlying minimum condition is that such a movement party must be one oriented on radical social transformation and the social emancipation of the exploited and subordinate classes.
Posted by PublicInformationProjects at 09:50 No comments: