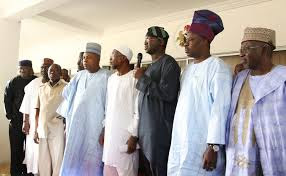 
Is it true that the position of the PGF as contained in the Lafia Communique translate to opposition to Local Government autonomy? What really constitute Local Government autonomy?
The truth is that the current debate around Local Government autonomy in the country is centrally focused on issues of management of local government share from the federation account especially bordering on the existence of joint accounts. The general perception therefore is that local government autonomy is encumbered by the existence of joint account because revenue of local governments get appropriated by state governments. To the extent of this perception, the dominant psychology in the country is that all Governors are guilty across all political parties. It is important that we really broaden the debate so that we don't oversimplify a complex national problem. Do we even want to debate or we should just resigned and accept what is adjudged as popular and representing "over 80%" of the views of Nigerians? Should popular opinion mean the end of debate? Assuming for instance PGF emerged from the Lafia meeting with a blanket endorsement of local government autonomy however defined, will that then clear the progressive governors of the guilt surrounding the management of Local Government revenue from the federation account if the joint account is abolished? What would that have meant in practical terms regarding the workings of our Local Governments? Certainly, it will mean more money to Local Governments from the Federation Accounts on accounts of which citizens can have higher expectations of development. The reality is that as Nigerians we are all frustrated by the crisis of governance generally but more specifically how governance at local levels is made insignificant and reduced to a conduit through which public resources are diverted. Understandably, Nigerians are desirous of a radically urgent solution.  The point is that current provisions of the 1999 constitution allows for some degree of Local Government autonomy with clear executive and legislative functions with the Fourth Schedule unambiguously outlining their powers. No doubt really Local Government operations is far below public expectations but the hard truth is that the failure of our Local Governments is a function of inability to give practical expressions to the provisions of Fourth Schedule. The argument as contained in the PGF Communique therefore is highlighting the strength of current provisions of the 1999 constitution as contained in Fourth Schedule and that the debate about strengthening Local Government autonomy should be properly focused to make Local Governments more effective in the discharge of their functions, which is a function of strengthening lower levels legislations to give effects to provisions of Fourth Schedule of the 1999 constitution. To base the debate centrally around the issue of management of revenue from the Federation Account is narrow and misleading.  Reading the way this matter is being interpreted, one is worried that mischief and blackmail is being used to silence any contrary view. I wish our media have adopted an investigative disposition in the way Abdul Mahmud argued that "I don't see how the present or proposed constitutional arrangement tilts our federation towards a unitary state".  One would have been more encouraged to respond by highlighting that the logic of PGF position aimed at entrenching the principles of subsidiarity whereby a central authority should have a subsidiary function, performing only those tasks which cannot be performed effectively at a more immediate or local level. It is one of the features of federalism, where it asserts the rights of the parts over the whole. The logic is that our Constitution makes good provisions for Local Government autonomy, which unfortunately due to combinations of poor administration and lack of competence at Local Government levels have impede efficient and effective service delivery, which should have produced good revenue base. Current national debate and the unfortunate resort to simplistic interpretation of the PGF position is not about producing good revenue base for Local Governments but about cheap access to oil revenue. The PGF position is for autonomy driven by principles of subsidiarity being the recognized international best practice for all federations in the world. As democrats and Nigerians committed to vibrant, fair and informed debate as basis of national development, our progressive governors are convinced that what is required is not just simple for or against discussions on matters like this but being able to project capacity for tolerance, accommodation and above respect all views as basis for contestation. APC, being the platform of the progressive governors will simply be founded with the endemic PDP consensus virus if it concede to so-called popular opinion without the courage to express the views of its members. In any event, being leaders committed to moving Nigeria forward, it is also incumbent that our governors are able to lead the process of provoking national debate in a matter as dear as Local Government autonomy. The question is whether Nigerians want to engage in debate or simply intimidate everyone into silence based on a claim to popular opinion. As civil society actors and leaders we need to summon the courage to welcome the position of PGF as an invitation to broaden the national debate and not mischievously present it as opposition to Local Government autonomy.