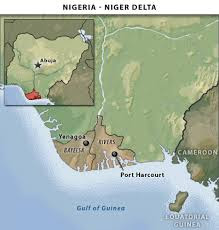 Given the subject and issue that I intend to write about in this piece; taken together with my name; it is important to make some urgently needed clarifications right at the start!

Inspite of the sound of my name, or maybe because of it, I am by the sweat, blood, sacrifice of our collective struggle, from the Niger Delta! I was privy to, directly involved in, and at the very heart of the struggle of the peoples’ of the Niger Delta for Resource Control and Self Determination from the 90s of the 20th century onwards! So I know what I am writing about!

At this point in the collective history of both the Niger Delta, and the Nigeria ‘Federation’ of which it is now a part, it is important, instructive, and decisive that we ask ourselves certain pertinent questions.

At this point in time, in the middle of 2013, we occupy the presidency, with a president of Niger Delta stock, a Niger Delta first lady, and with the most significant of the president’s aides also having their roots in the Niger Delta. Additionally, we have Ex- Niger Delta Warlord Generals, having significant direct and regular access to the presidency, while also executing multi-billion Naira annual  security and surveillance contracts with respect to our maritime borders and our most significant export product [worth in excess of N25bn annually]; petroleum resources. Furthermore there is a presidential Amnesty program worth over N60bn annually, and well into its 4th year, and from which we are told some 33,000 [so-called ex-militants] have benefited. And finally there is the Niger Delta Ministry [well over 3 years old], as well as the special intervention agency, NDDC!

Let us not forget that since the 1999 return to civil rule, all the Niger Delta states have been governed by executives, legislatures and Judiciaries from the Niger Delta; while it is also true that under the rule of Niger Deltans, the region has received in federal allocations and derivation funds well in excess of N8tn since 1999.
The question begging to be asked is this; What has been the lot of the Niger Deltan Environment, as well as the teeming mass of Niger Deltans all through this period?

For starters, never in the entire history of the Niger Delta has the region’s environment been subjected to this level, scope and intensity of environmental degradation! We are speaking of a daily oil spill rate of well over 30,000 barrels per day, consistently over a period of more than 3 years!

We are speaking of a less than 20% completion rate for NDDC projects across the Niger Delta [according to the report of a Presidential Monitoring and assessment committee set up by President GEJ]! We are here making reference to a situation where the budget of a supposedly short-term intervention project, the Presidential Amnesty program [which has reached 33,000 supposed ex-militants; itself a fraud, for no nation could have survived a sustained militancy of more than 30,000 armed insurgents], has consistently dwarfed the budget of the Niger Delta Ministry, which is expected to tackle developmental challenges facing the Niger Delta! And we have also not factored into the calculation, the short changed annual budgets of the NDDC, which since its formation would have amounted to more than N1tn!

Yet inspite of all these huge investments under the direct control of Niger Deltans; and inspite of the opportunities presented by this moment in history, with a president of Niger Delta stock; what have we got to show for all these as ordinary Niger Deltans? What is the current state of infrastructure and basic services across the Niger Delta after all these years? Why are millions of Niger Delta youths still unemployed and unemployable? Why is the East-West Road still under construction [a state it has been in for more than two decades]?

Yes it is true we now have quite a few of us who have become fabulously and mind bogglingly rich in a short space of time; yes we now have Ex-Militant Generals who are multi-billionaires courtesy of maritime and oil pipeline security and surveillance contracts! And of course we now have politicians, and political office holders who have become some of the wealthiest Nigerians, and who have more palatial houses in Abuja, Lagos, and overseas than there are houses [huts included] in the villages of the Niger Delta from which they hail!

So was this what we fought for? Was this the reason why the Ogoni Bill of Rights; the Kiaima Declaration of Ijaw Youths; and the Manifesto of the Chikoko Movement were made/proclaimed/issued?

Those of us in whose name people are now embarking on a competitive drive towards obscene wealth accumulation; those of us whose lot has not changed, whose lots have in fact worsened in the years since 1999 [and we are in our tens of millions; we are the majority]; those of us victimized thrice; once by the colonialist, twice by the internal colonizers; and a third time by our own flesh and blood; we whose poverty and continued suffering has become the basis for their ill-gotten wealth and affluence; It is upto us to open our eyes, and understand that our destiny is in our own hands; and that only a struggling unity and solidarity of the oppressed and impoverished majority from across all of Nigeria; against these rabid blood sucking New and old Ruling elites; that only the fighting Unity of the exploited can pave the way for and guarantee our genuine and collective liberation and emancipation.

(Visit me at: takebacknigeria.blogspot.com; Follow me on Twitter: @jayegaskia & [DPSR]protesttopower; and Interract with me on FB: Jaye Gaskia & Take Back Nigeria).