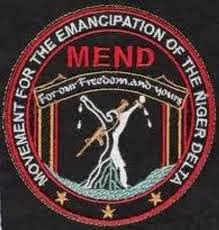 “And the fish that was in the river died; and the river stank, and the Egyptians (and Israelites) could not drink of the river; and there was blood throughout all the land of Egypt”. - Exodus 7: 21
The Movement for the Emancipation of the Niger Delta (MEND) regrets the collateral damage to the environment in Ogoni land and other communities in the Niger Delta caused by ravaging crude oil spills and gas leakages as a result of ‘Hurricane Exodus’. This first plague of blood is a sacrifice for freedom we will all have to endure.
Since our last update, ‘Hurricane Exodus’ continues to gather strength as it sweeps through the swamps and creeks in the Niger Delta leaving seriously damaged Trans Niger and Feeder pipe lines, harassed security operatives and scurrying oil workers in its wake.
Our efforts at sabotaging the oil sector is been complemented inadvertently by industrialised oil theft, aided and abetted by the security forces in the region such as the Joint Task Force (JTF), Eastern Naval Command, the Marine Police, the State Security Services (SSS) and the Nigerian Maritime and Safety Administration Agency (NIMASA).
As the Niger Delta is seen as a lucrative posting by personnel of the aforementioned agencies, financial returns are made on a monthly basis to the Service Chiefs, Inspector General of Police, Director General of the State Security Service and NIMASA as well as the Minister of Defence. Politicians at the highest level of government and some unscrupulous staff of the Nigerian National Petroleum Corporation (NNPC) are also involved in the racket.
Oil majors are been chased away, abandoning their on-shore assets or selling them off. This is our honest advise to unsuspecting buyers in a Niger Delta where the government of Goodluck Jonathan has refused to dialogue on the root issues, opting instead to delude itself, bribe a few miscreants and deceive the world that all is well because of misleading assurances and bad advice from a few selfish, greedy and myopic individuals.
Off-shore operations are not a safe haven. MEND has visited Bonga before and we will do it again when the time is right.
Jomo Gbomo
Posted by PublicInformationProjects at 10:59