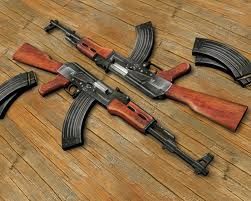 Report By:  Emmanuel Uzor (Onitsha)
Following the revelation of alleged gun running business in various markets within the commercial city of Onitsha and its environs, the leader of the Onitsha Main Market Amalgamated Traders’ Union , OMMATU, Chief Innocent Agudiegwu has denied that the market is the centre of arms and ammunition distribution in the zone.
Addressing journalists yesterday, Chief Agudiegwu described the allegation that the market has been involved in the illegal gun running business as baseless, adding that the market does not sell arms and ammunition to criminals as alleged.
“We received the news of the false allegation that this market is the centre of illicit gun running business as unfortunate and I wish to state it categorically clear that Onitsha does not sell arms and ammunition to criminals as alleged in the report. This Main market only deals with articles like cloth, bags, baby wears, men wears and other provisions like cream and has never been involved in any illicit gun running business” he said.
Chief Agudiegwu further disclosed that the market had stood tall in legal business and maintained that the market has no record of illegal business for more than 100 years and called on the public to disregard the allegation.
He said “this market has been in existence for more than 100 years now and has sustained the old Eastern Region and to tarnish this market’s image by false publication of alleged gun running was aimed at destroying this market which is our collective property and we shall intensify investigations to root out this market off of every bad egg.
The market leader also attributed the proliferation of arms in the state to inability of the country’s security agencies to man the country’s boarders and called for proper synergy between all the security agencies to tackle the proliferation of arms and ammunition.
“The increasing proliferation of arms and ammunition is not caused by the market in Onitsha as alleged by the reporter but the inability of the security agencies to man the boarder because our boarders with other neigbouring countries are very porous and until that is done, the country will continue to grapple with illegal proliferation of arms and ammunition”.
Posted by PublicInformationProjects at 08:31 No comments:

Posted by PublicInformationProjects at 08:24 No comments: