Opinion: Truth About Tenure Of LG Chairmen In Imo State

The issue of tenure of local government council chairmen and ward councilors in Imo State has been a subject of controversy for some time now. Sometime in 2011, former local government chairmen in the state alleged that they were removed from office. This they challenged in an Owerri High Court and the Imo State Chief Judge refused to order them back to office. This was later nullified by the Court of Appeal in Owerri and the sacked council bosses were ordered back to the office to complete their tenure. However, on the 8th of August 2012, the council chairmen’s tenure ended based on the Imo State local government administration Law No. 15 (as amended). The embattled former chairmen filed a fresh suit in an Owerri High Court claiming that their tenure was 3 years instead of 2 years. Subsequently, they filed a similar case at the Federal High Court Abuja.

It would be recalled that during Achike Udenwa’s regime in the state, the Imo State Local Government Administration Law No. 15 provided for a three-year tenure for elected officers in the state local government councils. Mid-way in Ikedi Ohakim’s tenure, the Bon Nwakanma-led Panel on Local Government reform was set up. In its final report, the panel recommended parliamentary system and two-year tenure for local government councils in the state. It would be remembered that when these recommendations were made public, it was highly criticized and the then Speaker Goodluck Opia-Led state legislature refused them. However, Ohakim lobbied the legislators and they passed the two-year term for the L.Gs and the law was signed accordingly by Ex-Governor Ikedi Ohakim sometime in June 2012. That is why the law is cites ‘as amended’. It was a one word amendment ‘three years was deleted and replaced with two years. Subsequently, the embattled former council chairmen and councilors were elected and sworn in on the 9th of August 2010.

When the tenure of the embattled former local government chairmen became an issue, some people said that Ex-Governor Ikedi Ohakim claimed that he did not sign the law. But when copy of the gazette law was made available, there was a twist in the claim of the former elected council officers. The claim was that though the law was signed, but that the process that brought them in like purchase of nomination forms etc started before the said law was signed. This now elicited the suits recently struck out by the High Court in Owerri and the one still pending at the Federal High Court.

I do not like giving in to sentiments. The present claim to stay in office beyond 8th of August 2012 is absurd, illegal and capable of grinding the state to a halt.

When Ohakim and the PDP selfishly refused to allow the three-year tenure to be, they did not know that they were indirectly shooting themselves on the leg. That is why it is not good to be wicked and selfish. There is an Igbo adage that says that it is good to chase away a fowl that is matching its legs on excreta because nobody knows who will eat the legs. Today, one of Ohakim’s wickedness with PDP has backfired and ‘the accused has turned to a complainant’. Assuming Ohakim had come for a second term, this issue of tenure wouldn’t have arisen. 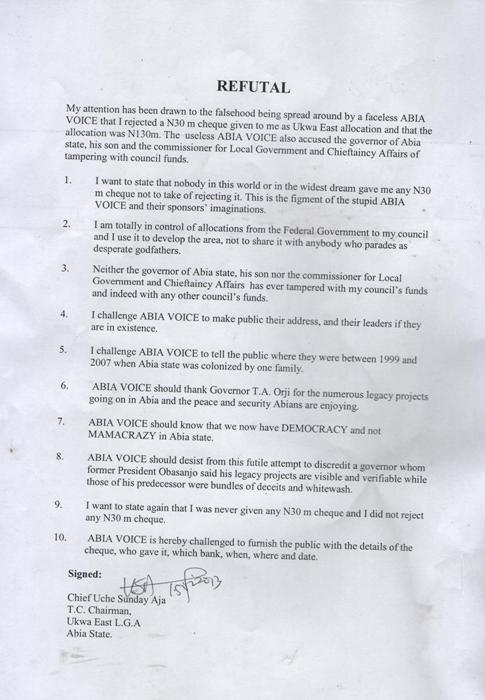 Posted by PublicInformationProjects at 00:54 No comments:


Posted by PublicInformationProjects at 00:40 No comments:

Videonews: Will Arsenal Finish In The TOP 4?

Posted by PublicInformationProjects at 00:25 No comments: