The Campaign for Democracy (CD), South-East Region has urged Gov. Peter Obi to disband the Anambra State Traffic Agency (ASTA) due to the agency’s anti-people activities.

This was contained in a statement issued to newsmen by CD in Onitsha , Anambra on Tuesday; signed by Dede Uzor A. Uzor, Chairman of the South-East Region.

``ASTA is becoming a big menace to residents and visitors to Anambra State. The agency’s primary duty is to decongest traffic in the state, but it had been turned to a money spinning business for the officials”.

``Recently a trader in Onitsha Drug Market, Bridge-Head, called Mojo, had his vehicle ransacked by ASTA officials along Awka Road in Onitsha metropolis and collected his N400,000 meant to be paid into his customer's account”.

``Three policewomen, who were on official duty in the state, were forcefully taken to the ASTA office at GRA, Onitsha, following the inability of the police officers to pay N20,000 for alleged illegal parking. The officers were asked to lie on the ground before the intervention of the DPO of Central Police Station”.

``A man simply identified as Monday from Benin, who came for shopping at Main Market, Onitsha; had his N90,000 collected from him for making illegal U-turn,’’ the statement said.

CD said it is giving Gov. Obi three days to disband the agency and save the state from further embarrassments.
Posted by PublicInformationProjects at 01:31 No comments: 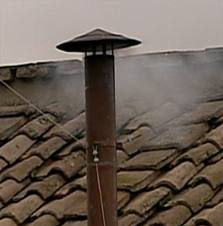 The world
Watched the chimney,
Imploring the mute messenger
To send forth
The white smoke,
Signal
That there is a papa.

In spite of supplications,
The mute messenger
Sent forth
The black smoke,
Signal
That there is no papa.

The red robes
Rebelled against reason
And there was a resigned papa.
The mute messenger
Sent forth
The white smoke,
The grand lodges
Grinned.
Posted by PublicInformationProjects at 00:31 No comments:

Videonews: Millions Of Dollars In Diamonds Vanish In Daring Heist

Posted by PublicInformationProjects at 00:28 No comments: