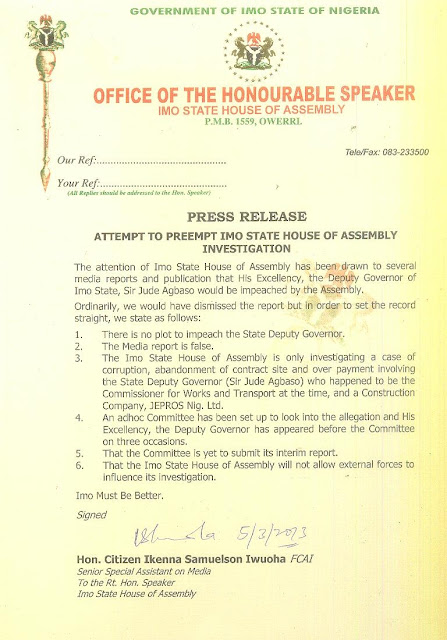 Posted by PublicInformationProjects at 10:30 No comments:

I thank God for your full recovery. Your Thanksgiving and Burnt Offering to God were awesome. I will continue to pray for you and your lovely Husband, our President, Dr Goodluck Ebele Jonathan for God’s protection and guidance in all your undertakings and services to the Nigeria.

I write you this letter with a heavy heart and with tears in my eyes. I have not stopped crying after reading an article that went viral on the internet on the 18 February, 2013 with the caption IS MALE CHAUVINISM A STANDING ORDER IN EBONYI HOUSE OF ASSEMBLY? written by one Sam Asoluka. My heart is burdened because I am a citizen, student, and an indigene of Ivo Constituency. I am in tears because I am woman, a fiancee to a gentleman who is not from Ebonyi State, Nigeria.

The said article got me thinking especially as my fiance is not from my state, Ebonyi. I am now worried because it seems marrying outside my state downgrades my Nigerian citizenship or makes me a second class citizen in my husband’s state. I am more worried because as a woman who intends to marry outside my state, I may face the same problem Honourable Mrs Lillian Igwe is facing in my home state’s House of Assembly.

The purpose of this letter is to draw your attention to the plight of Honourable Lady, Lillian Igwe, and PDP Member Representing Ivo Constituency in Ebonyi House of Assembly. And to help put an end to this ‘Marriage–crime’ that has taken a strong root in Ebonyi State House of Assembly from spreading to other states in Nigeria.

Marriage is not a crime. It is an ordained relationship by God and our politicians should not be allowed to ruin or destroy this revered family setting because of selfishness. And as an aspiring politician, I don’t want to be victimized when I marry my heartthrob and move to live with him in his state which automatically becomes my home and state.

Your Excellency, the plight of Honourable Mrs Lillian Igwe is mind boggling. She was suspended from Ebonyi House of Assembly last year on the lame charges of drunkenness and for coming to the House of Assembly in a Keke Napep. But the truth is that Honourable Igwe’s sin is that she is not from Ebonyi State. She is from Okirika in Rivers State and married to an Ebonyi man.  But she won the Ivo Constituency for PDP in a democratically conducted election in 2011.

Since her victory in the election, she has not known peace in the House of Assembly. The male dominated Assembly has done everything in their power to rubbish her because she is an outsider and a woman. These so called honourable members of the Assembly have ceaselessly bullied and emotionally tortured Mrs Igwe because she refused to do their bidding. Hence they came up with the obnoxious claim that she drank herself to stupor and comes to the House in Keke Napep.

Honourable Mrs Igwe does not drink alcohol. And, I wonder when it has become a crime in Nigeria to ride in a tricycle to work. This is just a matter of giving dog a bad name to hang it and how low Ebonyi House of Assembly has degenerated

Your Excellency, I am calling your attention to this Ebonyi House of Assembly imbroglio because you have worked hard in empowering women in Nigeria and what is happening in my State Ebonyi, tantamount to putting spanners to the good work you and other notable Nigerian women have done for most of us who are aspiring to serve our fatherland in various capacities.

Honourable Mrs Igwe is a hardworking woman and a mother of young children. She is an astutely politician and has robustly represented us in the Assembly. She is no more an outsider in Ebonyi State. She is now an indigene of Ivo by marriage and some of us are hoping to be indigenes of other states by marriage soon.

Your Excellency, I urge you to please use your good offices to look into what is currently going on in Ebonyi House of Assembly. Mrs Igwe is unjustly being victimized because she is from Okirika in River state. Your urgent intervention in this matter will stop further emasculation of helpless people of Ivo and their Assembly Member Honourable Mrs Lillian Igwe by these ruthless men in Ebonyi House of Assembly.

Thank you. And happy Mothers Day in advance


Posted by PublicInformationProjects at 07:15 No comments:


Report By: Publicity Unit Of Campaign For Democracy; South-East Region

The Campaign for Democracy (CD) has urged the South-East governors to intervene in the current closure of Ladipo Market in Lagos State due to its economic importance to Ndi-Igbo.

This was contained in a statement issued to newsmen in Onitsha, Anambra State on Monday.

The statement said that closing the entire market for mere alleged non conduct of environmental sanitation exercise is a denial of the economic right of thousands of traders as well as millions of people in Lagos and the country benefiting from the market.

``We want the South-East governors, traditional rulers and the Oba of Lagos to prevail on the Lagos State governor to reverse the directive and open the market in the interest of the economic right of Nigerians affected by the market closure”.

``The governors through the Nigeria Governors’ Forum (NGF) should warn Lagos State governor over taking inhuman actions since it is widely believed that Lagos is a multi-ethnic settlement”.

``President Goodluck Jonathan should intervene and talk to the Lagos State governor to weigh actions before taking them,’’ The statement said.

The statement further said that the present development where little provocation would lead to immeasurable action against the citizens of the state was uncalled for.


Posted by PublicInformationProjects at 00:30 No comments:


Report By: Publicity Unit Of Campaign For Democracy; South-East Region

The Campaign for Democracy (CD), South-East Region has issued a 7-day ultimatum to Mr. Mohammed Kastina, Imo State Police Commissioner to find and free a businessman, Chief Emeka Aseme, who had been kidnapped over a week ago.

``The ultimatum also covered the tracking down of the six-man gang, who also killed two policemen from the Oguta Divisional Police Headquarters on the fateful day,’’ CD said in a statement.

The statement, which was signed by Dede Uzor A. Uzor, Chairman, CD South-East Region, was issued to newsmen on Monday in Onitsha, Anambra State.

It would be recalled that a six-man gang of kidnappers, who were dressed in army camouflage, on Feb. 24 abducted Chief Emeka Aseme; while they killed two policemen from Oguta Police Divisional Headquarter that engaged them in a gun duel.

``It is clear that Imo State is now recording the highest incidents of kidnapping in the South-East and the country in general”.

``We are calling on the CP Kastina to live up to his constitutional responsibility of protecting Imo State citizens”.

``We want him to evolve a pragmatic approach to tracking down the rising wave of kidnapping, which is already scaring away potential investors and property developers from Imo State,’’ the statement said.

The statement also urged Imo people to be vigilant and report any visible suspicious movement as well as strange faces to law enforcement agencies.