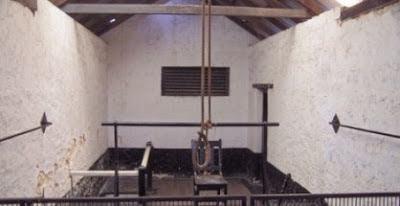 This is the update  on Mr. Thankgod Ebhos 53yrs, was the 5th person taken to Gallows along with  the 4 executed inmates in Benin prison on 24 June 2013, Thankgod was brought out from the gallows and returned back to cell, when the Judge was reading his death warrant signed in 1997 by Ahmed Ali, then Military Administrator of Kaduna state, it was written he should be executed by public execution in the city of Kaduna by Nigerian army 1st mechanize Division Kaduna state, the hangman (Executioner) said

He was charged Arm-Robbery, charge No: KD/ART/4/90, he was arrested on 28 March 1988, sentenced to death on 30th May 1995 by Hon. Justice J.S Abiriye of Kaduna State Robbery and Firearms Tribunal holding at High Court of Justice Kaduna state Nigeria, he is native of Ekpoma in Edo state, he is musician by profession.

On 24th June 2013 Mr. Thankgod Ebhos 53yrs witness the execution of the four death row prisoners: Chima Ijiofor 43yrs, Daniel Nsofor 39yrs, Osarenwinda Aiguokhan 49yrs, Richard Igagu 49yrs, the planned execution by firing squad of Mr. Thankgod Ebhos 53yrs by the prisons Authorities after witnessing the execution of 4 inmates constitutes Mental Torture and amounts to inhuman and degrading treatment contrary  to section 34 (1) (a) of the constitution of the Federal Republic of Nigeria, 1999 as amended, and Article 5 of the African Charter on Human and people's Rights (Ratification and Enforcement ) Act.

1.That it would amount to torture, cruel, inhuman and degrading treatment for the Nigerian Prisons Authorities  to execute Mr. Thankgod Ebhos 53yrs after  he has  suffered long and severe trauma, anxiety and suspense of imminent death while on death row.

2.That Section 11 of Robbery and Firearms (Special Provision) Act under which removes the right ofMr. Thankgod Ebhos  to appeal against his conviction and sentence to death amounts a gross violation of the right of Mr. Thankgod Ebhos to appeal against his said conviction and sentence and therefore contravenes section 36 of the 1999 Constitution and Article 7 of the African Charter on Human and People’s Rights (Ratification and Enforcement) Act.

3. Human Rights Social Development and Environmental foundation (HURSDEF) appeal to the President of Federal republic of Nigeria to commute the death sentence passed on Mr. Thankgod Ebhos to life imprisonment or terms of imprisonment.
thanks,


Posted by PublicInformationProjects at 05:57 No comments:

Total  announces that its subsidiary Total Upstream Nigeria Limited (TUPNI), operator of the OML 130 block, and co-venturers have obtained the necessary approvals from Nigerian National Petroleum Corporation to award the main EPC contracts for the development of the offshore Egina field.

The field, discovered in 2003, is located in water depths of around 1,600 meters, 200 kilometers offshore Port Harcourt and 20 kilometers southwest of the Akpo field, located on the same license.

“Egina is the second development of the OML 130 license. Following Akpo, which was brought on stream in 2009, it will add significant value to the partnership. With more than 21 million man-hours of local work, the project will make a material contribution to the development of Nigerian economy. After more than 50 years in the country, we are confident that Nigeria will continue to provide a suitable framework to promote investments” commented Yves-Louis Darricarrère, President of Upstream at Total.

The field development plan calls for 44 wells connected to a 330 meter-long floating production, storage and offloading (FPSO) vessel with a storage capacity of 2.3 million barrels. The design of the FPSO includes capacity for future developments of nearby discoveries. First oil is expected end-2017, with output reaching 200,000 barrels of oil per day at plateau.

Total Exploration And Production In Nigeria:
In 2012, Total celebrates fifty years of its presence in Nigeria. The Group’s production in Nigeria was at 279,000 barrels of oil equivalent per day in 2012.

Deepwater developments are one of Total’s main growth avenues in Nigeria, where the Group operates the Akpo field in OML 130 and is also preparing to develop the Egina field in the same lease.

Offshore production also comes from OMLs 99, 100 and 102, which are operated by the Group as part of a joint-venture with NNPC. The main fields in these leases are Amenam-Kpono, Edikan and Ofon. Total recently commenced the second phase of the Ofon development which is mostly intended to recover natural gas reserves. Ofon phase 2 is a step forward in the Group’s plan to reduce its gas flaring and greenhouse gas emissions.

Total’s onshore production comes from OML 58, which it also operates as part of its joint-venture with NNPC. A project is underway to increase the lease’s natural gas and condensate production capacity to supply the domestic market.

In addition, Total has significant equity production in Nigeria from its interests in non-operated ventures, particularly the NNPC/SPDC joint venture (10%) and SNEPCO operated PSC (12.5%), which includes the Bonga field. Total also has a 15% interest in Nigeria LNG, whose liquefied natural gas production capacity was increased to 21.9 million metric tons per year when Train 6 was brought on stream in late 2007.

Total deploys an assertive local content policy in Nigeria, with locally worked hours accounting for 60% and 90% respectively for Usan and OML 58 projects, and likely to reach 75% for Egina. The Group is also helping Nigerian contractors to build deepwater expertise, especially in the Niger Delta, a region that is home to more than half of Total’s Nigerian employees and most of its operations in the country.

Posted by PublicInformationProjects at 01:48 No comments: