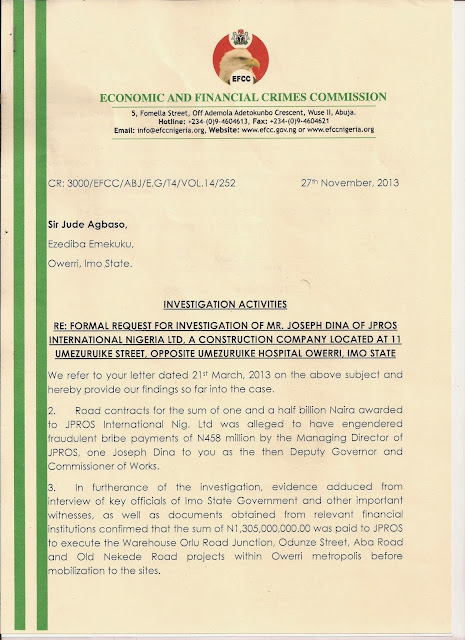 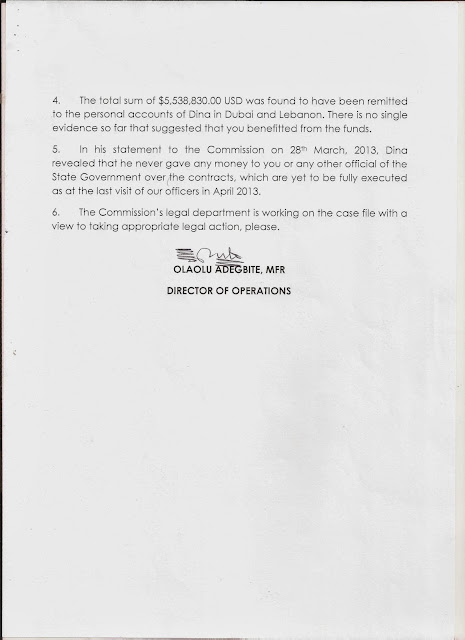 Posted by PublicInformationProjects at 10:49 No comments:

Report By E.N Iwuala
THE Economic and Financial Crimes Commission, EFCC, has cleared the impeached deputy governor of Imo State, Mr. Jude Agbaso of alleged N458 million bribery for which he was removed from office.

In a statement by its Director of Operations, Mr. Olaolu Adegbite, the EFCC said though the former deputy governor had been exonerated, following its findings, the commission’s legal department was, however, working on the case file with a view to taking appropriate legal action.

The commission disclosed that in the cause of its investigation, Mr. Dina, the contractor that allegedly gave him bribe in his statement to the commission on March 28, 2013, revealed that he never gave any money to Agbaso or any other official of the state government over the contracts, which were yet to be fully executed as at the last visit of its officers in April 2013.

Mr. Agbaso had petitioned the EFCC to investigate the Managing Director of J-PROS, Mr. Joseph Dina.

In its report, the commission stated: “Road contracts for the sum of one and a half billion Naira awarded to J-PROS International Nig. Ltd was alleged to have engendered fraudulent bribe payments of N458 million by Managing Director of J-PROS, one Joseph Dina, to you as the then deputy governor and Commissioner for Works.

“In furtherance to the investigation, evidence adduced from interview of key officials of Imo State Government and other important witnesses, as well as documents obtained from relevant financial institutions confirmed that N1,305000,000 was paid to J-PROS to execute the Warehouse Orlu road Junction, Odunze street, Aba road and Old Nekede road projects within Owerri metropolis before mobilisation to the sites.

“The total sum of $5,538,830 was found to have been remitted to the personal accounts of Dina in Dubai and Lebanon. There is no single evidence so far that suggested that you benefited from the funds.”

It will be recalled that the State House of Assembly, in March 2013, impeached Agbaso, who was the Imo State Deputy Governor after a seven-man panel headed by Justice G.C. Ihekire, concluded its investigation.

Agbaso was accused of allegedly taking N458m bribe from a Lebanese firm, J-PROS, in charge of the rehabilitation of the Sam Mbakwe Road in Owerri, the state capital.

He was removed from office after 26 out of 27 lawmakers voted for his impeachment.

Posted by PublicInformationProjects at 10:23 No comments:

We begin with the paraphrasing of the verse from Y.B Yates brought to popular consciousness by our own Chinua Achebe; 'We returned to our places, these kingdoms; but it is no longer at ease here with the old dispensation, with an alien people still clutching at their godfathers.....'

If there are still any persons left that are yet to accept the reality of a critical, and fundamental crisis of governance within the classes - ruling and subordinate alike]; and between the classes; then the events of the recent weeks ought to be clear enough a manifestation for every conscious person to at the very least begin to discern the monumental challenges that confront us as a people and nation; as well as the historic opportunities that open up because of these challenges.

Lenin it was who while analysing and writing[as well as preparing for the Russian Revolutions] on the crisis of revolutionary proportions which confronted the world at the turn of the last [20th] century who identified some very basic but key conditions for revolution to take place: The first being that the crisis is of such a proportion that the ruling classes can no longer rule in the old ways! The second, being that conversely, the exploited and subordinate classes are no longer willing to be ruled in the old ways.

Now all of these elements are present in the current national and global scenario, and have been present since the global onset of the current all embracing crisis with the food crisis of 2007, and the financial crunch of 2007/2008. What has been missing is the third condition; the availability of a conscious political vanguard of the exploited and subordinate classes, that can direct and coordinate the disparate responses and activities of the poor and channel this towards a conscious contestation for power, and in the first instance, state power!

Let us take a deep, critical, reflective and dispassionate look at the current situation in our country; a crisis that has been unfolding and deepening since 2007, and which reached an apogee during the January Uprising of 2012!

The ruling party got split into three components - the PDM, the New PDP, and the Old PDP. The new PDP has announced its intention to merge with the opposition APC; and even in this it itself risks a split within the New PDP. The Old PDP, remains still at war with itself! The most significant indication of this is it's contradictory response to the electoral sham in Anambra during the Governorship elections.

The APC, a recent merger of major opposition parties is itself going through its own internal turmoil. In Ekiti state, there has been a split from the party with the splitters moving into that unashamed commercial political sex worker of a party called the Labour Party; the most significant stock exchange party existing in the country, where rejected  dissident politicians from other main parties, can for the appropriate fee, buy the party's ticket for any office!  In Anambra state on the other hand; CPC, one of the major constituent parties of the merged APC, was one of the 16 so-called political parties that came out to affirm the fairness and freeness of an election, that the main umpire itself has admitted suffered major lapses, up to the point of raising the allegation of sabotage!  The point being made is that this behemoth of an opposition party, even much more than the ruling PDP it seeks so desperately to displace; is a marriage of strange, if not antagonistic  bedfellows! This merged party which is still eagerly approaching and trying to swallow up other dissidents, is still parading an interim national leadership; and is yet to conduct any national or state conventions for the purposes of electing party leaders! It is a party united more by the desire of its disparate members to unseat the PDP and take over power, than by any common ideological or programmatic vision of transformation of the conditions of living and existence of our people.

What can we say about the other parties? Well a majority of them are just waiting for the next big man of small big man to decamp from one of the parties and then consider their party as a platform to realise their puny ambitions.

And, oh of course, less i forget, there is also APGA. Which APGA? Which of the factions/ Or Fractions within factions is being referred to?

The scenarios painted above represent very distinct and clear frontlines of the intra class struggle within the thieving, light fingered, treasury looting ruling class. What about the dimensions of the inter-class struggle; between the exploiters [the top 10% of the population that own and control 41% of national wealth], and the exploited [the bottom 20% of the population that control and own only 4.1% of national wealth; or the bottom 50% of the population that own and control only 20% of national wealth]? What about these ongoing now open, now covert struggle between the classes? The crisis in Education and the marathon strikes of academic staff at one point or the other during this year, across tertiary education [ASUU, ASUP, COESAU], is one of the most dramatic manifestation of this inter class struggle [along with the threats of treason, and mass sacks]!

But so was the January Uprising of 2012, in even more significant and poignant ways! The Health sector has also witnessed unprecedented mass general strikes over the last few years; as have other sectors at national and state levels.

And an example of the of intra class struggle among the poor, exploited and subordinate classes? Well look no further; the crisis in tertiary education is also manifested in the attitude of the non teaching/non academic staff unions to the struggles and demands of the academic staff unions? Every struggle, demand and strike by academic staff has very often been opposed and stridently too by the non academic staff [junior and senior alike]. Or the situation when every time a corrupt politician is exposed, crowds of poor and exploited youths and older persons including toddlers and children are rented to participate in 'paid for rallies' to suppose their son or daughter, and insist that their son or daughter should not neither be exposed nor punished for dipping their dirty fingers into our collective teal!

So now we see clearly the current context, and the scale and scope of crisis within and between the classes. If we quickly note that the context within which these political and social crisis is taking place, is that occasioned and driven by a economic crisis of historic proportions; then we can understand, that these holistic and all embracing crisis when flipped on the other side like a coin, also presents immense historic opportunity!

First a quick summary of the socio-economic crises; poverty levels of 70% [relative] and 46% [abject]; one that rose from 54% [relative] in 2001 to 70% in 2012; unprecedented high unemployment figures that rose from 9% in 2001 to 23.9% in 2012, along with a 45 to 50% unemployment rate for youths between 18 and 35 years of age; or is it the rate of treasury looting that now hovers above N220bn per month figure; with kidnapping for ransome and crude oil theft now some of the most profitable industrial sectors of the informal economy? Just check that inspite of annual security and surveillance contract in excess of N30bn annually to 6 militant generals and their crews; crude oil theft has shot up from less than 200,000 barrels per day prior to 2010, to more than 400,000 barrels per day in 2013, amounting to a colossal loss of nearly $18bn annually!

This is the context within which, and the background within which the political crises is unfolding; so much so that the ruling class is finding that it can no longer rule in the old ways; while the exploited classes are also refusing to be ruled in the old ways!

And it is this context that provides the historic opportunity, that this generation of Nigerian patriots, activists, and active citizens are called upon to seize, and take advantage of. It is important for us to build the type of mass, and popular political movement, autonomous of political Godfathers, and independent of the ruling class political platforms; to organise our resistance, mobilise our anger; and undertake our frontal cahllenge of the thieving and historically inept and corrupt ruling class for power!

It is up to us to take our destiny into our own hands; It is time we organise and mobilise to Take Back Nigeria; And Now!

Posted by PublicInformationProjects at 00:30 No comments: