Article: The Nigeria Anti-gay Law And The US Abortion Law 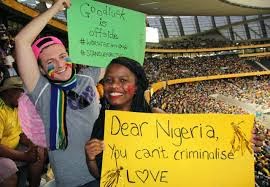 By Kayode Ajulo, Esq.
The right of every nation state to make internal legislation without interference from others is recognized under international law. This right defines the relationship that exists between international law and domestic legal systems and, more specifically, in determining which law has priority.

With particular reference to the Anti Same-Sex Marriage legislation recently signed into law by the Nigeria’s President, H. E. Dr. Goodluck Jonathan that has resulted in wide condemnation by Western nations, I cannot deny my personal anguish, because it sets two legal disciplines to which I am subjugated – setting one against the other and contradictory answers in contention from both discipline.

The new Nigeria’s anti Same-Sex Marriage law penalizes any engagement same sex marriage or civil union, 14-year jail term is for the offenders and 10-year term for any one who directly or indirectly publicly exhibit same-sex affectionate affairs. The law also proclaims that any same-sex marriage contracted abroad will not be valid in Nigeria.

However, I must admit that neither of these counter-posed systems seem conclusively superior to the other. Empirical experience tends to suggest that national judicial systems resist harmonious subordination within an international legal framework and for this reason it is not surprising that Charles Rousseau recognized that it is difficult to find in international practice anything to confirm either the supremacy of international law or that of the domestic judicial order[3].

For the most part of past centuries, scholars of constitutional law, have ignored these conflicts and focused more on the domestic judicial system and have persistently opined on the proposition that the constitution holds primacy over all existing law[4]. In few instances that they have scrutinized this relationship[5], they clearly assign priority to domestic laws[6].

With the establishment of supremacy in laws[7] into the significance and depth of the controversy surrounding Anti Same-Sex Marriage legislation in Nigeria certain facts of importance call for legal clarification in other to justify this legislation.

Save and except in support of the supremacy of domestic laws, a violation of the Anti Same-Sex Marriage legislation must come under the ambit of fundamental human right laws which already has international protection in the area of discrimination and association.

Same-Sex Marriage cannot legally be a right to be entrenched in fundamental human right because it is not all encompassing to qualify as a right on its own but wrongs committed against  Same-Sex may accrue to them some legal remedy which are subject to exercise of a domestic law.

For example in the United States of America, the government made possible the requisite ratifications for the human right convention to enter into force but did not ratify it.

One of the principal reasons for that failure to ratify was the conflict between the Convention and the statutes of several States of the United States of America.

Article 4(1) of the Convention protects the Right to Life, and adds that "[t]his right shall be protected by law, and, in general, from the Moment of conception’[8].

The situation then just like the Anti Same-Sex Marriage legislation in Nigeria which now conflicts with America’s legislation that established a woman's right to an abortion without medical or legal justification in clear and outright violation of the fundamental human Right to Life.

The right to an abortion is presently a very controversial subject in the United States. The arguments on both sides are couched in strong religious terms just like the Gay-rights debate in Nigeria and the only way to resolve this is a Federal Law similar to the position that has now been taken by the Nigeria government.

As in the United States situation, the frailty of attempts to give priority to international law when confronted by an immediate reality of internal legal controversies is akin to the situation faced in the Nigeria that necessitated the Anti Same-Sex Marriage law which was passed based on domestic circumstances.

Encountered with the Unite States example of an Abortion Law that counters the Fundamental Human Right to Life aside with Anti Same-Sex Marriage Legislation in Nigeria and America’s condemnation of the Nigeria Government, I cannot do less than to conclude by recalling the words of Konrad Lorenz who, after extensive study of animals, was able to develop a number of profound observations on mankind that if -
"man is not by nature as bad as the Book of Genesis affirms. . . he is not as good as our modern life demands[9]’’.

Whether a nation state that is a signatory to international accepted principles can make legislation that may tend to violate those principles in my view will be conflicting and raise serious grounds of questioning. In my opinion the ratification of the Convention implies acceptance of the obligation to guarantee the exercise of all the rights recognized by it. By accepting this obligation, the state assumes the duty to harmonize its domestic legislation with the norms of that Convention.

2.  BALANCE IN AN INFORMED LAW-MAKING PROCESS WITH RESPECT TO ANTI SAME-SEX MARRIAGE LEGISLATION IN NIGERIA – MY PERSONAL OPINON AND RECOMENDATION.

The balance here as well as what is the solution would have been a law in form of regulations of Same Sex activities in public domain. The following measures are suggested:

Regulation in the form of forbidding the exhibition of such act in public glare in order not to offend others who due to their religious belief or other sentiment, may be disturbed.

This is the case in Europe in respect of restriction placed on smoking in public places as against a total ban. Similar to this is the regulation against nudity and sexual  acts in public places which is common in most societies.

B. PENALTY FOR VIOLATING REGULATIONS:

Penalty for violation of such behavioural regulations may be on- the-spot fines to culprits or a charge to court to offer an explanation to the judge for breaking the law which in most cases may incur a fine in court or an order for imprisonment depending on the merits of each case.

3.  LEGAL IMPLICATIONS OF THE ANTI SAME-SEX MARRIAGE LEGISLATION IN NIGERIA:

As a safety tip against flouting international law on human right to which Nigeria is a signatory, a similar situation should have been envisage as the balance to be legislated in adherence to fundamental human right that is now being subjected to international condemnation by the same people whose domestic laws on abortion contradicts the right to life.

The unreasonableness of Anti Same-Sex Marriage law in Nigeria is only traceable to its conflict with domestic laws of other countries condemning same and not that such law is international entrenched as part of human right is itself condemnable.

Save and except the position is change and made to reflect the present reality as advised above in the balance by way of regulation then every gay must continue to challenge every violation in Nigeria under the international human right law or face the consequences of the law.
4.  SAMPLED OPINION FROM NIGERIANS ON THE NEW LEGISLATION:

From a random sample of 5000 people questioned by Egalitarian Mission Africa as to the merits and demerits of the Anti Same Sex Marriage Legislation.

The majority opinion as stated above is clearly in favour of the Legislation.

A major flaw of the new law is that it was made from one sided debate because for failure if the National Assembly or the Legislative to sample opinion widely from different quarters. More so that in arriving at their conclusions legislative did not invite those that would be affected to participate in deliberation in order for the law to have a wider acceptance.
The law were deliberated on, voted on and passed by those who themselves are predominantly not homosexual or lesbian or those objecting to the same-sex practice or those whose opinion may have been formed out of their religious beliefs without having consideration as to their reasons of importance.

There is the need for full understanding of the phenomenon of same-sex lifestyle and the need to protect the generality of the public that can’t stand it. The same way the anti-smoking law is promulgated but limited to the private walls.

Issues surrounding the same-sex marriage should be guided by deliberation, research and consultations, hence I have elected to stand in the middle, neutral and devoid of controversy except to defend the Constitution of the Federal Republic of Nigeria as well as to urge that there should be neither celebration of it as the Western world is doing nor provocation about it as African governments are doing now.

(Ajulo is a Legal Practitioner and Chairman, Egalitarian Mission Africa
Abuja, Nigeria. He can be reached via +234 803 315 4349, kayode.ajulo.co@gmail.com)