News Release: It Is Time To Rescue And Bring Back Our Girls 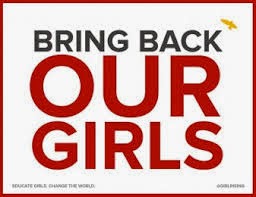 The Christian Foundation for Social Justice and Equity totally condemn the April 14, 2014 abduction of about 234 school girls of the Government Girl’s Secondary School while preparing for the West African Senior School Certificate Examination in Chibok, Borno State.

The Islamic Sect, Boko-Haram on May 5, 2014 claimed responsibility of the abduction. The British Broadcasting Corporation (BBC) Hausa Service citing a 57 minute video obtained by the Agence France - Press (AFP) quoted the leader of the sect, Abubakar Shekau: “I abducted your girls, by Allah, I will sell them in the market and Allah has commanded me to sell them in the market”. “There is a market for selling human beings”.

Shekau who spoke in Hausa and Arabic language interchangeably noted that western education is a sin, it is forbidden, and women must go and marry. He regarded the girls as war booties upon whom his group has right over. “We would also give their hands in marriage at the age of nine or twelve depending on our choice“.

This is a very worrying and disturbing development for us as an organization, as we view this as a new trend that could gallop in no distant time if these girls are not urgently rescued as it is capable of increasing forceful and child marriage in the country geometrically. Also, young girls could become the next target for the monsters to be used as sex slaves.

He further stated in the video that the abduction of the girls was justifiable and would be held the way their colleagues were kept in various detention cells of the military” without any negotiations”.  More so, an intermediary of the Boko-Haram indicated that two of the girls abducted have died from snake bite while twenty others are critically ill.

The window of opportunity of rescuing these innocent girls is closing fast and that is why it is expedient and imperative that the security agencies intensifies the effort to rescue them as Nigeria cannot afford to lose any of these girls any longer. It is an established fact that the girls are already living under the permanent threat of gun, sexual and physical abuse including rape  and psychologically traumatized.

The Nigerian government at all levels,  security agencies, Civil Society Organizations, Non-Governmental Organizations, the Clergy, the media, parents, indeed, every Nigerian must come together to condemn and fight this abominable crime which is damning not just on today’s Nigerian but the future of the country.

Christian Foundation for Social Justice and Equity therefore demands the immediate release of the abducted girls and an end to terrorism in Nigeria. We also demand for improved security across the length and breadth of the country as insecurity is growing by the day unchecked.

The Time to act is Now!